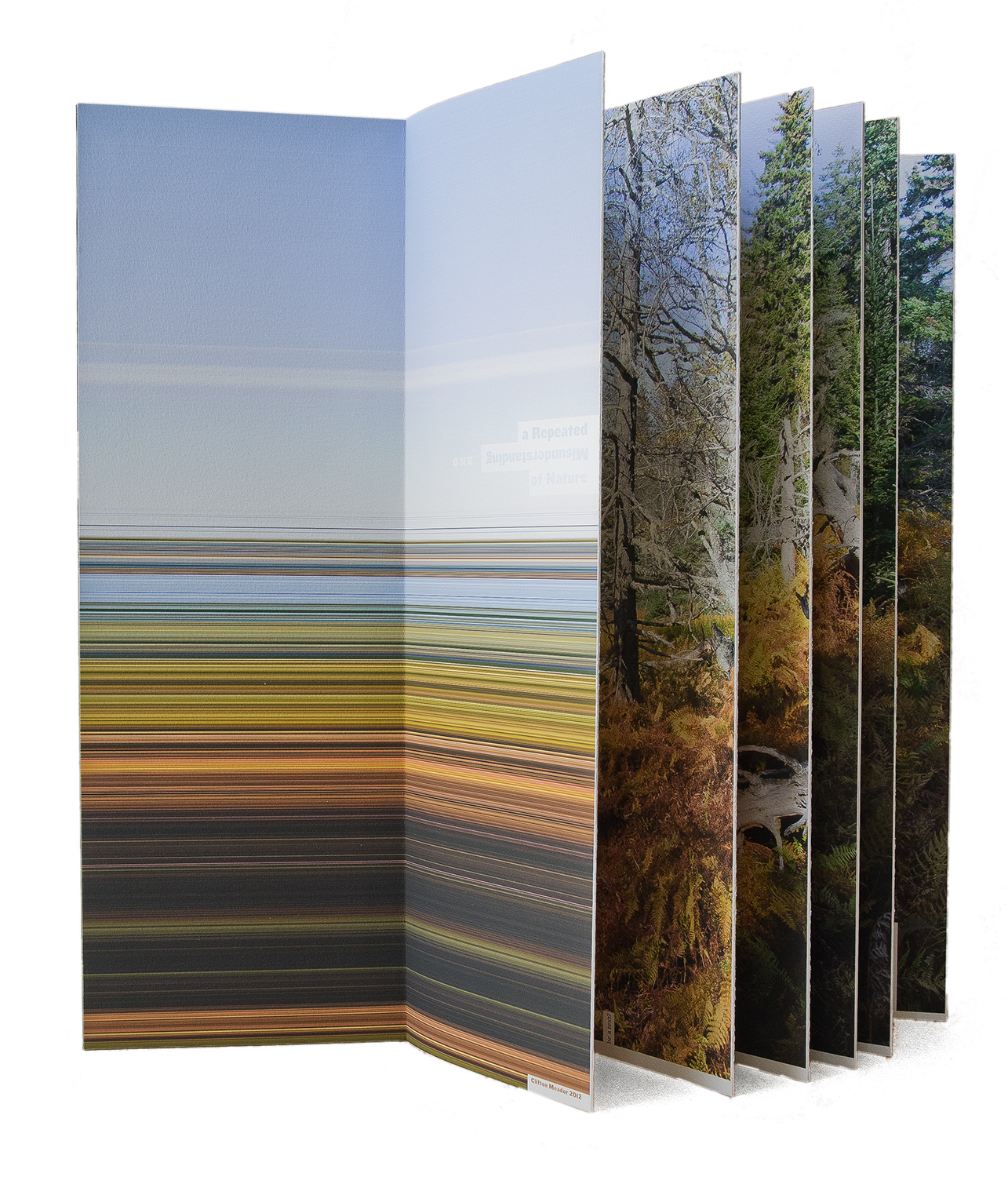 Minnesota Center for Book Arts (MCBA) is proud to announce the winner of the 2013 MCBA Prize, A Repeated Misunderstanding of Nature by Chicago-based book artist Clifton Meador.

For the 2013 competition, a three-member jury reviewed 192 submissions from over 160 artists representing 22 nations around the world, and narrowed the field to five finalists. These five works were judged at MCBA during Book Art Biennial 2013 (BookArtBiennial.org), a two-day academic symposium on contemporary practice in the book arts. The winner was announced at a gala award ceremony on Saturday, July 27.

Meador’s work, A Repeated Misunderstanding of Nature (2012) is a set of five leporello books, each presenting a sequence of woodland images from Vinalhaven Island in Maine. The border of each image includes a text from a long, imaginary lecture by a professor who — even though he sounds convinced — is actually confused about how to understand nature: he drifts between thinking of nature as something to read and nature as an anthropomorphic presence. This work was inspired by Chinese literati landscape painting, a mode of art that used images of nature as a vocabulary rather than as representation of specific landscapes. For these literati, landscape was a metaphor for personal experience; for the confused professor in A Repeated Misunderstanding of Nature, these pictures of the autumnal forests of Maine become a text that defeats reading. The book was composed through archival inkjet, offset litho and letterpress printing, housed in a laser-cut birch plywood case.

In addition to the title, Meador receives a $2,500 cash prize. The four finalists each receive a $500 cash award.

The MCBA Prize 2013 jury consists of:
Sarah Bodman, Senior Research Fellow for Artists’ Books at the Centre for Fine Print Research (CFPR), University of the West of England;
Sandra Kroupa, Curator of Book Arts and Rare Books at the University of Washington Libraries;
Buzz Spector, book, installation and mixed media artist, and Dean of the College and Graduate School of Art in the Sam Fox School of Design and Visual Arts at Washington University in St. Louis.

All eight honored works will remain on display at MCBA through August 4, 2013.

View all of the entries for The MCBA Prize 2013 in MCBA’s online gallery, MCBAPrize.org.

The MCBA Prize was presented in conjunction with Book Art Biennial 2013 (July 25-28), a series of events, exhibitions and workshops that explore contemporary practice in the book arts. This year’s Biennial programming explored the intersections between book art and film. Historically as well as in contemporary practice, artists blur and perforate the boundaries between these two disciplines, both of which are time-based and grounded in sequential visual communication. From examinations of contemporary innovations in visual narrative to the influence of classic filmmaking on mid-century book design, the Book Art Biennial 2013 Symposium continues a tradition of stimulating critical thinking and dialogue.