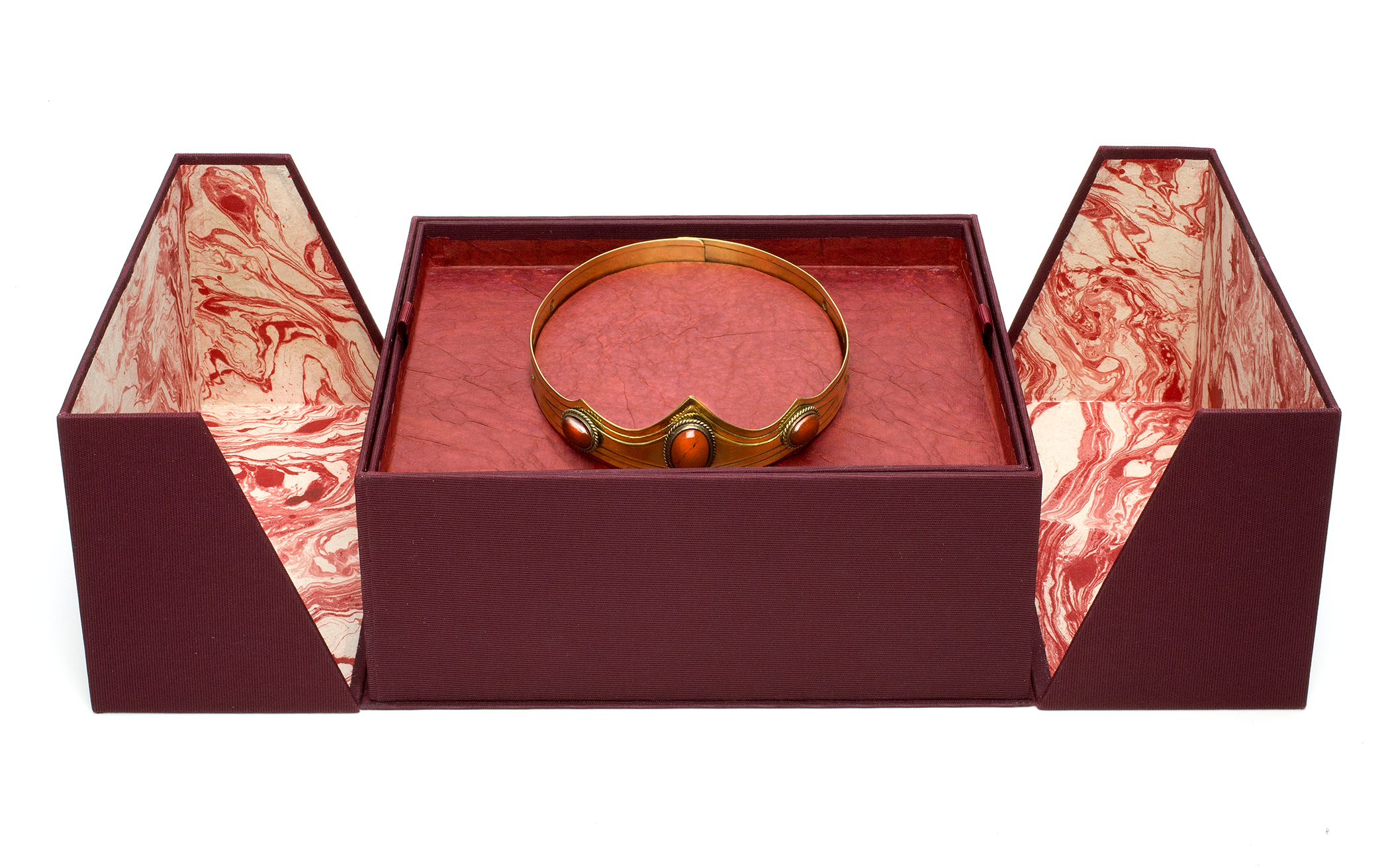 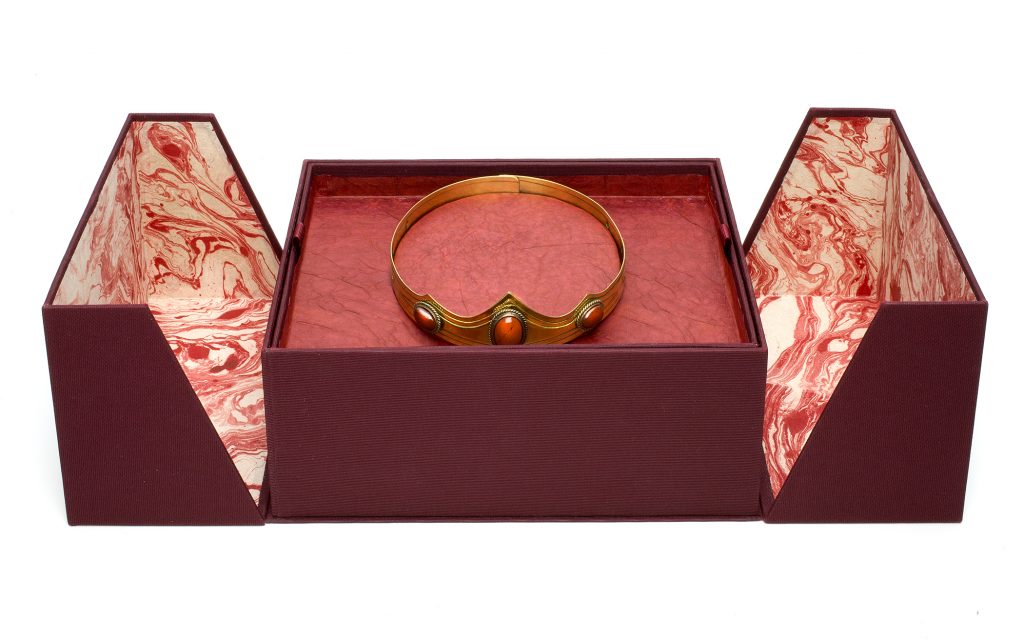 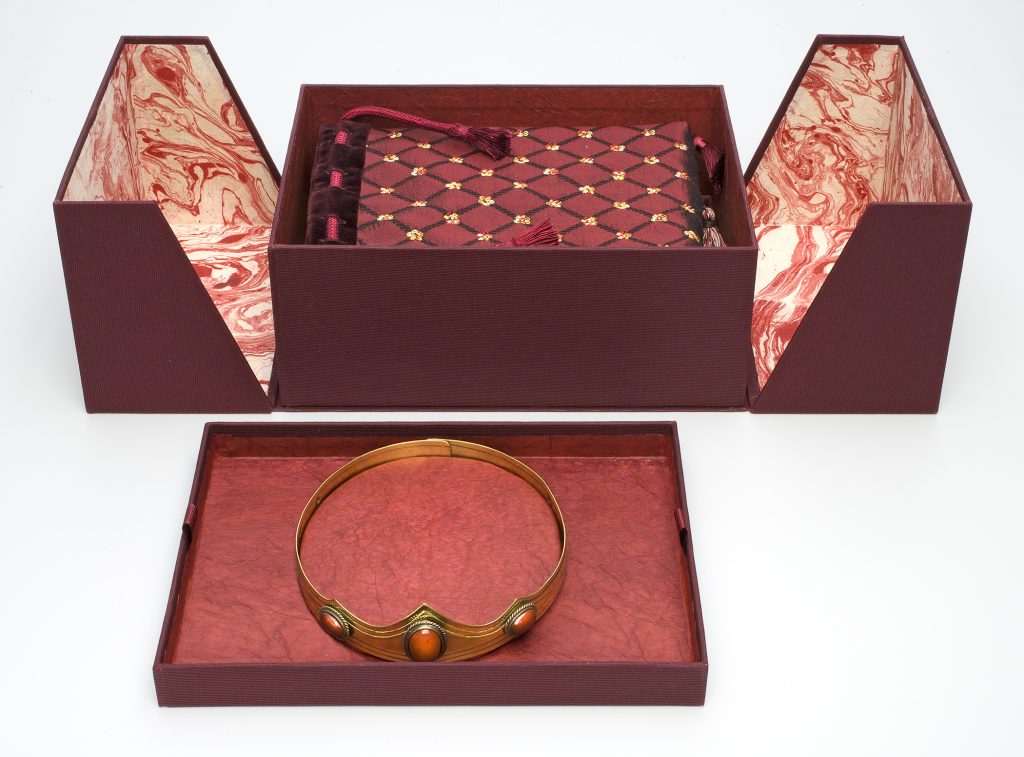 Underneath the tray holding the crown is a silk medieval pouch holding the 84-page letterpress book. 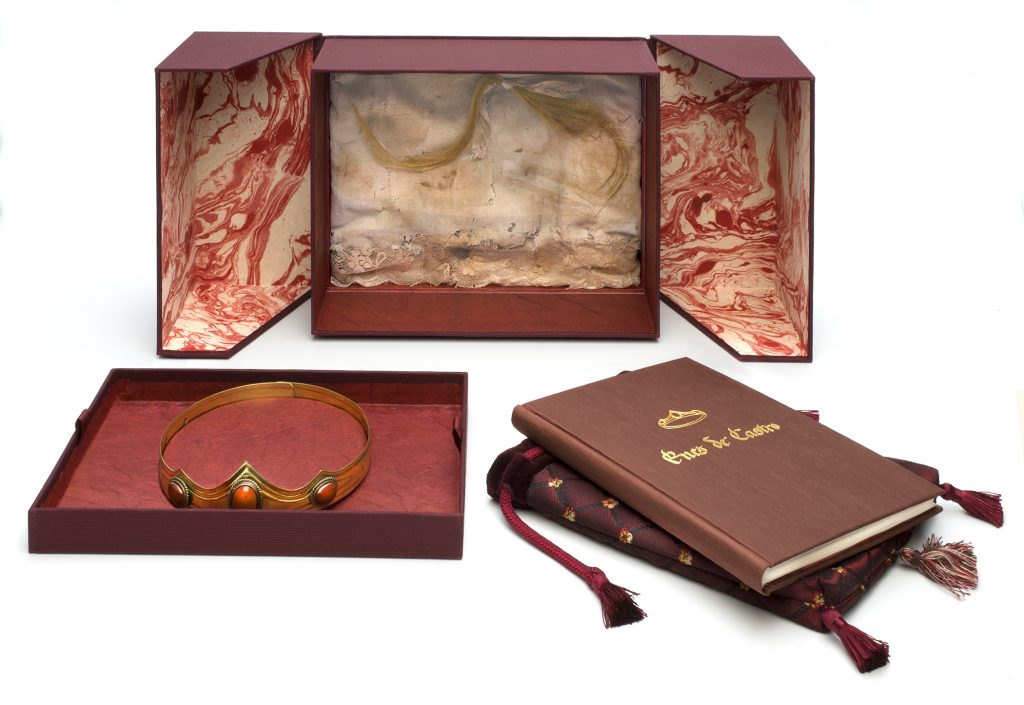 Underneath the medieval pouch is a sealed compartment enclosing the reliquary veil which covered Enes’s body – exhumed two years after her murder – when crowned Queen, and a lock of her hair. 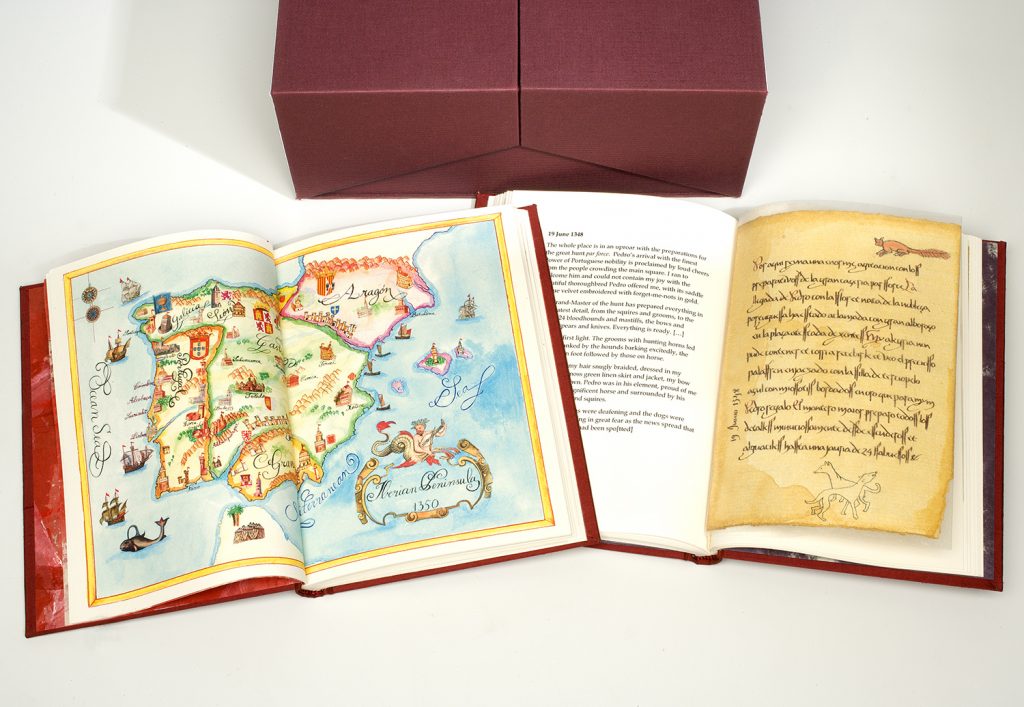 Closed Cuenca box with two books open showing (1) my handmade map of the Iberian Peninsula in 1350, and (2) one of the 11 diary pages handwritten in script Gothic calligraphy, in the Galician, Portuguese and Castilian of the time, wrapped in Tengucho paper.  My translation is on the preceding page.

Enes de Castro, Passion Duplicity Death
2017
Enes de Castro, Passion Duplicity Death is letterpress printed on Arjowiggins 100% cotton paper, hand sewn, with soie sauvage covers, gold engraved title and individually painted Lotka end papers.  The 84-page book includes my handmade map of the Iberian Peninsula in 1350 and the 11 diary pages I “found”, hand written in script Gothic calligraphy in the Galician, Portuguese and Castilian of that time and illustrated on aged Capellades paper, made according to paper available in Portugal in the 14th Century. The original diary pages are enveloped in 5 gr Tengucho paper. Enes de Castro is presented in a box inspired by a 19th Century chocolate-maker’s case from Cuenca, Spain. The box contains three levels – a sealed transparent compartment enclosing (a) the reliquary veil from when Enes’s body was exhumed and she was crowned Queen and a lock of her hair, (b) a silk and velvet medieval pouch holding the book, and (c) a tray bearing her crown. The Cuenca box opens with hinged wings lined with hand painted Lotka paper and covered in book cloth.
edition size of 3
84 pages
25 cm X 36 cm X 2,5 cm
25 cm X 18 cm X 2,5 cm
https://www.youtube.com/watch?v=KnhTX1VKiUM
3:12 – 5:12

Enes de Castro, Passion Duplicity Death is the true story of a remarkable 14th Century woman who lived a grandiose, dangerous and tragic love affair with Prince Pedro, heir to the throne of Portugal. Enes was the lady-in-waiting of the Castilian Princess marrying the Prince, the marriage sealing an important alliance between the feuding Kingdoms of Portugal and Castile. Pedro and Enes’s love affair required years of duplicity and subterfuge, and has been documented by chroniclers and historians and fixed in popular mythology. However, Enes has been portrayed throughout the centuries as the meek and terrified victim of Pedro’s father the King, and the inconvenient lover of his son and heir.

How wrong they all were!

My extraordinary “discovery” of Enes’s heavily damaged diary, and my painstaking research reveal her to be well-educated, an accomplished seductress and an influential protagonist in the complicated dynastic maneuverings between the kingdoms of Portugal and Castile in the wake of the wars against the Moors.  The 11 still legible pages of Enes’s diary – written in a mixture of Galician, Portuguese and Castilian, and dating from January 1340 to November 1354, two months before she was murdered — are surprisingly explicit and personal, baring the torments of Enes’s prohibited love for Pedro, her loyalty to Castile, and how she shaped the destinies of Portugal and Spain.

Before writing Enes’s story for this letter-press book, I spent more than a year piecing together the story of this myth shrouded woman, researching in medieval libraries, monasteries and universities of the Iberian Peninsula, visiting the castles where Enes grew up and was exiled to, the manor houses where she hid and spied for Castile, the fountain where she was brutally murdered. Finally visiting the Monastery of Alcobaça where millions have viewed the magnificent sarcophagi Pedro had commissioned in 1362 for Enes and himself, now protected as UNESCO World Heritage.

I chose the artist book medium to make real this 700-year-old story. Every detail was meticulously studied and crafted: the paper handmade according to the way paper was first produced in Xátiva, Al-Andalus, and introduced in Europe in 1150, the Iberian Gothic script calligraphy, the authentic illustrations, the medieval pouch holding her diary, the stained and tattered veil Enes was covered with when her body was exhumed two years after burial and she was crowned Queen of Portugal by Pedro when he became King, the lock of her hair tied in a threadbare ribbon, her replicated crown.

Even the ancient past is immediate, when revealed through passion. The artist book Enes de Castro, Passion Duplicity Death gives the reader an intellectual, emotional and tactile experience of the beauty and tragedy of this true medieval love story.