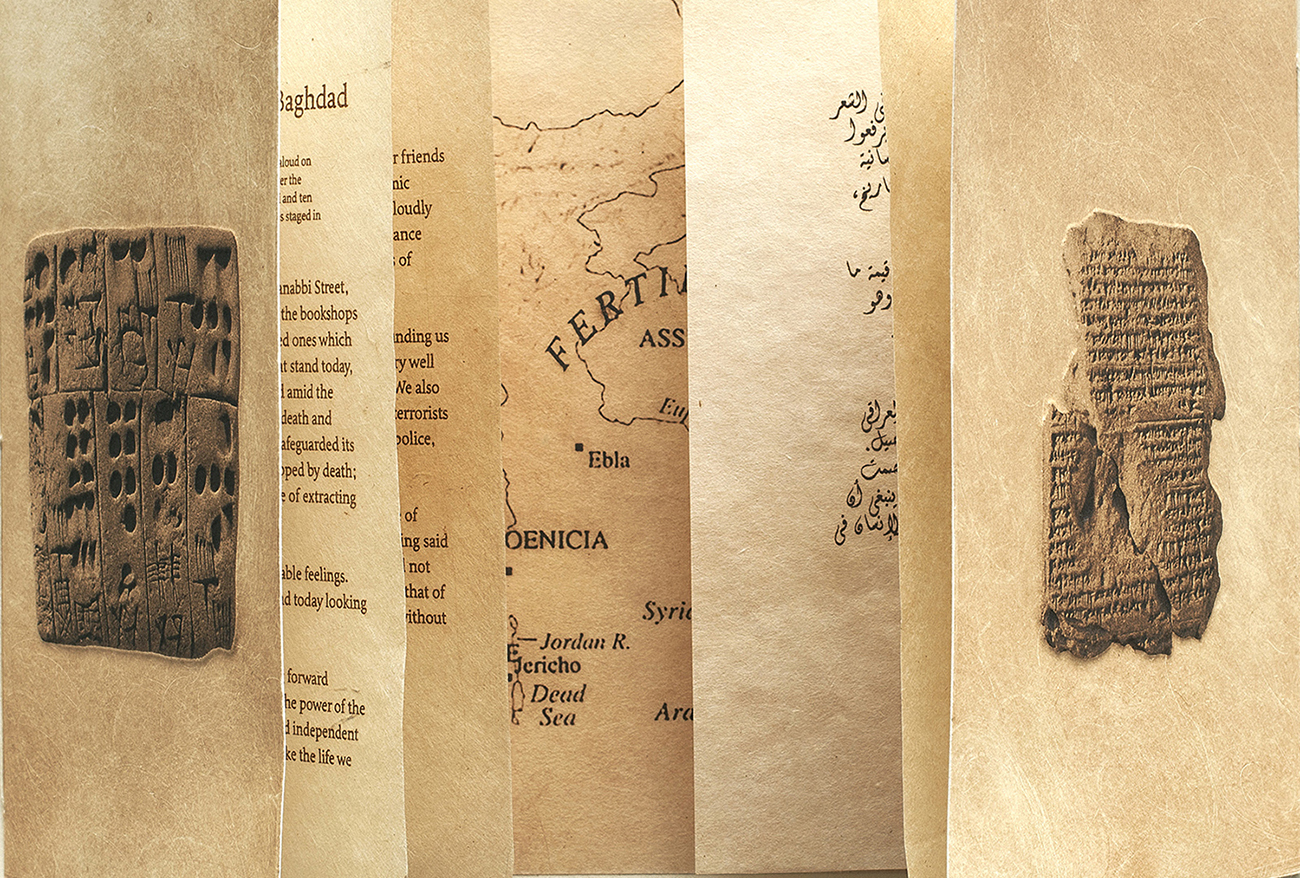 Cover pages are hand-inked intaglio etchings of cuneiforms dating from the 5th century BCE from Babylonia. John Sullivan of Logos Graphics made etching plates from photographs of original cuneiforms housed in The British Museum. The first set of interior pages consist of relief prints of cuneiforms featured on the cover of the book. The next set of interior pages is comprised of intaglio etchings of the English and Arabic translation of The Manifesto of The Poets of Baghdad. Cathy DeForest printed those translations as intaglio etchings from solar plates by which she made. The final page of Our Immortal Soul is an intaglio etching of a map of ancient Mesopotamia also made from solar plates. Images and text are printed on Hahnemühle German Etching Paper. Paper clay was molded into a customized stamp of the Babylonian dream journal cuneiform in order to make the miniature cuneiform on the front of the portfolio box. The cuneiform was then painted with acrylic paints to resemble the artifact. Sabina Nies made the clamshell portfolio box housing Our Immortal Soul.

Within 24 hours of the bombing of Al-Mutanabbi Street in Baghdad in 2007, ten poets and several actors staged performances. At great risk, they gathered to celebrate the long history of the street as welcoming and housing the art forms, written and pictorial, that have graced the rich history of the region. As a sister artist, the minute I heard of their courageous acts, I wanted a way to stand with them by creating a piece that would honor them and their culture.

These poets stood in the debris of the bombing, but they also stood on the shoulders of our common ancestors, those who formed the first letters in clay cuneiforms, five thousand years ago. I have long been fascinated with the crucial developments of ancient Mesopotamia and its achievements: the invention of writing, the creation of sophisticated art and literature, scientific discoveries that still influence life today. As poet, Abdul-Zehra Zeki said in his 2007 Manifesto of the Poets of Baghdad, ancient Mesopotamia “was the center of civilization,” and Baghdad was “one of the largest cities of enlightenment in history.”

When I discovered that the cuneiform on the right was a dream journal from Babylonia (circa 5th centruy BCE), I felt that it embodied the dreams of the Al-Mutanabbi poets in the 21st century. I wanted each viewer to have a visceral experience with the beauty of humankind’s first writing. Today we see maps of Iraq and connote it with terrorism and great suffering. I chose to replace those images with the map of the Fertile Crescent, one of the greatest sources of our common cultural heritage.

This book I part of the Al-Mutanabbi Street Project, an international response to the car bombing of the ancient book seller street in Baghdad in 2007. The original translator of the Arabic Manifesto into English was Inan Jab. Hassan Anwar assisted me in the Arabic translation of the excerpts I chose to highlight from the Manifesto.

I realize how privileged I am to create this piece. I am deeply aware there are many who are not free to create or even read books. I dedicate this piece to all who, like the Baghdad poets who proclaimed their Manifesto, risk their lives daily to protect artifacts and sacred books in Iraq, Syria, Palestine, Iran, Egypt, Afghanistan and beyond.