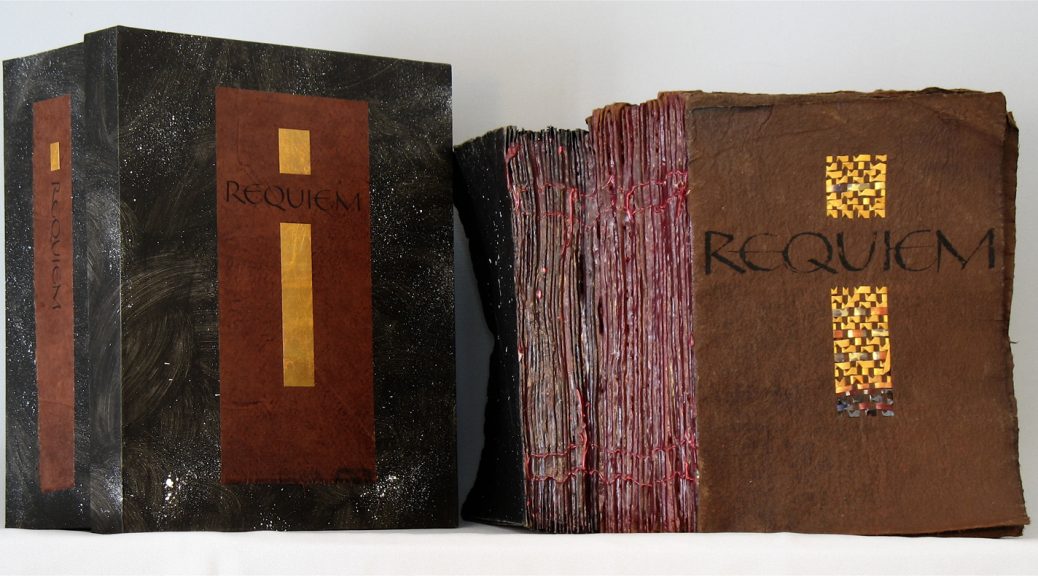 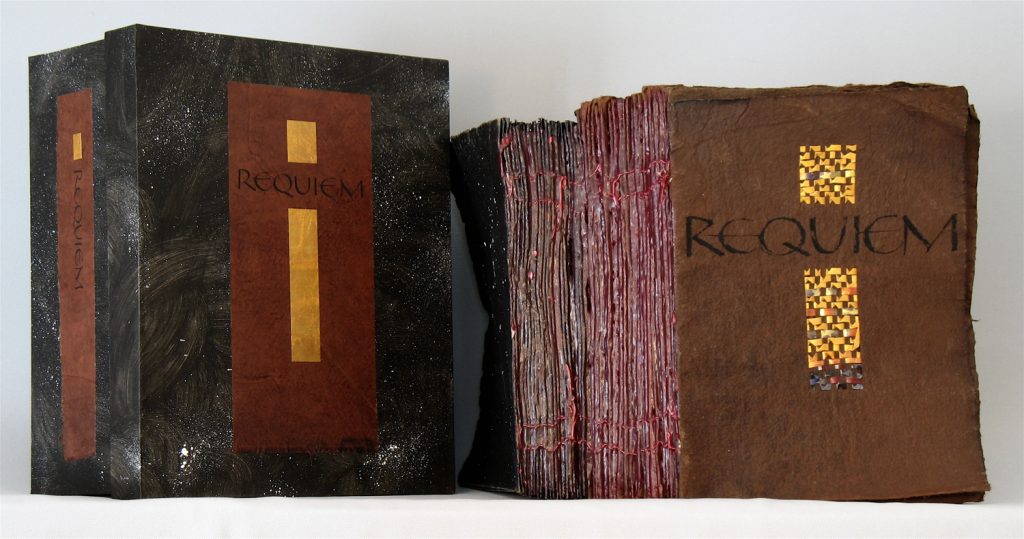 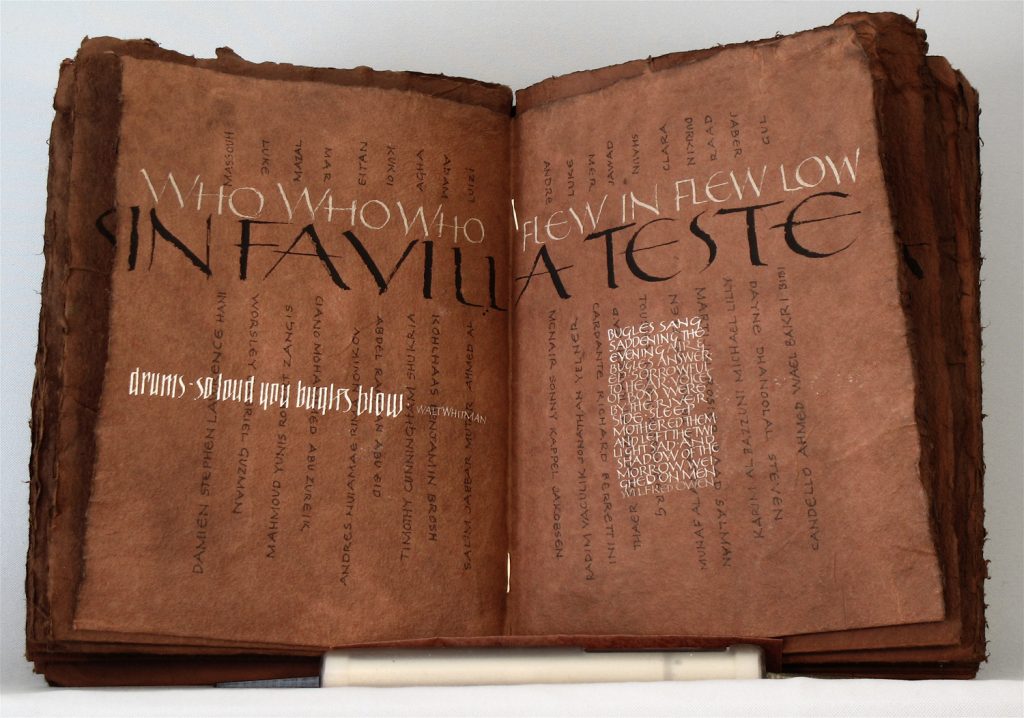 Inside page with names, Mass and poems. 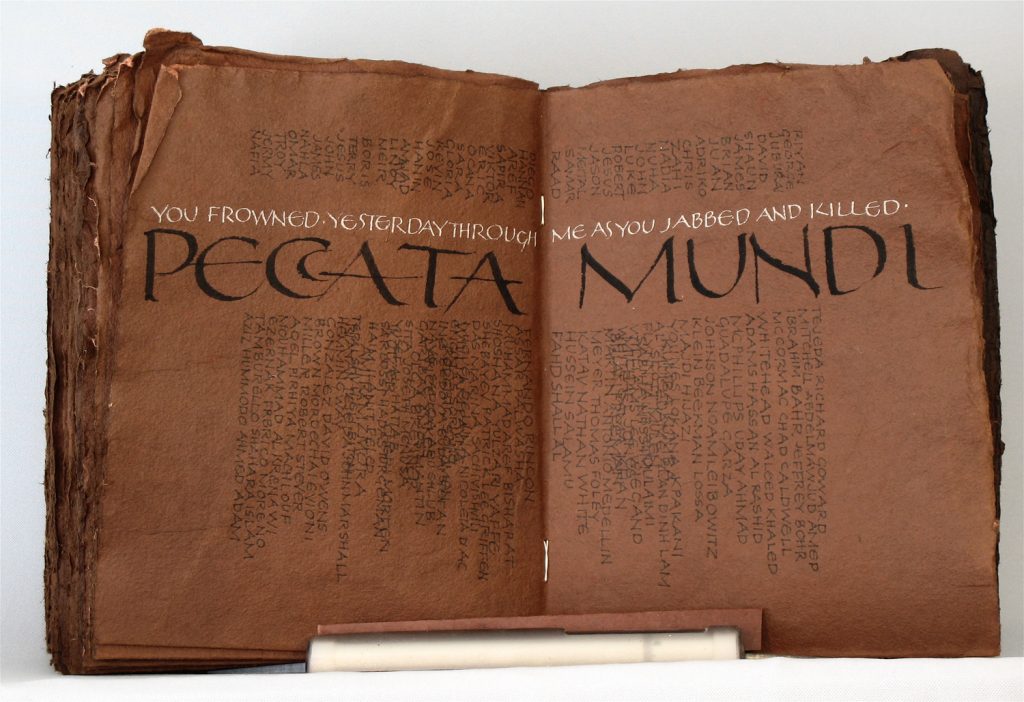 Inside page of names and Mass. 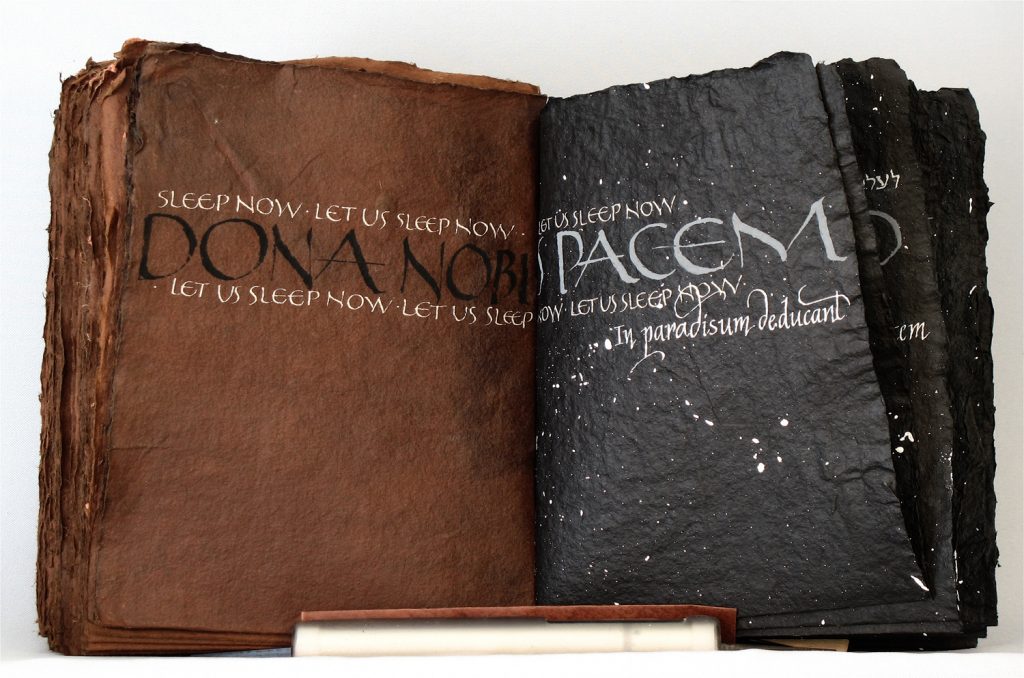 Inside page of brown and black paper with Mass, Wilfred Owen poem.

Requiem began as a gift. Several years ago I met papermaker Amanda Degener, and she gave me a large book made of her Cave Papers saying, “Do something with it.” She had folded and bound the brown and black papers and slathered red padding compound on the back. It was heavy, tactile, rough and beautiful in itself and it took time to know what to do. It had heft and needed big words.

I had never thought of using war as a subject until the Bangor Symphony where I played string bass, performed Benjamin Britten’s “War Requiem.” The piece is war transformed by art – words that combine the tradition of the requiem mass with the poetry of Wilfred Owen. It is harsh music combined with exquisite beauty – the best and the worst that we can be. In the final Libera Me, the tenor and bass sing Wilfred Owen’s poem, “Strange Friend;” about two soldiers who have killed each other and ends with their voices intertwining, “Let us sleep now, let us sleep now.” Then the chorus and soprano soar, “Into paradise may the angels lead thee,” as we honor and remember those we have asked to fight. It is visually and musically heart breaking.

Words from the requiem mass began this book and then it sat awhile – waiting. It waited until I met poet, Lee Sharkey and collaborated on several pieces using her war poems. She is a member of Women in Black and joins others reading names of military and civilian dead. For centuries, calligraphers have written memorial books and the names became my connection to her poetry. I began writing names vertically in this book, like the warp of war, mixing recent names from different countries and conflicts. With each one, I wanted to remember the sorrow of family and of my community for a young man who died as a fighter pilot. Interspersed are words by Tolstoy, Remarque, Whitman, Jeffers and more – Wilfred Owen’s poems are some of the most powerful as he speaks of the close bond between soldiers and also the fear, suffering and death – “the pity of war.”

Writing the book was a challenge; the rough pages and folds excluded guidelines and each sheet had different texture and absorbency. It was like working with something, not on it. The brown pages feel earthy; the black are rough but crisp. It has felt like a collaboration of poetry, names, cautioning words we forget, earth and sky, war and beauty – paper, pen and ink.