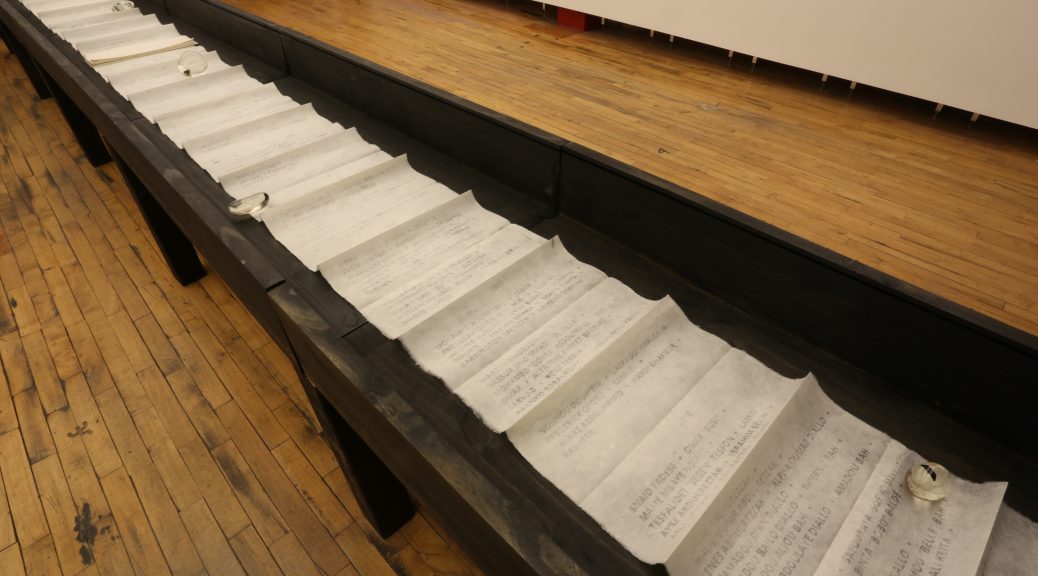 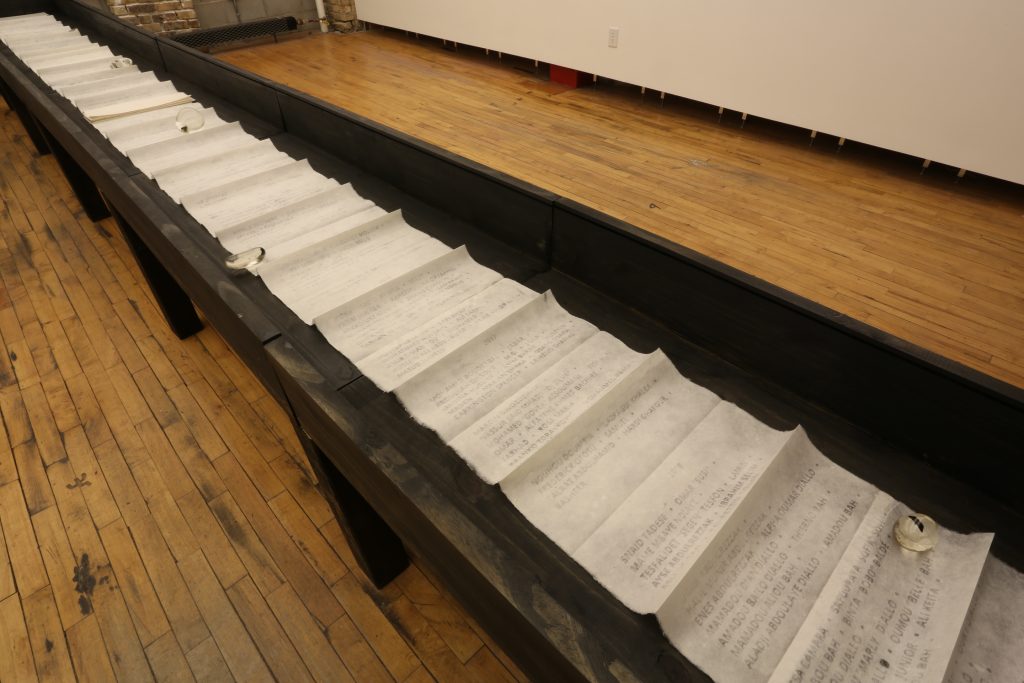 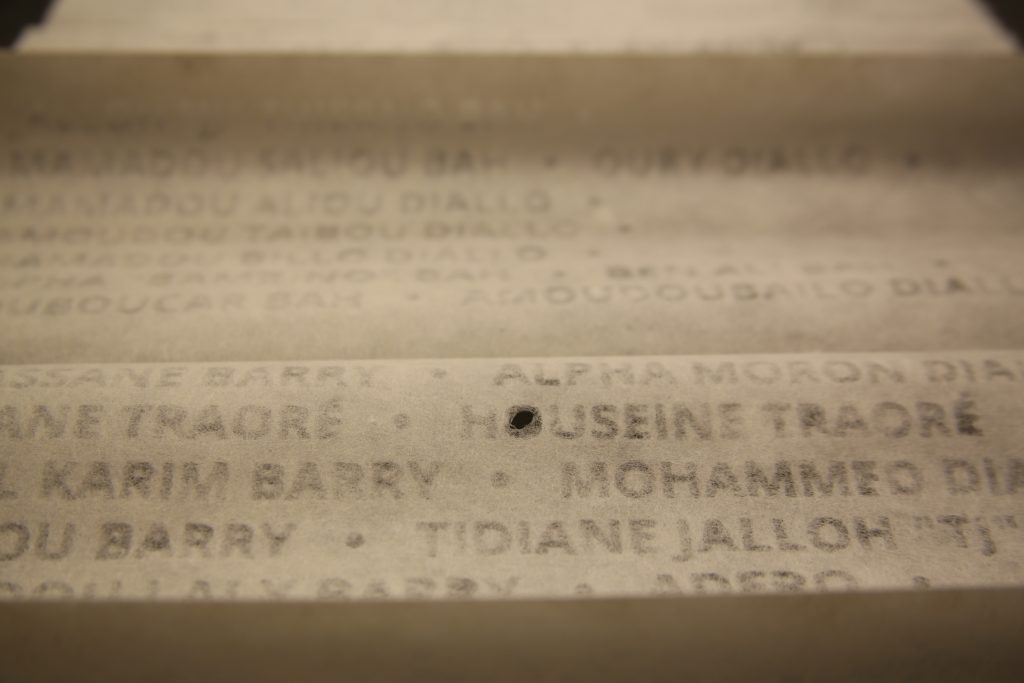 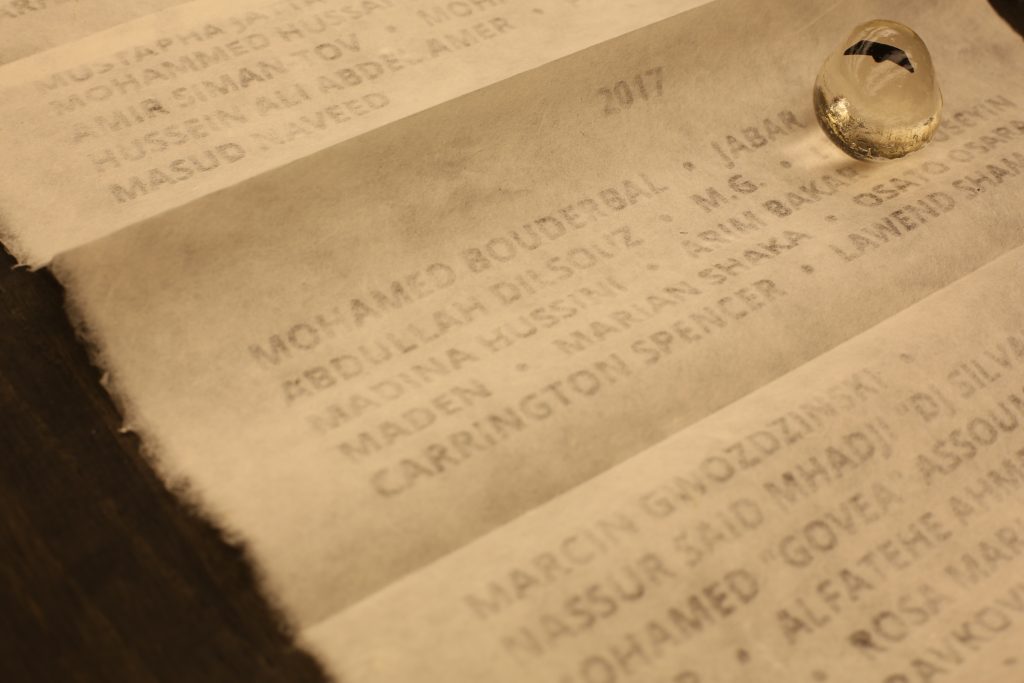 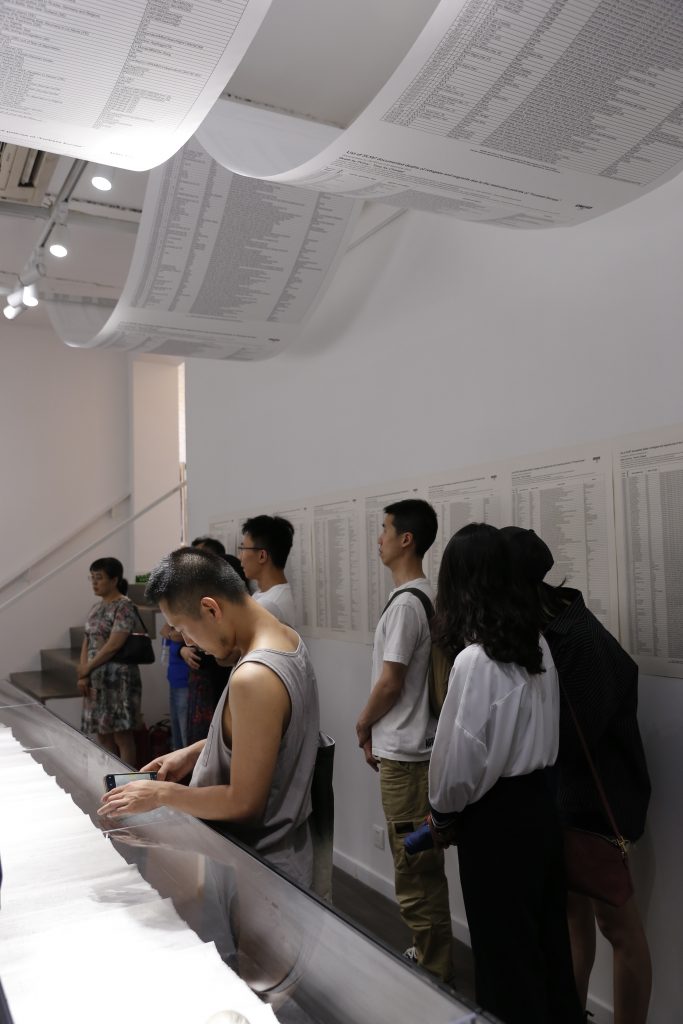 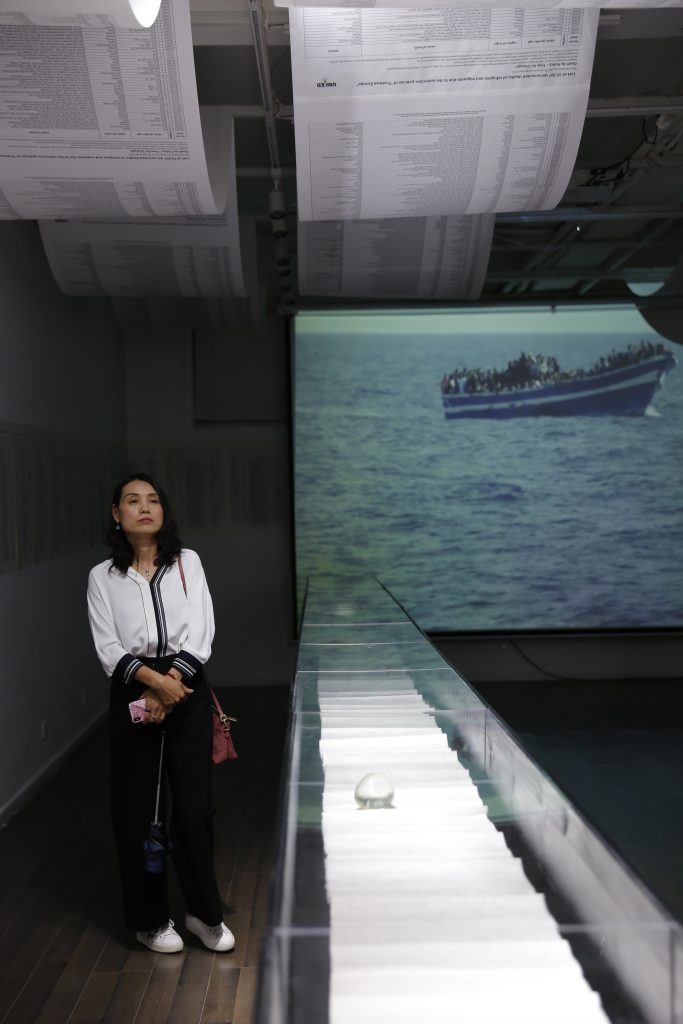 One’s name is given by one’s parents. One’s name humanizes one’s identity. When deaths without names become the numbers in a news you hear, the respect to the dignity of lives is absent.

In the past year, we have been working with Dutch NGO U​NITED for Intercultural Action​ (U​NITED)​* to create this piece based on the list they created and published by Guardian UK in June 2018, which records the deaths of migrants who attempted to enter EU from Africa, Middle east, and many other regions since 1993. The list indicates that eighty percent of deaths were caused by drowning in the sea during the deadly migration, which informs the creation of the installation.

“Bodies lie undocumented at the bottom of the Mediterranean; no one knows how many migrants have disappeared in the Sahara, which may even be as deadly as the sea for those who cross it.” – by Niamh McIntyre and Mark Rice-Oxley, Guardian UK

We gathered names from the U​NITED list and formed a memorial of names with the negative space of fragile handmade paper. In this technique, called watermark, you read what is not there. Similar to the watermark, the lives lost form a mark on humanity. If humanity is a one whole piece of paper, every letter of every name makes a hole on it.

The pages are displayed in the shape of water waves. On the pages there are clear resin-castings of the pebbles collected on the shore of Mediterranean Sea, which were mailed to us by those residing close to the Sea and the migrant crisis.

When Geert ​Ates,​ the director of ​UNITED,​ visited us in Minneapolis in July to discuss the project, he pointed out that the deaths documented in the list of names are only a small portion of the total deaths.

The pages of this book are in continuous production, as more and more names are added to the UNITED​ list. The back cover of this book will remain detached until we as global citizens are able to use our collective will and actions to end this humanity crisis. ​We hope this continuously-expanding memorial urges​ us to look at the extremely hard human condition beyond the numbers and calculations, the left and right, we and others.

As we all have names, and ​all names are sacred.

* UNITED​ for Intercultural Action
UNITED​ is the pan-European network against nationalism, racism, fascism and in support of migrants and refugees, supported by more than 550 organizations from 48 European countries.

Peng Wu is a design activist and an interdisciplinary artist dedicated to creating socially engaged art in public space. His work combines the power of design thinking with contemporary art strategies to address various urgent social issues including immigration, modern medicine and health, environmental sustainability. Through collaborating across disciplines and cultures, he has created participatory art installations exhibited in art institutions such as Weisman Art Museum, Walker Art Center, Minneapolis Institute of Art, as well as numerous public spaces and community centers.

Through Jammo Xu‘s artworks, she combines the concept of contemporary art and interdisciplinary techniques, through subtle details, to express her art perception. Jammo’s early artworks focused more on her personal growth experience, culture collision, and protection of animal habitats. One of her comic books, International Club, was collected by the Minneapolis College of Art and Design Library and played an active role in promoting its international cultural integration. She was also invited by the University of Central Arkansas to give a lecture on visual storytelling. Currently, Jammo sets her sights on social development, particularly the retrogression of women’s rights in third world countries and preserving intangible cultural heritage with new perspectives. Her latest pursuit and exploration is to merge Shu embroidery into traditional oil painting and installation art. Jammo’s artwork was exhibited in China, Britain, and America.