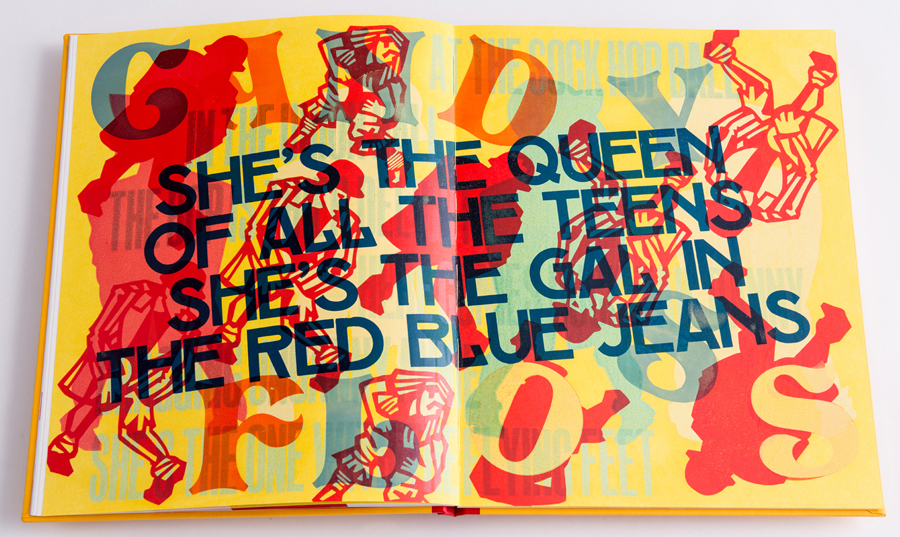 Page of Screen-print and Woodblock Type

The contorted figure in the black leather suit with one leg forward, knee bent, and the other, held rigid in a steel brace and thrust awkwardly out behind him. The stance was unnatural, you could maybe call it unholy. His body seemed twisted, almost tortured. At peaks in the act his whole frame would vibrate as he clutched the microphone stand with his gloved hands, desperately, as though it was all that prevented him from being born away by the rage and passion of the moment.

Gene Vincent was the original and legendary black-leather bad boy of rock’n’roll. His records were banned and censored, his live shows incited riots, his private life was a combat zone of booze, pills, guns, and women, and he ultimately died for the blue jean bop.

THE BALLAD OF THE BLUE JEAN BOP

Drawn from the mist of nostalgia, a slice of early Rock & Roll history that possibly existed only in the playground section of a young, impressionable mind.

Early impressions of Brighton Pier; the abduction by a desperate woman with a beehive haircut, the street corner, the police station. Milkshakes, Candyfloss and the R.Wights secret lemonade drinker.

The relentless bubble-gum smell of fairground arcadia next to the raw energy of unrequited adolescent sexual fantasy. A youthful vision of immortality all focused in Punch and Judy technicolor.

Victorian memorabilia, holiday resort picture postcards, and then the Peabody Estate… and the sin of Auntie Dot’s daughter and bastard baby; a shadow lived next door.

Yeah, there’s a smoke cloud rising, Mama…
All to a four four rhythm and a slap back beat!