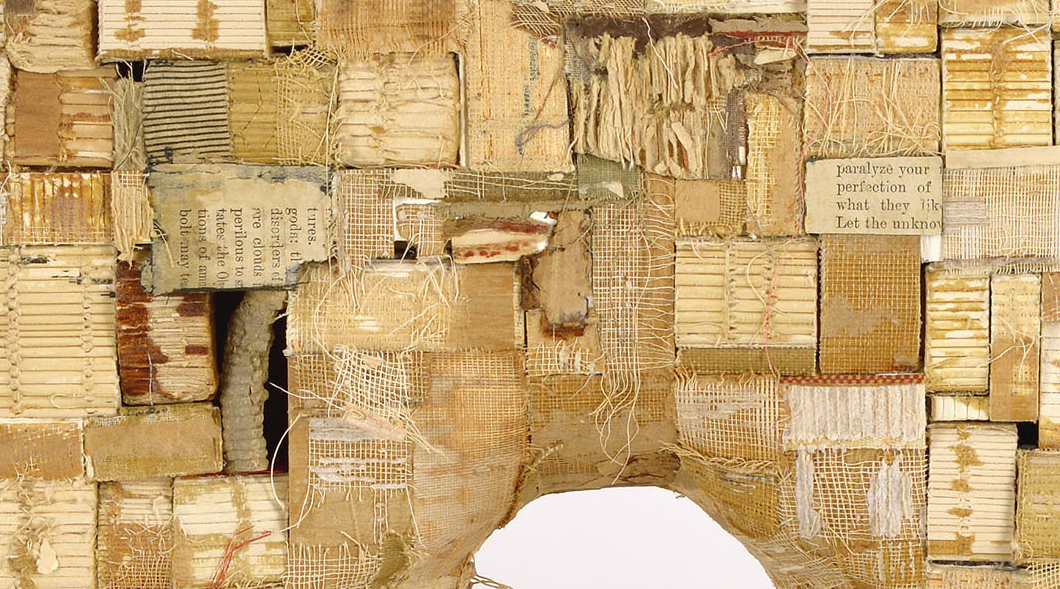 When I acquire a book, it becomes art material. I hope to give unwanted books a new home in the world. I call my bookwork “altered books.” I guess I want to preserve the word “book” as much as I want to preserve the object. I glue the pages shut to seal their story, then create my own story. The book is an object — intimate and public at the same time. So it is with an artwork — a link between self and other. The artist’s job is to make new story out of old story. “What is the use of a book,” thought Alice, “without pictures or conversations?”

Sometimes I find old books whose titles appeal to me, that trigger some response that might lead to a juxtaposition of ideas. Other times I collect worn books whose covers are different shades of a color, such as red. Distressed books can be resurrected and reimagined as building blocks to create new structure. I find my books at used bookstores, and they find me as hand-me-downs from friends and family.

Though I see great fragmentation in the world today, I also see interdependence and the need to become one. Cross-pollination has always been a major factor in the arts. Literature, music, and architecture have seeded my artwork, sometimes blossoming into fruition, always leaving a trace of growth.

Altered books can be seen as poem-objects. A form has been changed, a patina is present, an idea is on the morrow. I just happened to be around to catch the imagery and then release it as a bird into the wind.

Persephone’s Grotto exposes the hidden majesty of the bookbinder’s art. The stitched spines open new vistas for our aged visual fields. An unfamiliar architecture arises: a fresh shape, an indigenous mass, a weathered patina. There is a certain stark beauty in remnants of adhesive, of each book’s binding agreement and promise that will never be broken.

Beginning with the sheer splendor of a cast iron pulley chamber, I built a wooden armature with an opening to which I could fasten book shards and sea lily stem fossils. As collector, I find objects that want to be together, to be companions in a new life. In my role as joiner, I deal with surface and form, sequence and juxtaposition. I try to turn chaos into order by whatever means possible, sometimes by accident.

Our black cat Persephone was my constant companion in the creative process. Persephone is the Greek goddess of both the underworld and spring growth. A grotto is a small picturesque natural or artificial cave often used for devotion. So Persephone’s Grotto can be seen a place where dying books have been transformed and venerated as new life.

Through age objects acquire a maturity of surface. Like humans they have seasons. Assemble them in an artwork, and they are reborn. Once lost / now found.