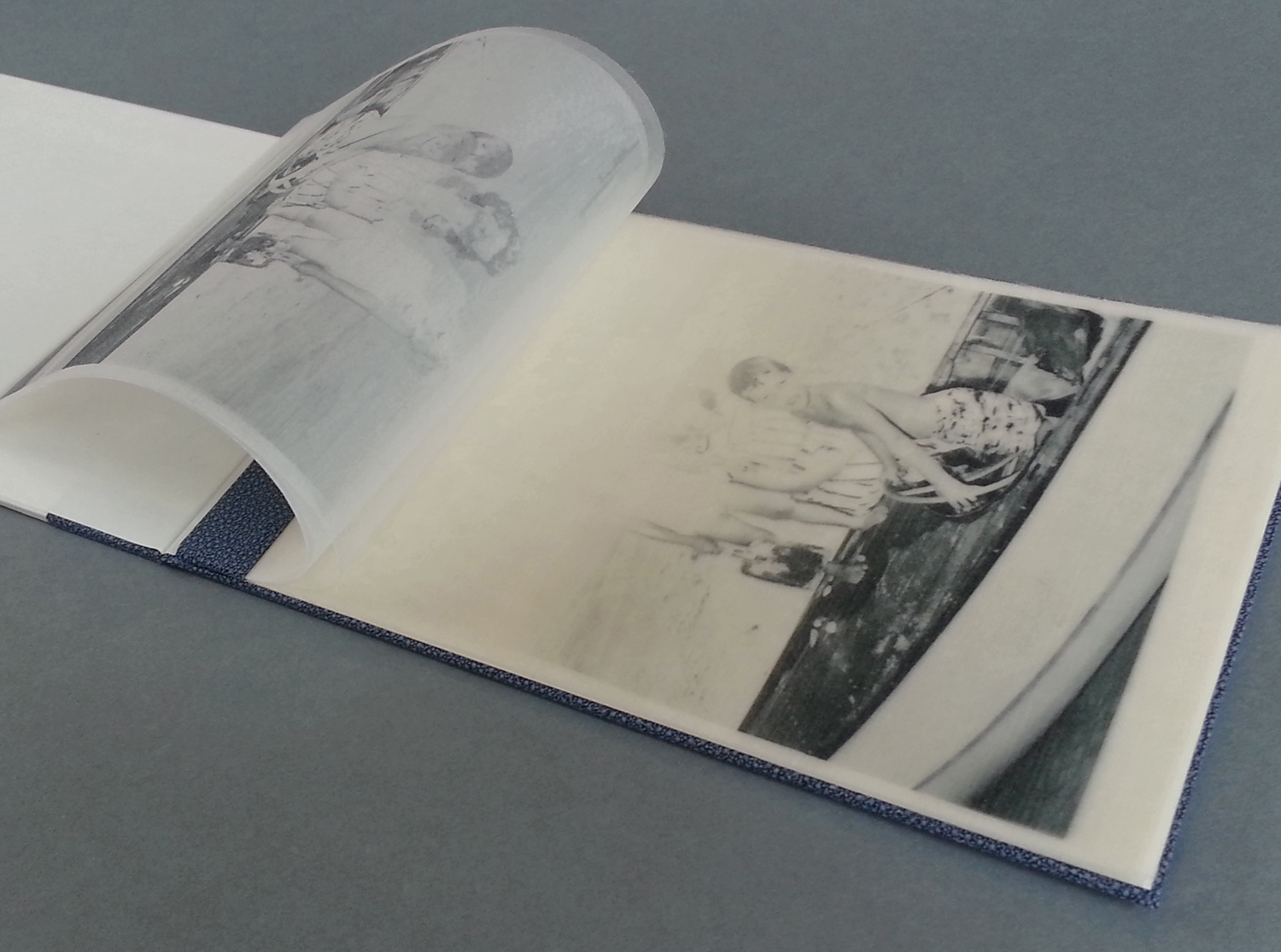 Front cover: the book is covered in silk and embossed Skivertex. A black and white photograph of a beach house is printed onto the silk.

The cover lifts up, opening with a top hinge. Single leaf pages are bound at the top. The text “it was telling time that had become so difficult” printed on vellum makes reference to what is commonly thought of as one of the first symptoms of Alzheimer’s disease, the inability to read time on an analog clock. A black and white photograph of three figures in a boat on the beach, which is printed on the silk organza pages beneath, is visible through the vellum and is viewed together with the text.

As the pages of silk organza are lifted, the image begins to fade from the top down. The special memory of a day at the beach is slowly slipping away.

The identities of the figures is now completely gone. Only a fragment of the memory remains.

On the last page of the book the text reads “and then there were the other things” suggesting the progression of Alzheimer’s disease.

In her artist books, Erin K. Schmidt explores the relationship between memory and identity. Her work is heavily influenced by the notion that identity is informed by memories and perceptions of passing moments in our lives. Personal photographs and writing play a key role in her work, and are often used in repetition in order to dwell on a particular event in the private swell of emotions that rises in the course of recall and reflection.

But, what happens to identity when our defining memories perish? In her book Telling Time, Erin K. Schmidt focuses on her family history of Alzheimer’s disease. The loss of memory is evidenced as the repeated single image, a childhood photograph of the artist’s mother, the artist’s uncle, and their mother who had suffered from the disease for many years, slowly vanishes to white. The three are sitting in a boat on the beach at their summer home where the artist’s mother and her family spent summers while she was growing up. With the turn of each page, this special memory printed on sheer silk organza begins to fade from top to bottom. As it does so, the faces disappear first, one after another, taking with them the identities of the three figures.

The cover image, printed on silk, is a picture of the summer home as viewed from the beach where the family photograph on the pages was taken. As the beach image fades, the context of the cover image is also lost. There is no longer a connection to the memory on the beach. It is just another house.

The title of the book was chosen as a way to describe how Alzheimer’s disease effects the ways we perceive time. In addition to the way in which the loss of memory can alter remembered timelines, one of the first symptoms of Alzheimer’s disease is the inability to read time on an analog clock. The simply stated interior text references the early onset of the disease and a difficulty with telling time. The edition of twelve corresponds to the numbers on the face of a clock.