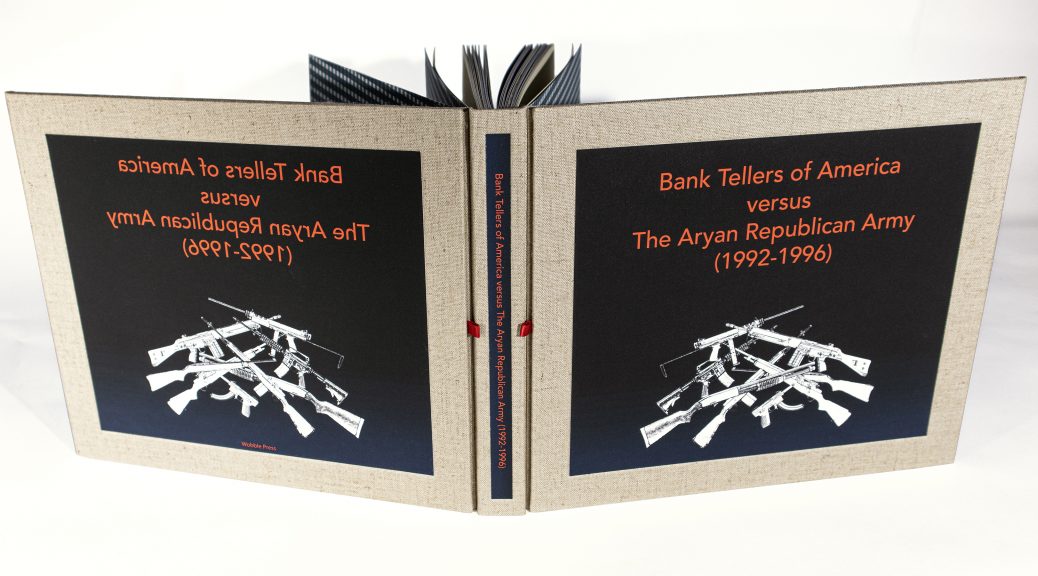 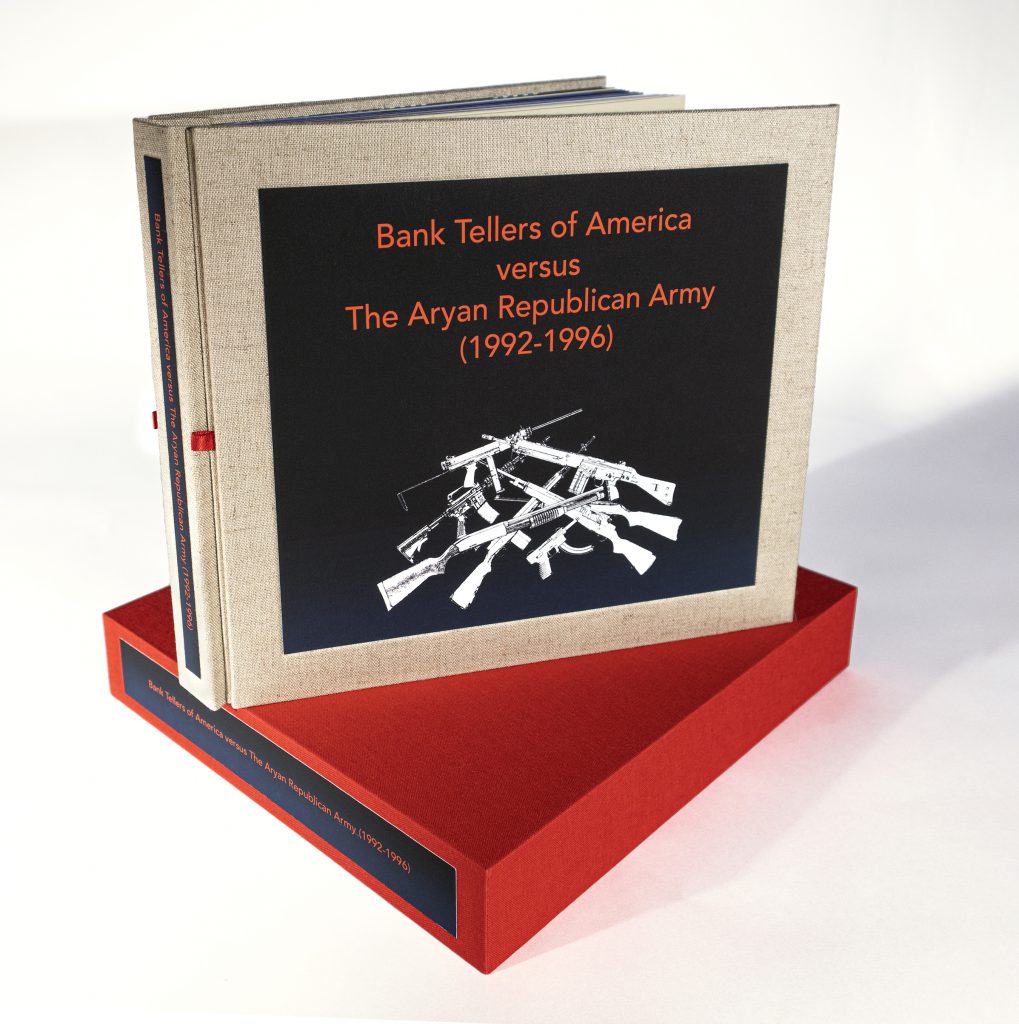 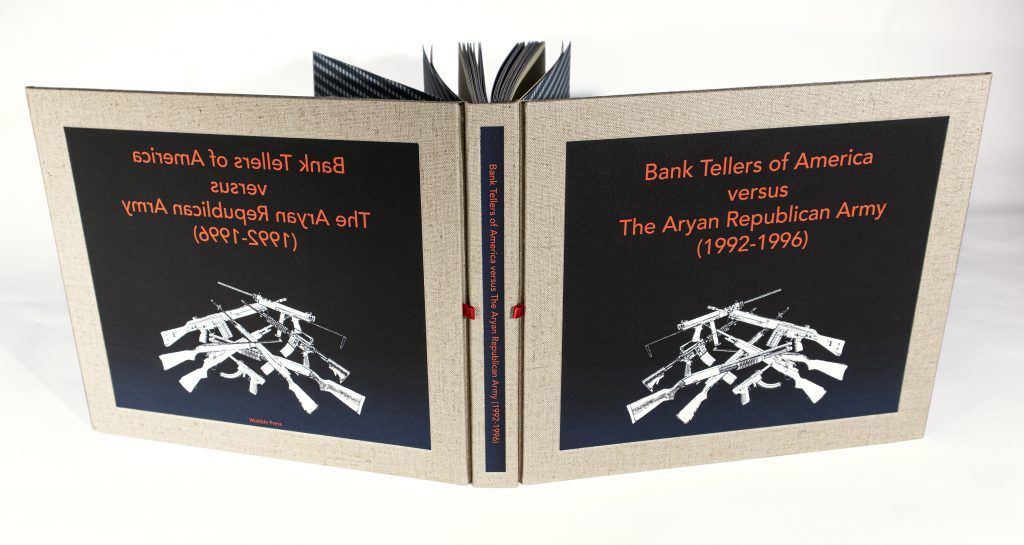 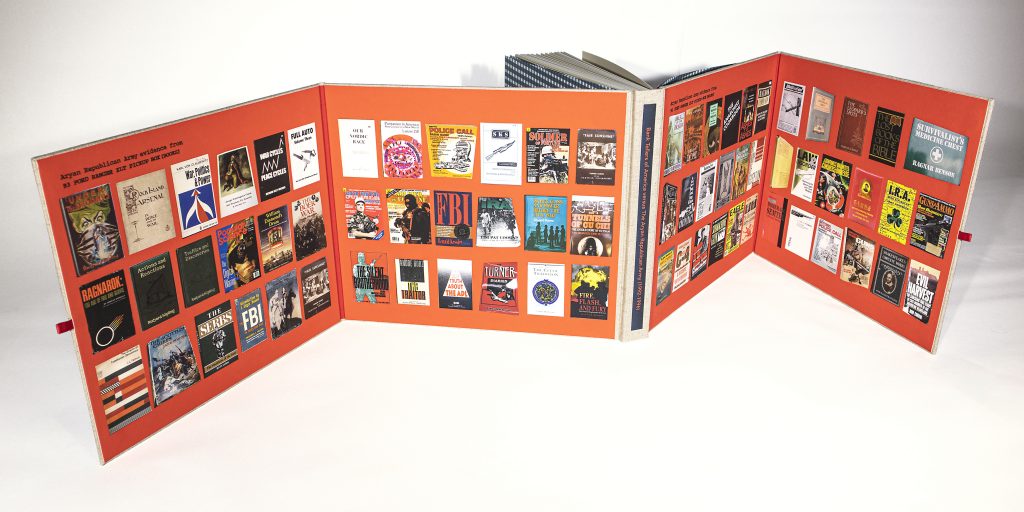 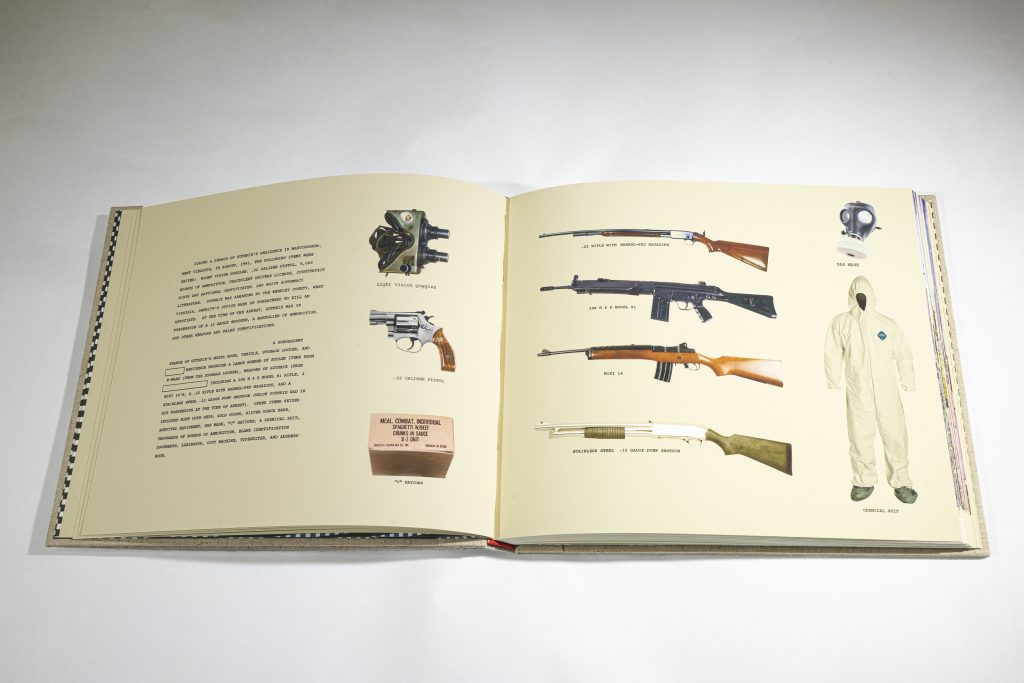 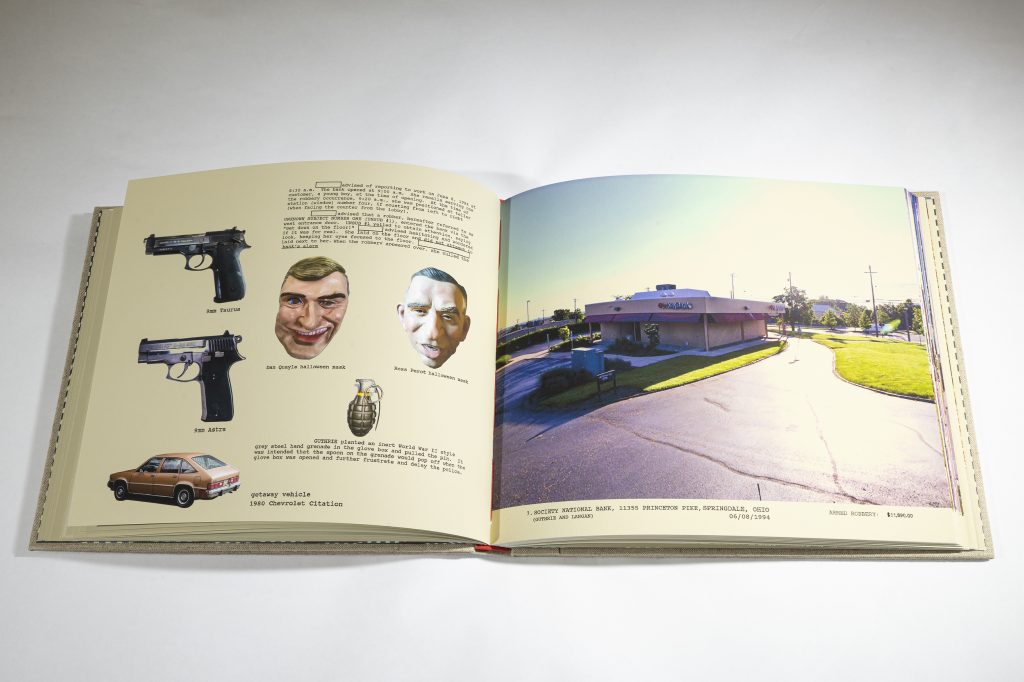 Combining research and direct observation, Tyler Starr’s publications from Wobble Press visualize political and social conundrums from declassified FBI documents. Poetic associations are coupled with meticulous investigation of material from primary materials to shed light on unresolved civil rights issues, fringe political movements and bureaucratic infrastructure created in response to amorphous problems. Starr engages with the ways printed information is used to map human endeavors, and the forms of his visualizations are influenced by printed ephemera such as tourist brochures that present digestible history of sites with troublesome associations, souvenir postcards, and used car classifieds found at truck stops.

His artist’s book Bank Tellers of America versus The Aryan Republican Army (1992-1996) transforms text from FBI documents into images to visualize connections between white supremacist ideology, access to armaments, and violent intent. The Aryan Republican Army (ARA) committed 22 armed bank robberies in the Midwest from November 11, 1992 to December 19, 1995. The objectives of its leaders were to raise funds for the white supremacist movement and overthrow the U.S. government.

The ARA was part of the broader movement of white supremacist terrorism that weaves its presence through American history to the present. Since 2019, the Department of Homeland Security and FBI began to officially acknowledge that white supremacists are the top domestic terrorist threat. Visualizations of the case against the ARA are accurately based on items accumulated by the FBI as evidence. Bank tellers terrorized by the ARA were instrumental in breaking the case. Ultimately it was the bank tellers who identified the gunmen, and their brave testimonies against them in court resulted in successful convictions and destruction of the organization.

Tyler Starr received a Bachelor of Fine Arts from the University of Connecticut, Storrs, CT, and a Master of Fine Arts from the University of Minnesota, Minneapolis. In 1998, Starr was awarded a Fulbright Scholarship to study at the Academy of Fine Arts, Krakow, Poland. In 2011, he graduated with a PhD in Studio Arts from the Tokyo University of Fine Arts, where he was a recipient of the Japanese Ministry of Education Scholarship. Tyler was a 2011 Grant Wood Fellow at the University of Iowa, a 2013 Christiania Researcher in Residence, a 2014 OMI International Arts Center Resident, and a 2018 Fellowship Artist at the Kala Art Institute in Berkeley, CA. His work has been featured in exhibitions at Yale University’s Haas Arts Library, the Museum of Modern and Contemporary Art of Liège, Belgium, and the Museum of Contemporary Art, Japan. Starr’s artist’s books are in permanent collections such as the Getty Research Institute, the Millard Sheets Library of Otis College of Art and Design, The Fleet Library of the Rhode Island School of Design and the Special Collections of the University of Chicago. He is currently an Associate Professor of Studio Art at Davidson College.