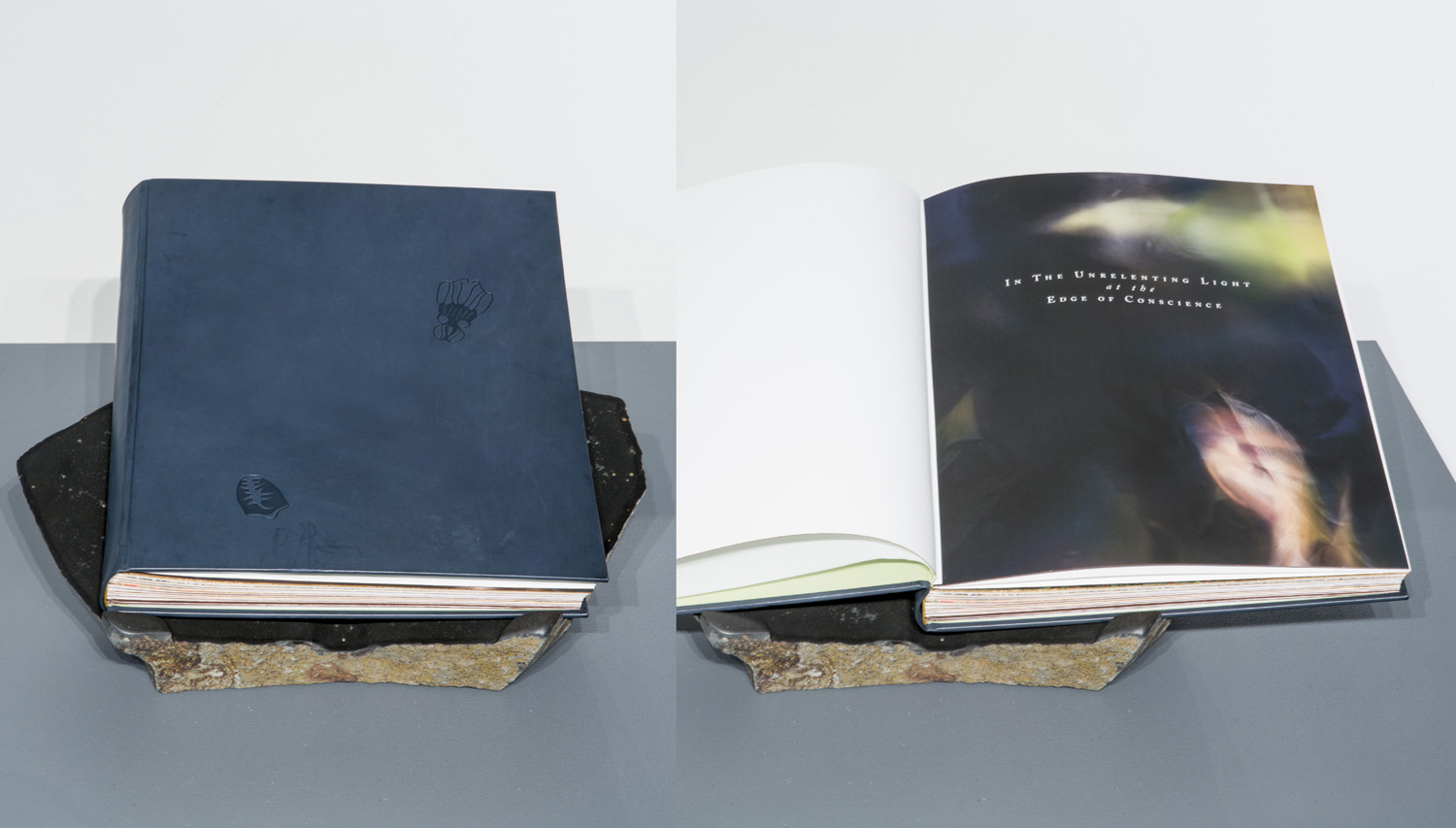 Using methods of series, montage, accrual and pacing to create hybrid and non-traditional narrative structures my artist books re-form the “rules” of traditional literary narrative structures. Images and text fragments referring to a variety of archetypal arenas, including science, image criticism, the fairly tale, are pieced together by the viewer/reader to illuminate the “real” world (as in early work) and a “fabulist” world (as in the work submitted here). The narratives ultimately refer back to the world we are creating through the body politic.

Equal parts science fiction, dream, cultural query, In the Unrelenting Light at the Edge of Conscience is a fabulist graphic novel combining image plates, fragments of poetry, scientific descriptions of time and space, and a unifying narrative of an experimenter and her photographic source material. It poses a fundamental question: what does it mean to be human in a world bent on violence?

Using photographic stills, which the narrator/experimenter calls documented fragments of time, she layers and duplicates vast quantities of images to create a three-dimensional mass of great density. The resultant gravity well forms a visual portal to a disturbing shadow world. Within this world she discovers and names new species. [The conceit of the narrative – this layering of images – parallels my own image construction and process of discovery. Layering black and white images multiple times and applying color, the original disappears and a new form is created. The names of the species are created from Latin roots referring both to existing species and the original photographs.]

The experimenter’s source material, these documented fragments of time, record events associated with some of the main cataclysms of modern-day social and political conflicts. Some of the fragments are iconic, such as the execution of a purported Viet Cong soldier on a sunny Southeast Asian street during the Vietnam War. Others take the familiar and defamiliarize it: SS officers and female staff devouring blueberries in a forest during an hour of relaxation. Still others zero in on the architects of the events, such as the fragment of a smiling former US Secretary of State in conversation with Latin American strongmen at a cocktail party while thousands of citizens have disappeared. Through the excavations of the experimenter, all lead to an almost but not quite unearthly landscape of newly illuminated species.

Traversing the narrative puzzle, the reader/viewer is led through an exploration of time, memory, and the nature of personal responsibility in this, our own fractured world.