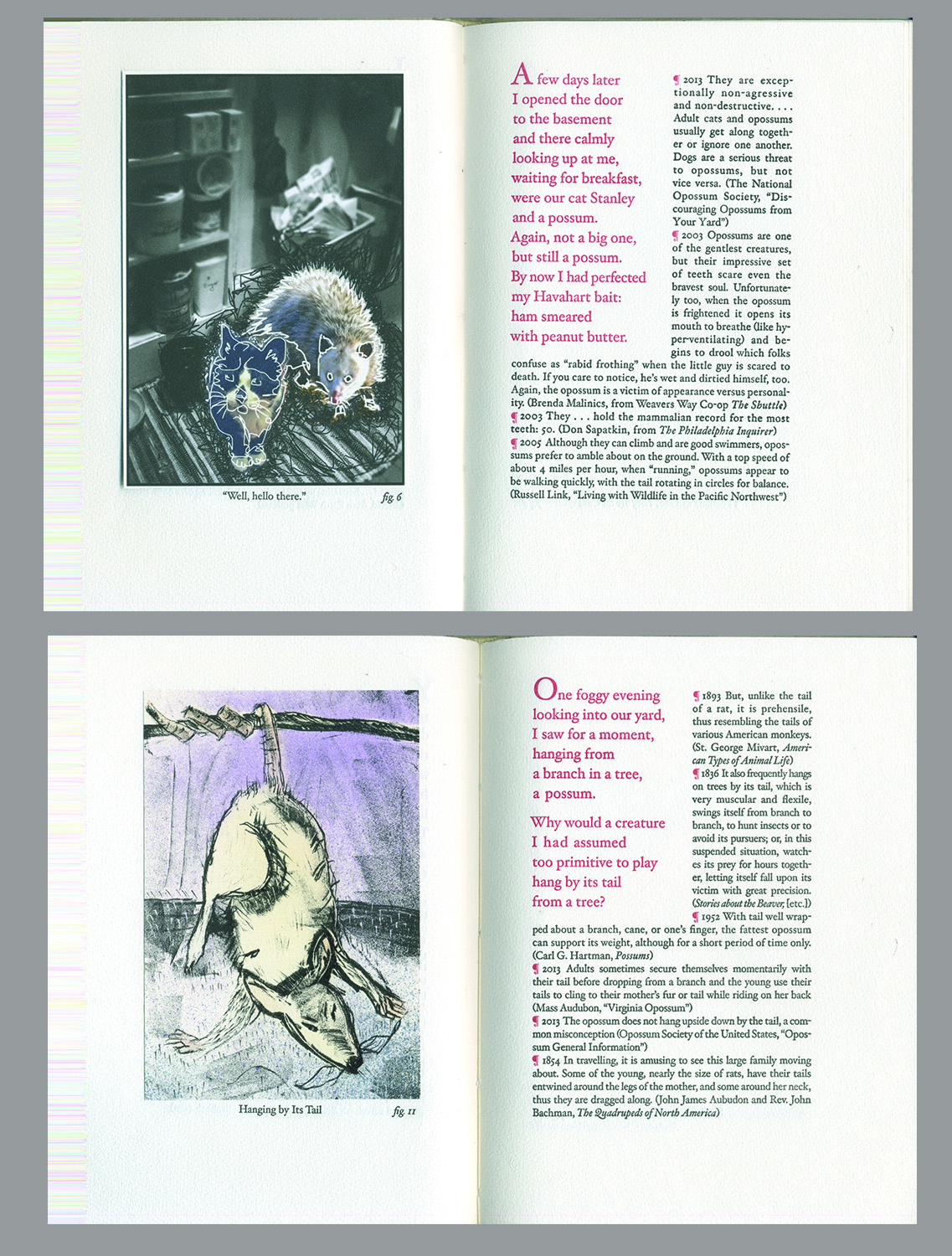 top: pp., 40-41, beginning of the section on the Illustrations, tipped-in inkjet pigment print of an engraving from St. John Mivart’s Types of Animal Life, 1893
bottom, pp. 46-47, beginning of the Works Cited section

I come to the artist book and printmaking through language. For me the first, partial manifestation or embodiment of an idea or narrative forms itself in words. Their inadequacy demands and reveals a shape that is visual, spatial, tactile. The look of the words, the physical qualities of the pages, the images, the color, the structures of the books (and enclosures) are the flesh that gives context and form to the words.

Structure is essential. In some of my books it works metaphorically, but even when it does not, it defines spatial and temporal timing; it orchestrates the relationship of parts.

The artist’s book allows for the play of different voices through the various tools of imagery, typography and placement of text, book design and structure. That particular complexity has become increasingly key to the way I see our world.

The Opossum: A Specimen Book combines writing, scholarship, design, book structure, and printmaking. It is an artist’s book for which the reading of text is at its center.

It is a specimen book in various ways. Most obviously, it is about a particular specimen of animals, the Virginia opossum. In 1831 John D. Godman wrote, “Perhaps nothing can more clearly demonstrate the impatience of the human mind, and the reluctance with which men yield to the hard necessity of carefully observing the operations of nature, than the history of this animal.” As recently as 1968 in a book published by Johns Hopkins University Press one finds: “The statement that opossums copulate through the nose and then, sometime later, the tiny young are blown into the pouch is entirely false.”

The Opossum: A Specimen Book is also conceived in the tradition of the type specimen book.

It is a compendium of voices/observations about the opossum. The primary text, my own story of encounters with the opossum, is surrounded by passages from commentators from the 17th century to the present. I am interested in the fantastical as much as the actual, e.g., the contradictory statements about the opossum hanging by its tail. I am also interested in what speakers reveal about themselves, for example, the Rev. J. G. Wood’s belief in the divine in nature when he writes, in 1885, of “the young being called into existence.”

It is a modest scholarly exploration into the history of illustrations of the opossum, beginning with Comte de Buffon’s 1785 engraving, copied by Thomas Bewick, which was reproduced extensively and, although not the Virginia opossum, was named as such at least as early as 1792.

The book is also a collection of printmaking (and art making) processes in service of illustrating the opossum. Original prints representing various media by nine artists are tipped in: screen print, letterpress, linoleum cut, wood engraving, lithography, mezzotint, inkjet pigment printed photograph. Also tipped in are injet pigment reproductions of wood, copper, and steel engravings from past centuries and of an offset image and photographs, such as one of Isaac Witkin’s bronze sculpture Ode to a Possum.

Finally, it is a sampling of historical features of the book: the 18th and 19th century exuberant title page, the use of the golden section for page design, the tradition of commentary text surrounding a primary text, and the limp-vellum type binding.