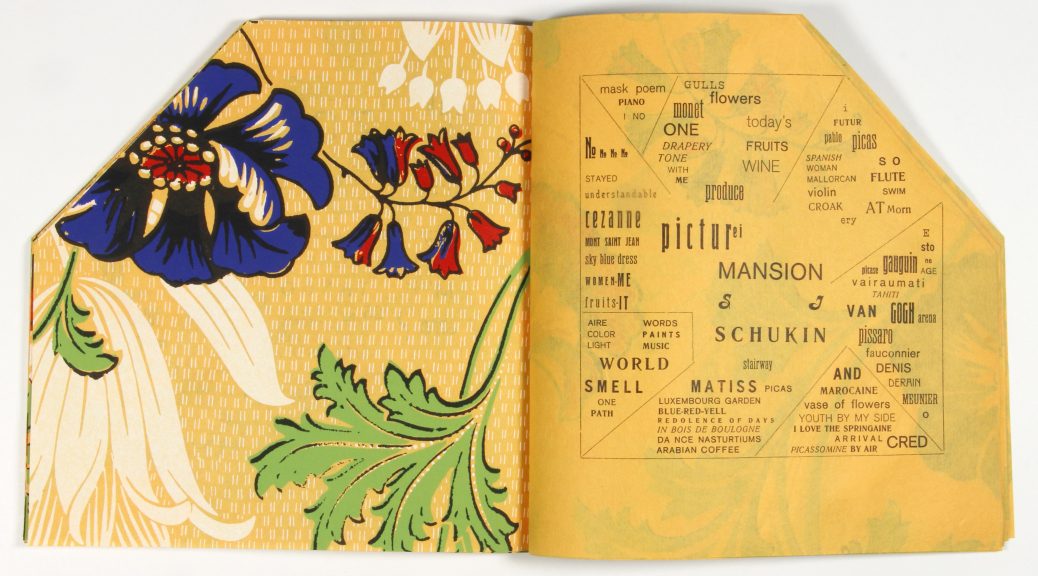 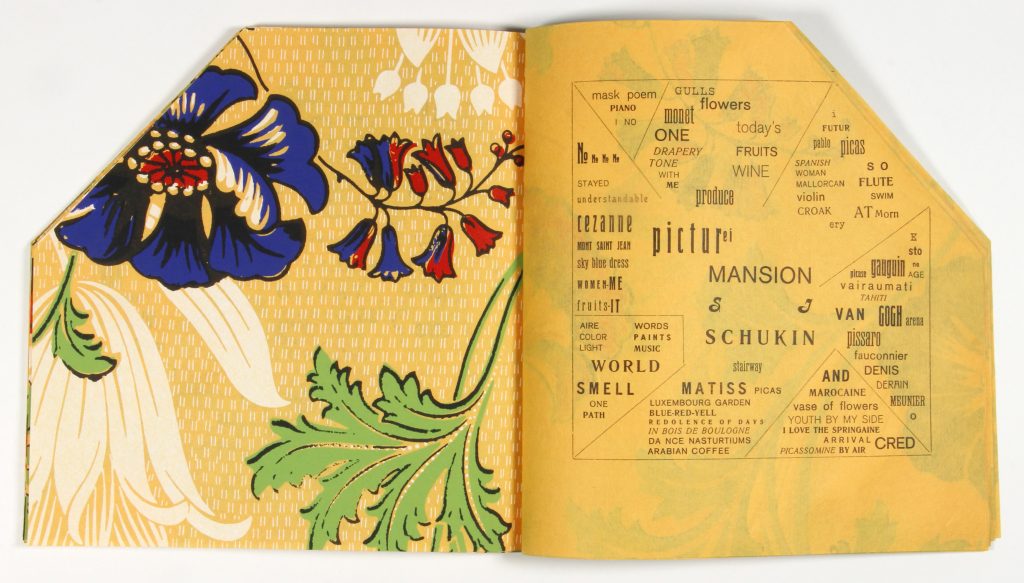 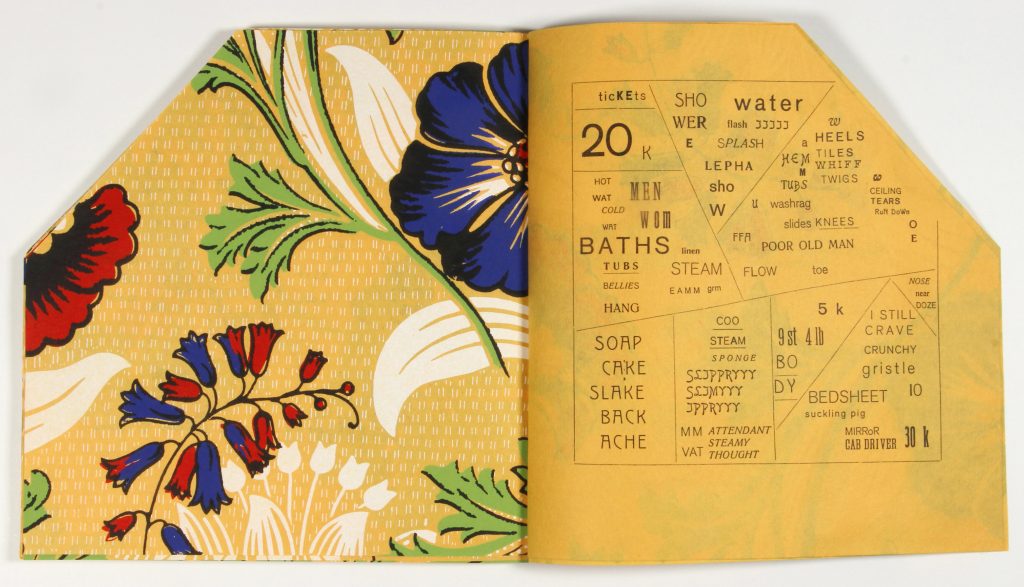 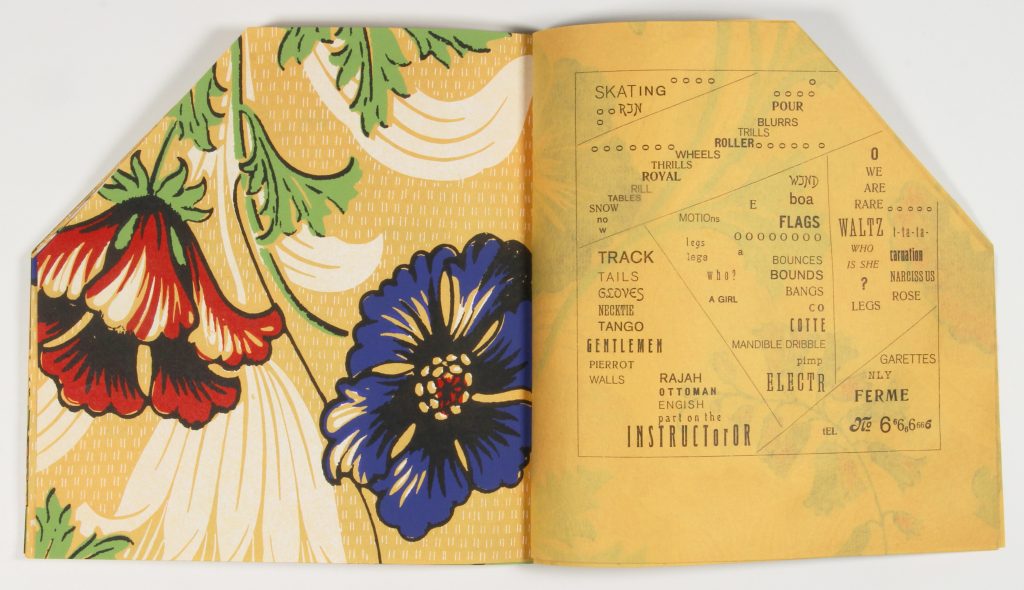 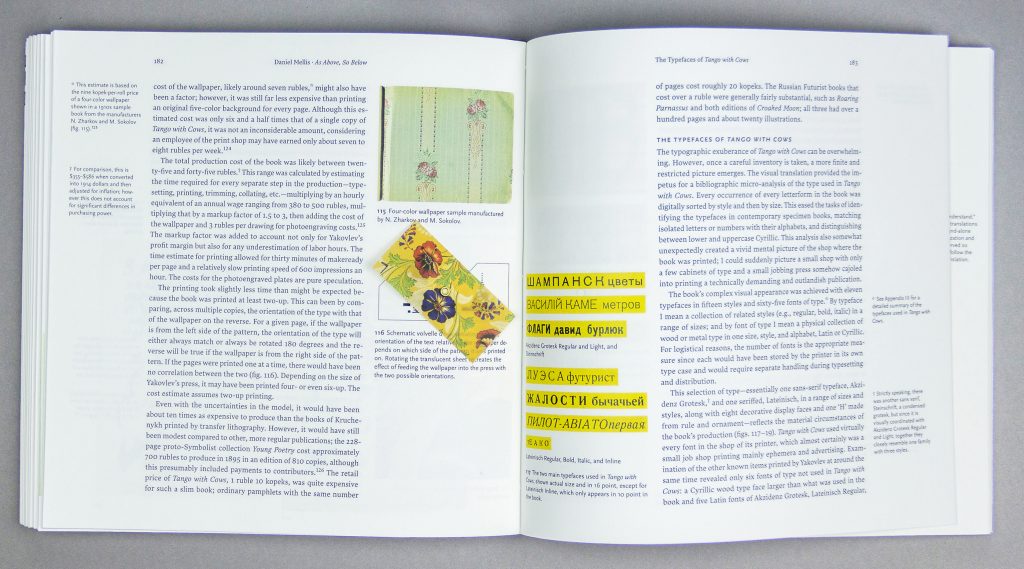 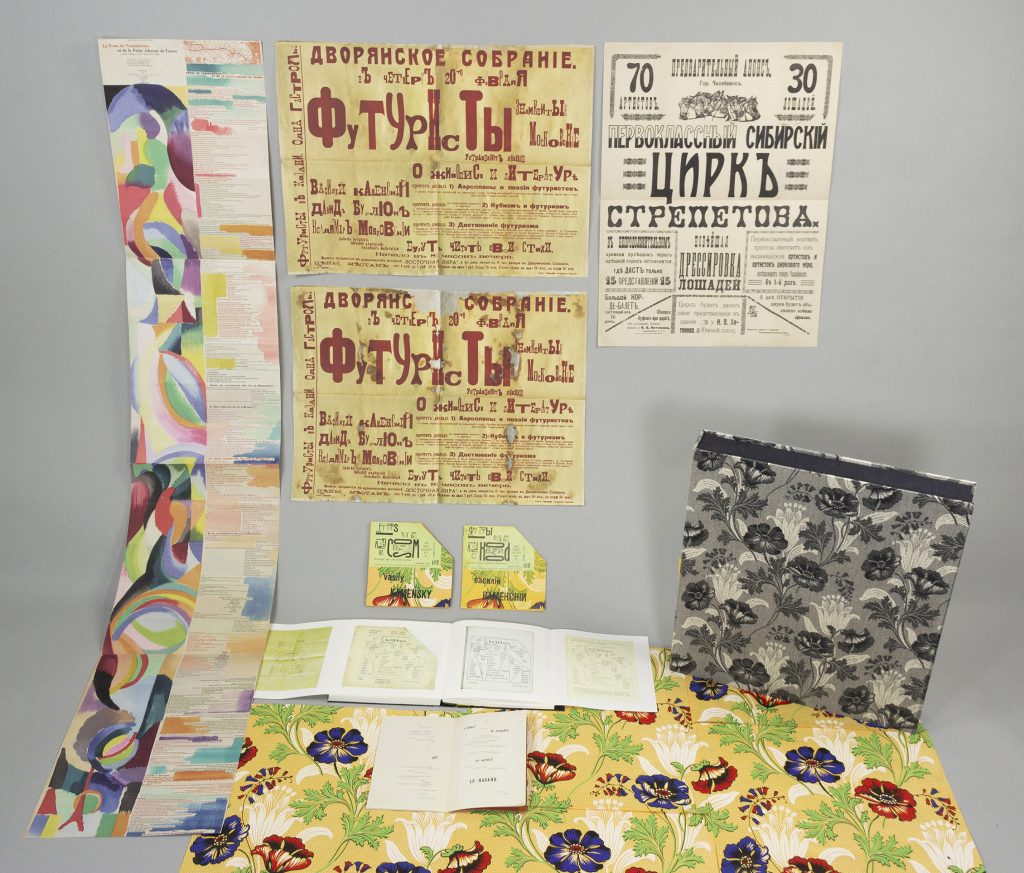 Tango with Cows: Translation, Facsimile, and Commentary is a project by Daniel Mellis and Eugene Ostashevsky. It is a translation into English of Tango with Cows by Vasily Kamensky—a key artifact in the history of Russian Futurism, graphic design, visual poetry, and artists’ books—that simultaneously and meticulously preserves the typography, design, and materiality of the original. It is accompanied by a facsimile of the original, an extensive commentary volume of over three hundred pages, and an additional portfolio with six large format reproductions.

Tango with Cows is an iconic work of the Russian avant-garde and experimental literary typography. Printed in Moscow in March 1914 on pentagonal sheets of floral wallpaper, all of the book’s poems have a prominent visual form created entirely with typography. The most experimental works in the book—the six “ferroconcrete poems”—dispense with linear order and explore the spatial possibilities of the printed page. The book also includes two illustrations by David Burliuk and one by his brother Vladimir.

Most of the book is about the modern city and modern technology. There are poems about aviation (Kamensky, the first ever poet aviator, performed exhibition flights before crashing his plane in 1912), the movies, the telephone, the circus, Moscow night clubs, roller skating, and Sergei Schukin’s collection of modern painting. The poems also make repeated references to the global tango craze of 1913–14.

The extremely innovative typography of all of the poems replaces the conventions of literary typography with those of advertising. Instead of a neutral and unobtrusive design meant to allow words to speak for themselves, the many different sizes and styles of type inflect and structure the reading experience of every poem. Utilizing almost every font of type in the shop of the book’s printer, every letter in the book demands to be seen as well as read.

The text of Tango with Cows has been superbly translated by Eugene Ostashevsky, an award-winning translator of the Russian avant-garde. The translation skillfully renders Kamensky’s complex Russian Futurist wordplay while simultaneously working within the typographic constraints of the original.

Daniel Mellis has recreated the appearance of the original as closely as possible. The wallpaper has been carefully remade using five-color screen printing on custom-made Japanese paper. The colors were precisely matched—in saturation, opacity, and texture against the copies held by the Getty Research Institute and the Art Institute of Chicago and the printing idiosyncrasies in the former’s copy have been recreated page for page.

The typography was precisely recreated in English by identifying and redrawing the original Latin designs of the Cyrillic typefaces used in Tango with Cows. Up to seven fonts for each typeface were used in order to take into account significant variations of design, proportion, and weight in the different sizes of the metal and wood originals. Careful attention was paid to not only the shape of the letterforms but also the letter and word spacing, the orientation of every word, and damage to individual pieces of type. Although the translation was composed digitally, it was letterpress printed. This allowed it to shed the monotonous perfection and uniformity of digital output and instead to contain all of the subtle variations of texture and appearance of the original printing process. The binding was replicated with two cupronickel staples (to prevent corrosion) and glued on covers.

The commentary contextualizes the typography, cultural references, and poetics of Tango with Cows with two essays by Ostashevsky, one by Mellis, a foreword by Johanna Drucker, and five appendices. It is lavishly illustrated with well over 350 color images, seven tipped-on overlays, a double gatefold, and a miniature volvelle.

The additional portfolio contains reproductions that could not fit in the commentary book: full scale facsimiles of the 1897 printing of Un coup de dés by Stéphane Mallarmé, La Prose du Transsibérien by Blaise Cendrars and Sonia Delaunay, a 1914 Russian Futurist poster together with a digitally restored version (the irregular outlines of the last three were trimmed by hand); a Russian circus poster, and seven sheets of book’s wallpaper recreated with the same five-color screen-printing as the translation.

Everything is housed in an oversized clamshell box covered in custom-woven fabric with the design of the wallpaper rendered in an elegant grayscale.