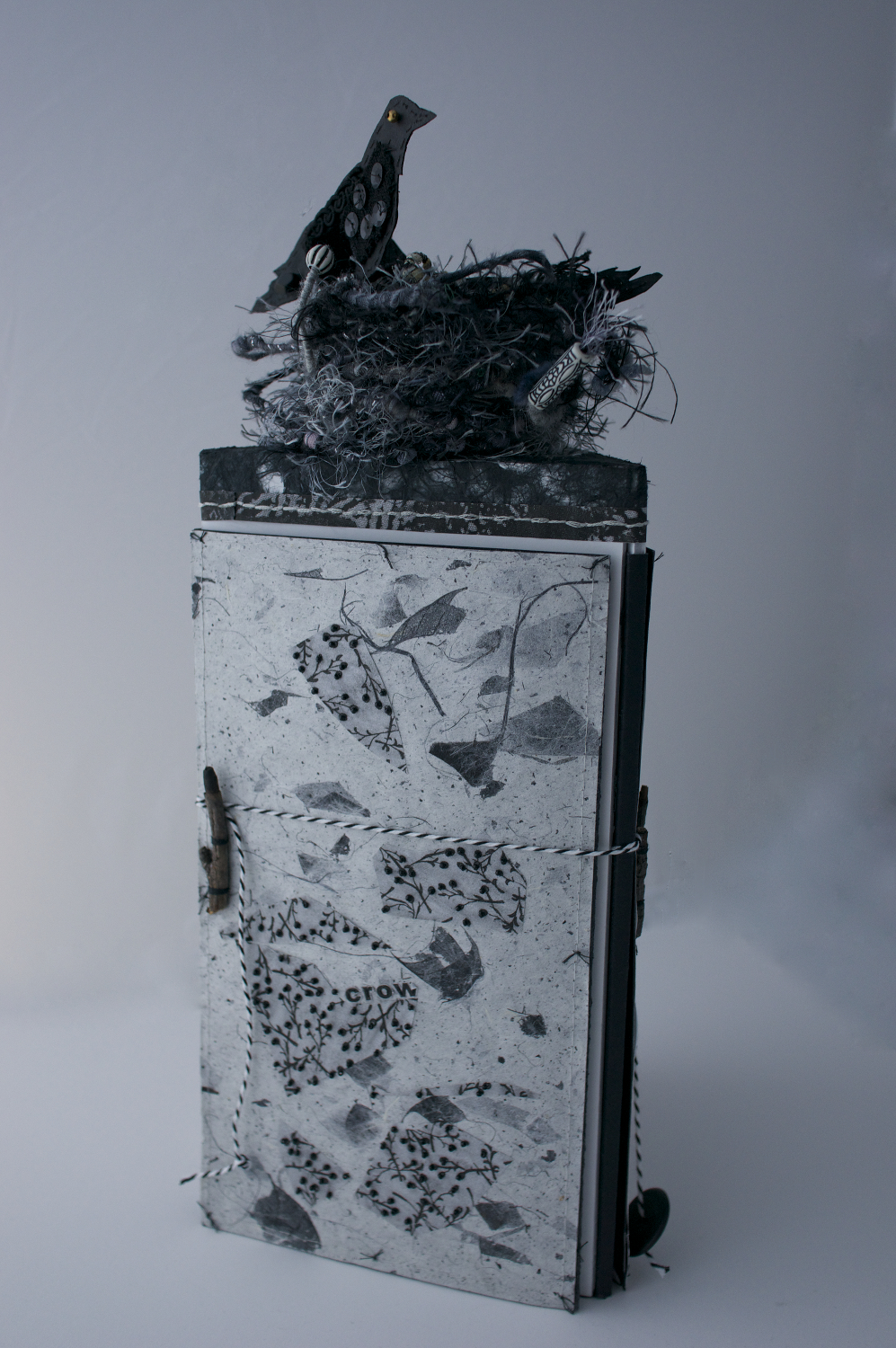 The closed book. Shown is one entry of the book which has three entries. This entry cover consists of two different papers beaded with black seed beads. The word crow, very small, is sewn on paper which contains threads and natural looking materials. This cover, as are the others, is held closed with a twig latch and black and white twine. On the top of the sculpture book is a nest of wire wrapped with various yarns containing two, beaded, paper crows.

The entry cover of this side of the book, not visible, is the paper described above. The second panel shown is the Latin name for crow, corvus. All materials in the book are sewn to their papers. The black paper cut outs are of ravens fighting, the poem shown is by Karen Herseth Wee and the last panel, decorated with a needlework rendering of a crow’s foot, contains a poem by Mary Easter.

The entry of this side of the book, also not shown, is another paper also sewn and beaded. The second panel, visible on the image, is the sewn and decorated word murder which describes a grouping of crows. The third panel consists of cut outs of crows sewn and beaded. The poem, which is my poem, sewn to the fourth panel is entitled like the book, When crow moved into town. The pocket panel, embellished with a needlework crow’s head, is a fable, “Two Crows and a Woman’, by Patsy Dew.

This entry, barely visible, is the third paper beaded and decorated with the word crow. The second panel is a Native American word for crow, Kangi. The third panel a Native image of a crow done with needle work and beaded. The poem is by Anne Sovik and the piece in the pocket on the fifth panel, which is decorated with a crows egg sewn to the pocket cover, is a tale of a crow encounter by Mary Ellen Frame.

My understanding of the word “artist” is wobbly. I am unsure, at times, who or what an artist is. On my good days I am an artist, on my not-so-good days, I am not. The school children I work with are all artists every day.

Those who make artistic attempts do so, I think, because they love to and they must. For me, it is as simple as that. My art is influenced by my education and by a father who let me sit with him at his drafting table, an aunt who taught me to sew with beads. My art is my history, my genes. But in truth I am just an old woman who makes things, who sews and who reveres the life outside her window. A person who realizes what is most important is the ordinary and the close at hand.

Last year I moved to a new home where the window of my workroom looks out on a pond. From this vantage I can glimpse into the life of my neighborhood birds: the ducks, the waders, the tiny song birds, the American crows. The opportunistic, intelligent, fierce and very cunning crows. Corvus brachyrhynhos, family Corvidae. Where I might have earlier seen only a single side to my crow observations, understandings began to change as I started to read, to study. At the same time, I became aware that members of my poetry workshop had written poems that included images of crows, and that two members of another writing group I am in, also had done pieces about these ubiquitous birds. Pieces I have included in my artist’s book.

A three faceted sculpture, my book about crows is dimensional, like my new found discoveries about the common birds. It includes words that describe them, the images they project. With stitches I rendered their feet and their feathers, with cut shapes I attempted to describe their anger and their grace. My use of Native word and image honors the respect given to crows by the people of my paternal grandmother.

Using imported papers, thread, beads, yarn, only in shades of black and white, I told crow’s story which became my story. The crow pair on top the sculpture book, black and shiny in their nest, represent, as nesting birds do, the beginning. Each point of entry into the book, there are three, are secured with a twig. Structurally, the 60 degree triangle unfolds into three sections of interior panels each of which contain a major poem, a pocket which contains writing about crows, a crow word and an artistic rendering of crows. The book is not merely content about these common birds it is, in its coloration, variations, playfulness and complexity, a rendering of crow. But the final words of my crow poem best explain to me, I think, my artist’s book. “When crow moved into town…I understood what the sparrows were saying.”