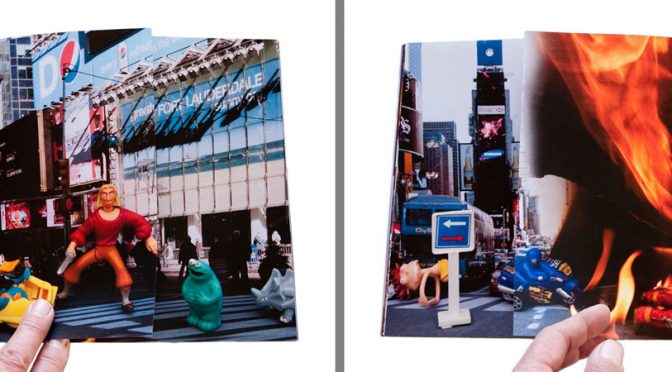 In this spread from Drone 3, as the half page is flipped the scene changes from one depicting a display of toys set in a New York City street to one where the toys are burning in a large blaze which dominates the page. The image was made by photographing the set up, setting it on fire and rephotographing it as it burned.

The book project Drone / 1,2,3 comprises three pamphlet-stitched books collected in a presentation tin along with a three dimensional image object of a universal remote. The project deals with remote projections of power through metaphors developed around three meanings of the word “drone:” a male bee, a dull noise, and remote control military apparatus.

Drone 1, based on the drone as the sluggish male bee who lives off the work of the hive, creates new images of colonial history. Drone 2, based on the metaphor of history as droning white noise, juxtaposes images of the good life in the United States with watercolors of violent scenes. Drone 3 reflects on current events such as the use of drones for combat, video games which desensitize children to remote killing, and suicide bombings which are also a form of remote warfare. The books are structured so that between each full page is a half page: as one flips through the books, each image spread is modified by the half-page flap to create new juxtapositions.

The photographs and drawings are by the artist except those from colonial histories. The project was published in an edition of 250 by Visual Studies Workshop Press in 2010. The 9×12 inch tin holds the three 8.5×8.5 inch 36 page books along with the 8.5×2 inch remote controller. This remote, which is in fact the one for my television, looks normal but the logos have been meticulously relabeled for other purposes: Aim, Kill, Counter/agt Intel, IED menu, Docum’t/Victim, Kafir Select, Deploy UVA/IED, Survey/Display, IED Sel Road, Detonate… This reflects the banality of evil so aptly described by Hannah Arendt.