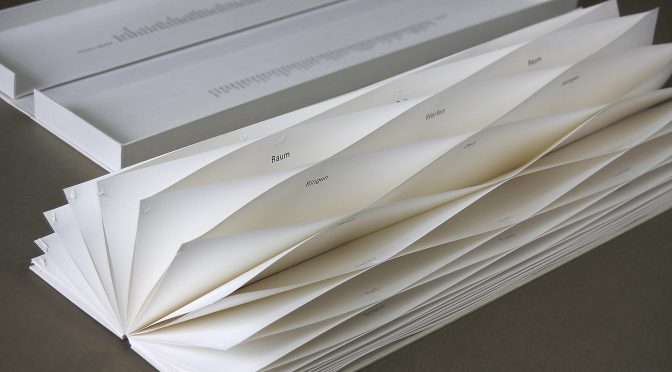 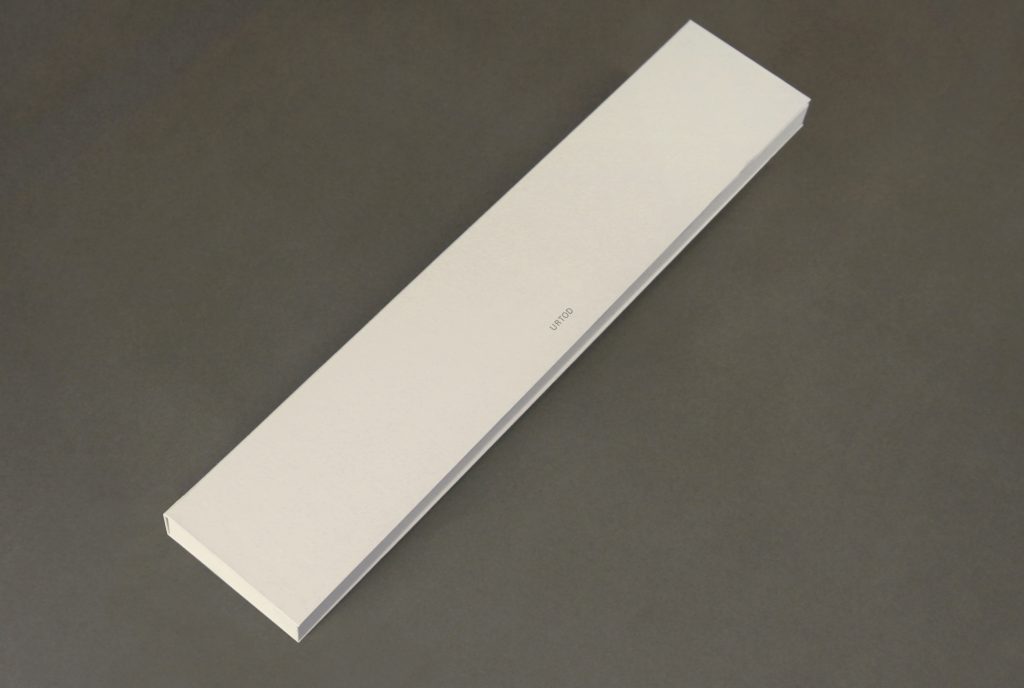 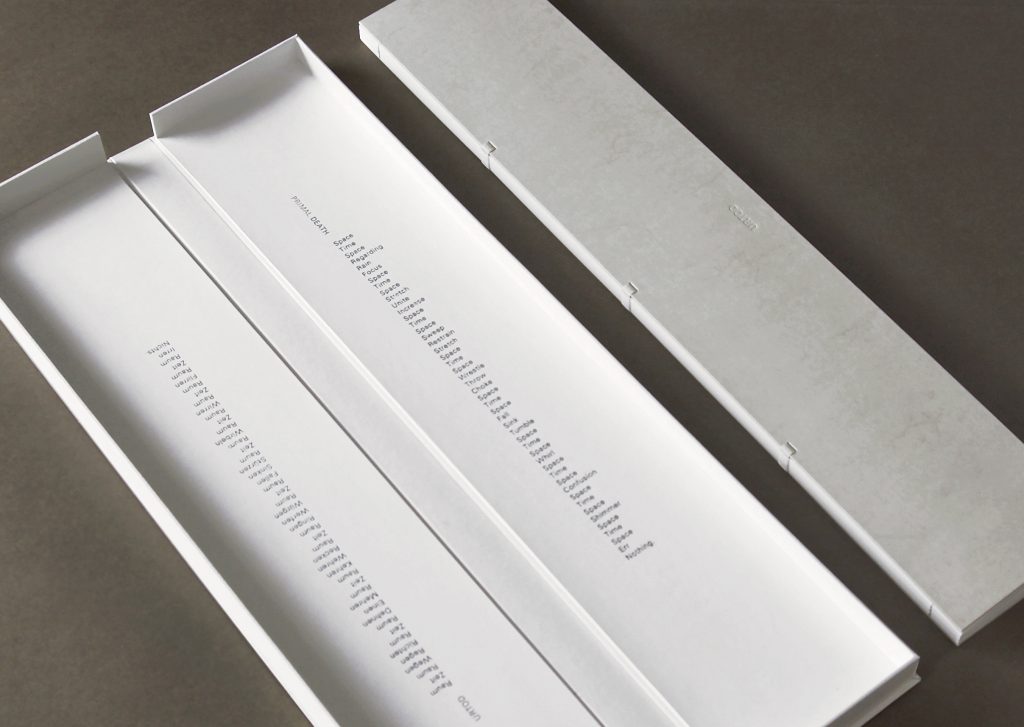 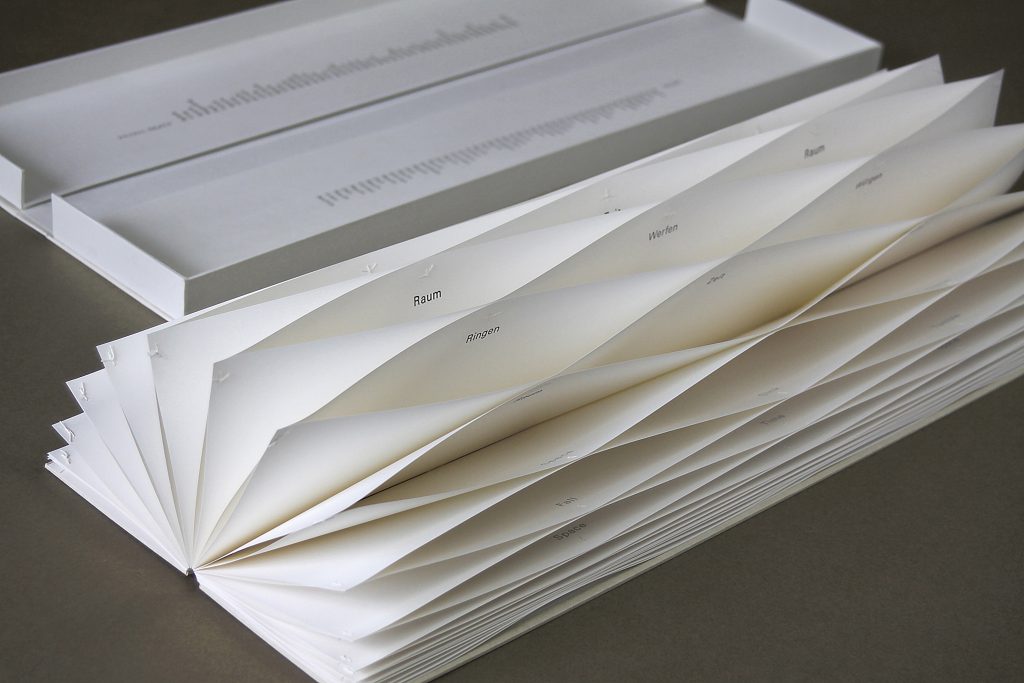 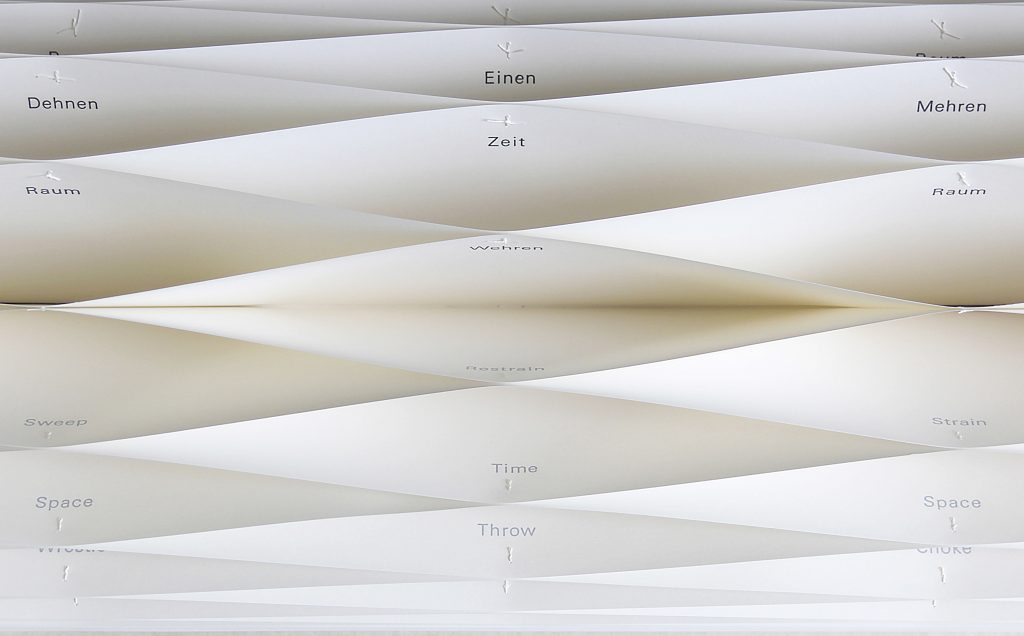 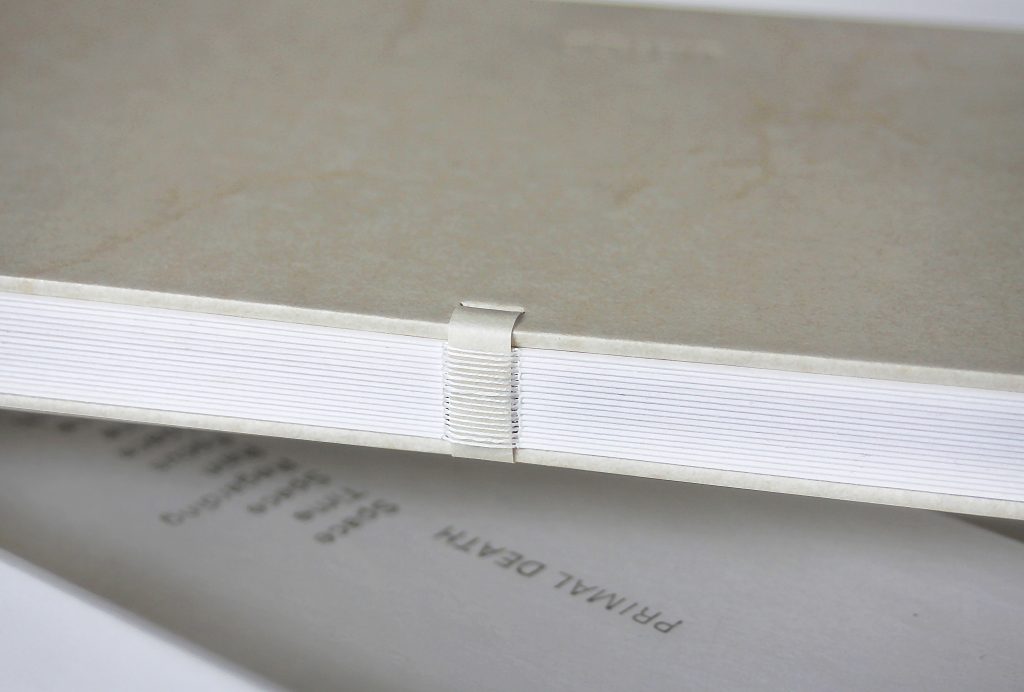 August Stramm (1874–1915) was a German poet and playwright, and considered one of the first expressionists. Stramm’s poems stand out clearly from those of others because of their conciseness and hardness, and because of their far-advanced language experiments. “Urtod(Primal Death)” is written in 1915, the year he was killed in action on the Eastern Front during World War I.

The unusually narrow portrait format of the box visually follows August Stramm’s Urtod and thus seems to be the perfect habitat for the poem. Its line length never exceeds that of a word, so it seems to grow slenderly in height. However, once the book inside is opened, a fan-like book space is revealed, the pages of which are interlinked and which want to be viewed in a landscape Format. All of a sudden, the small spaces are revealed, each containing a single word component of the poem. It is an invitation to the viewer to follow the reading direction suggested by the book structure.

I found every single word intense and weighty, as the time gap between the lines is more than a hundred years. For this reason, I gave each of the 47 words a unique space and embossed them to emphasize them.

Hyewon Jang is a book artist who creates delicate sculptural forms and spatially changeable structures that extend far beyond books in the classical sense. The main focus of her work is the creation of a book structure and form to support and reinforce the context of each book.

After graduating BFA in Textile Art and Fashion Design at Hongik University in Seoul, Jang moved to Germany, where she first encountered the book art genre and was fascinated by its charm.

Due to her enthusiasm for the medium, she began studying book art in 2010 at the Burg Giebichenstein University of Art and Design in Halle Germany, which she graduated with a diploma in 2016. Then, from 2016 to 2018, she completed the Meisterschülerstudium (master class course) with Professor Sabine Golde.

During the days of her master class studies, she created five artist’s books on the issue of spacing the pages. spacing the Pages describes, on the one hand, the space that the artist has changed between the pages and, at the same time, the active modifiability of this space by the reader. Even in the classic book form, the movement of the semicircle creates space when turning the pages. Jang started the project with a playful approach, like exaggerating or highlighting this space that people may not be consciously aware of. During this project, she focused on expanding the scope of the medium as a book and exploring the various possibilities of turning the pages.

Since her professional career, she has been awarded several prizes and grants, including the Artists Book Prize of the Herzog August Bibliothek Wolfenbüttel 2018, a six-month working grant from Art Foundation Saxony-Anhalt 2019, and a one-month Artist-in-Residence grants from the Künstlerhaus Lukas in Ahrenshoop 2019.