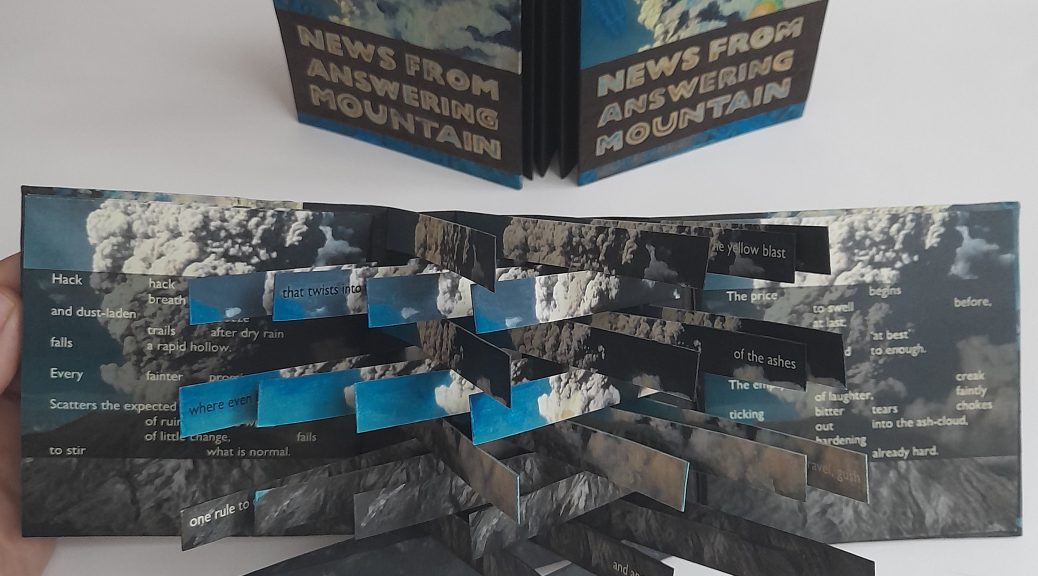 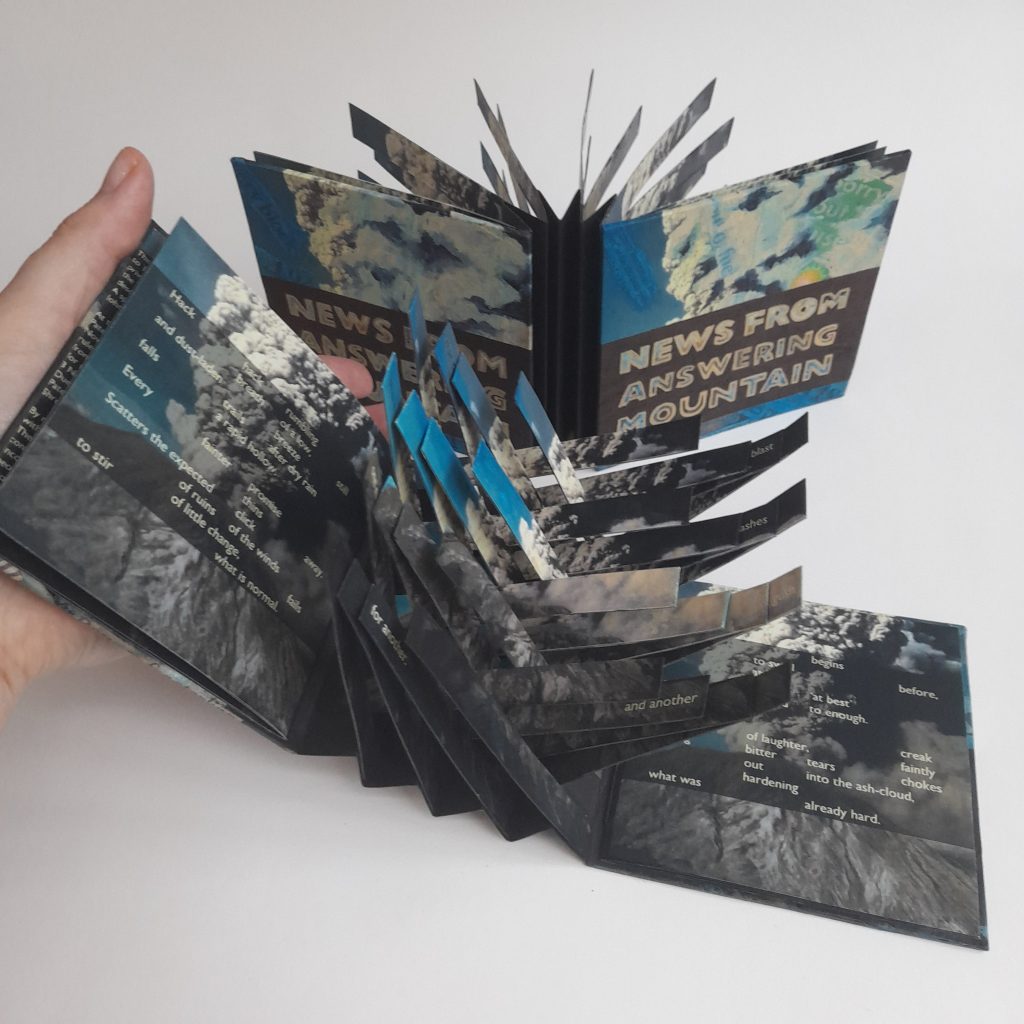 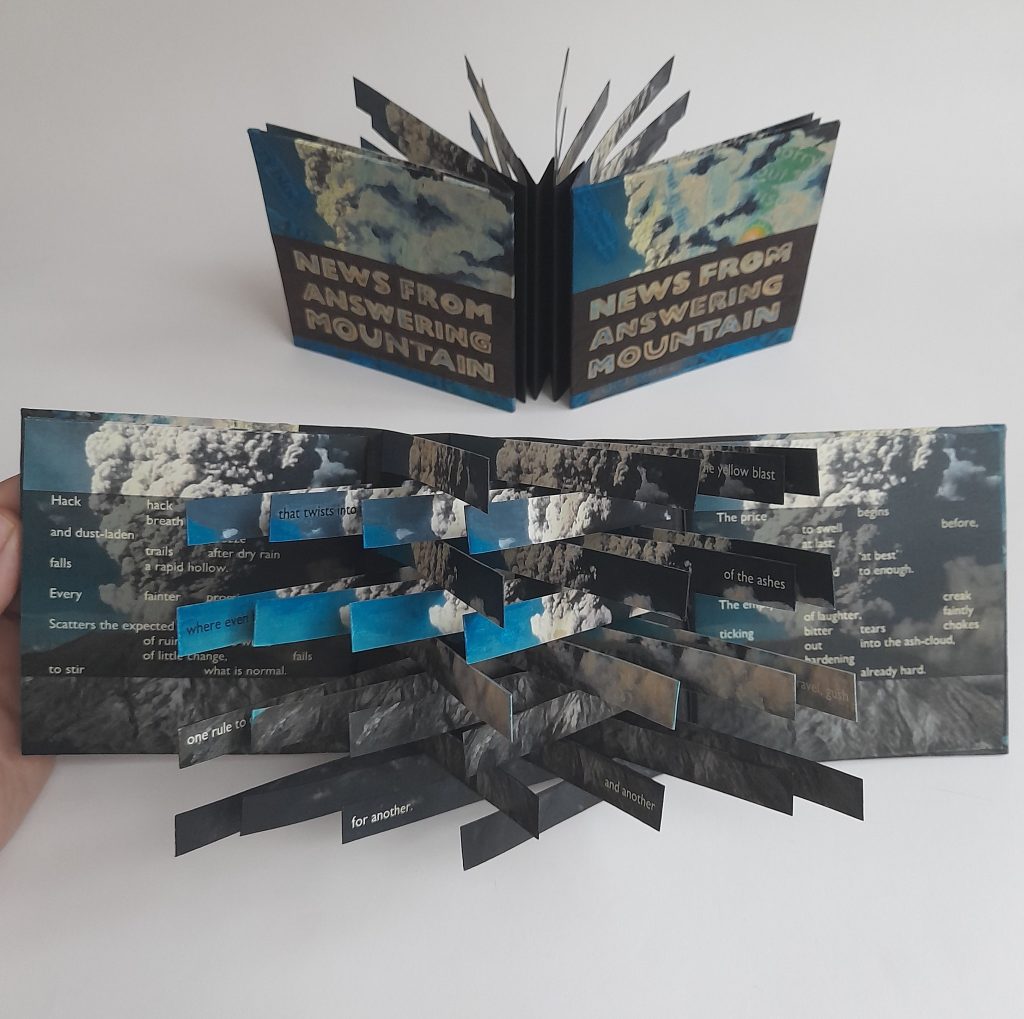 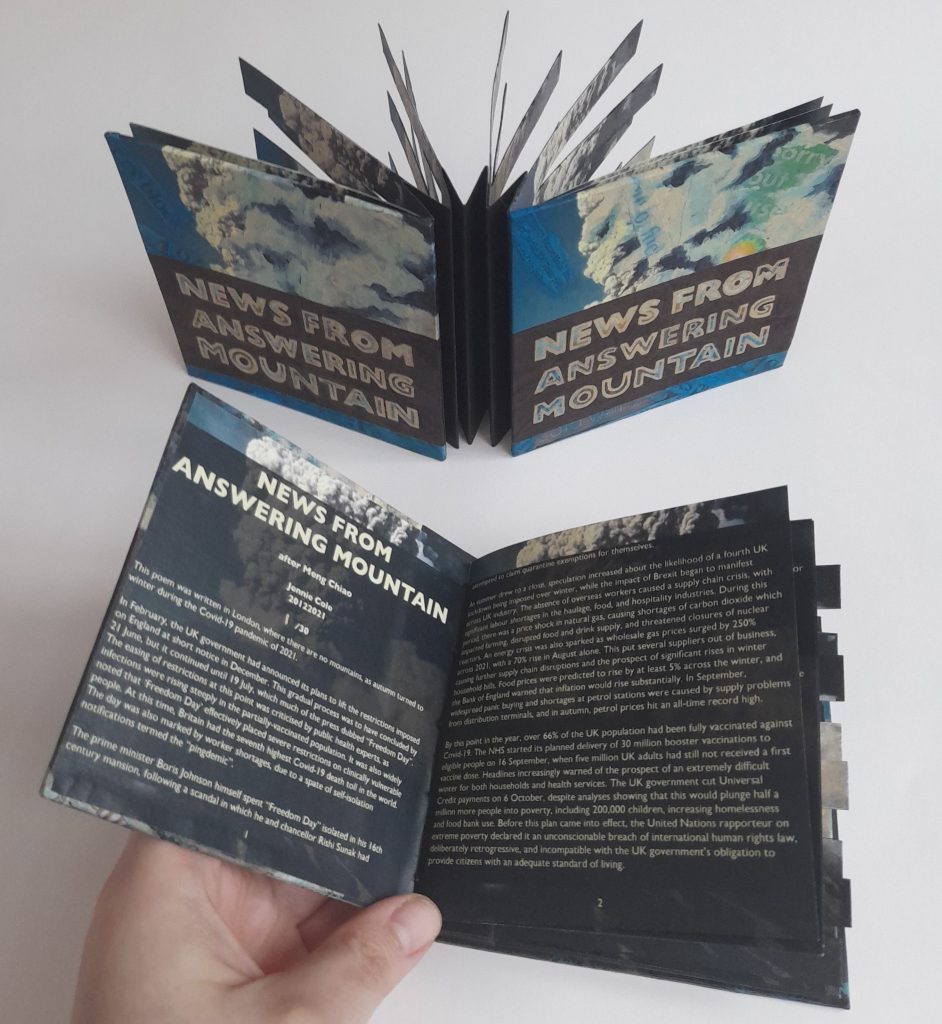 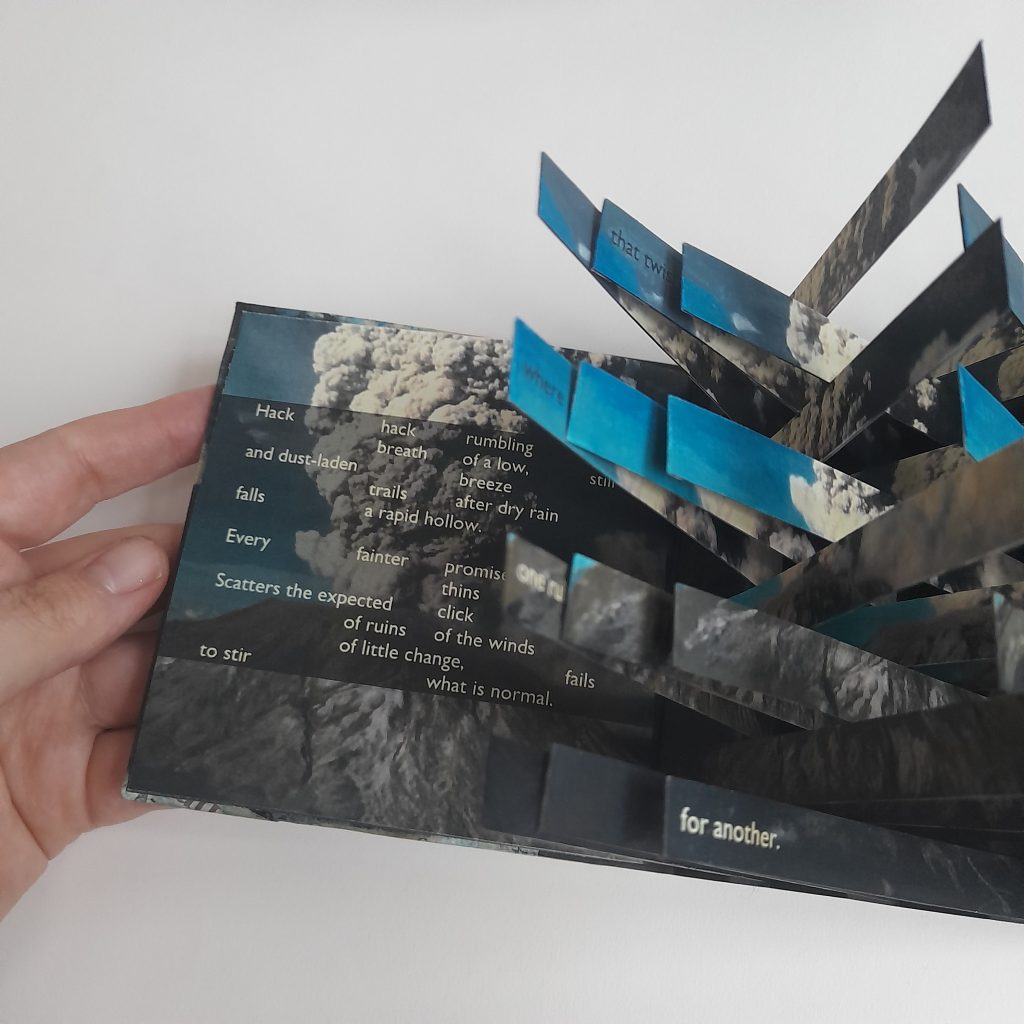 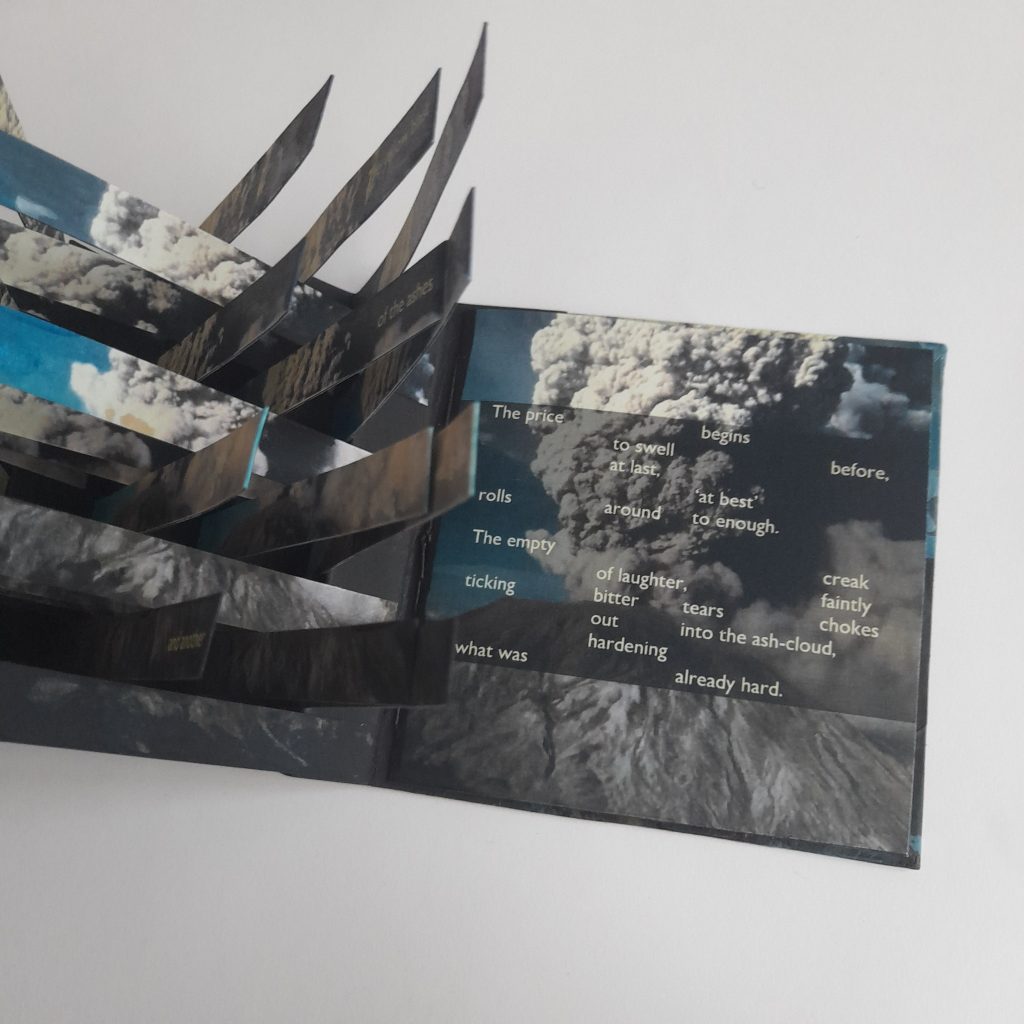 News from Answering Mountain is a poem of text and image in the form of a hand-painted flag book. It is the second artist’s book in a small series about the Covid-19 pandemic, loosely based on ancient Chinese Mountain poems of the T’ang period.

News from Answering Mountain was written in London, where there are no mountains, during the transition from autumn to winter in 2021. The book that preceded it was written between summer and autumn of 2020, and focused on the early experience of the pandemic as a health crisis, while News from Answering Mountain is more concerned with the political turmoil and socioeconomic problems developing in the UK as the pandemic continued. The pamphlet-stitched pages at the front and back of the book describe how these issues unfolded during this period. Between them is a poem of image and text that responds to these events, spread across the flags and facing pages.

The mountain featured across the covers, inner pages and flags of this book is the active stratovolcano Mount St. Helens, shown erupting on 22 July 1980, following its major explosive eruption on 18 May of the same year, often viewed as the most disastrous volcanic event in US history. The repetition and fragmentation in this sequence of images echoes the experience of living through the pandemic, traces of which are also represented by the collaged newsprint on the covers of the book, largely subsumed by painting into the image of the erupting mountain. This sequence of images becomes dramatically fragmented and spatialised across the flags that span the peaks of the concertina spine, creating the impression of an expanding ash cloud at the centre of News from Answering Mountain, with text from the centre of the poem dispersed throughout it. This conveys a sense of particulate matter spreading through air, as the book structure enables a spatial treatment of the mountain image along with the poetic text, supplementing its articulation of the struggle to breathe and survive.

I started making this series of artist’s books in 2020, with an accordion book of concrete poetry and newsprint[1]collaged images of Greater Ararat, titled Views from Absent Mountain, working from my home in London during the first national lockdown in the UK. I felt an unusually strong sense of placement at this time, living in isolated conditions in a usually busy city, while reading stories about developments in the pandemic across local, national, and international news. This odd feeling combined a sense of extreme disconnection with a contradictory experience of the pandemic as a collective crisis, as I remained aware of its profound and continually unfolding effects across the world. When I learned that many people who lived in or near the countryside were coping with lockdowns and social distancing by spending more time in their natural surroundings, this seemed like a perfect way of reconciling these feelings. However, there wasn’t an opportunity to do this in the city.

One of the ways I found myself responding to this situation was by rereading some of my favourite rivers-and[1]mountains poems of ancient China, and particularly poets of the T’ang Dynasty, such as Meng Chiao and Liu Tsung-yüan. This period of Chinese history (618-907 CE) is remembered as an age in which great reforms and cultural advancements gave way to political corruption, crisis, and an uprising known as the An Lushan Rebellion (755-763 CE), which devastated the country. However, this period was also characterised by artistic richness, as seen in the work of poets such as Meng and Liu, and the transformative approaches that their changing circumstances prompted them to embrace.

In his book Mountain Home, David Hinton describes the archetypal scenario in the rivers-and-mountains tradition of Chinese poetry as “giving up the empty pursuit of professional ambition and returning home to the more spiritually fulfilling life of a recluse in the mountains.” In the cultural context of ancient China, this was not an act of escapism or sentimentality, but the spiritual cultivation of wilderness according to traditional Taoist cosmology, which “recognises earth to be a boundless generative organism, and this vision gives rise to a very different experience of the world.” Hinton accordingly characterises such a departure as a return “to a life in which the perpetual unfolding of Lao Tzu’s organic cosmology is the very texture of daily experience”, and in which poetry “articulates a profound and spiritual sense of belonging to a wilderness of truly awesome dimensions”.

My initial books in this series have particularly been based on the poetry of Meng Chiao, due to his transformative approach to poetry as a means of generating new experiences. His poems convey scenes of transcendent beauty, punctuated by the presence of spirits, strange natural forms, and poignant images of decay. Their tone of mournful introspection is typically marked by a sense of vastness and peril, and intimations of order unraveling.