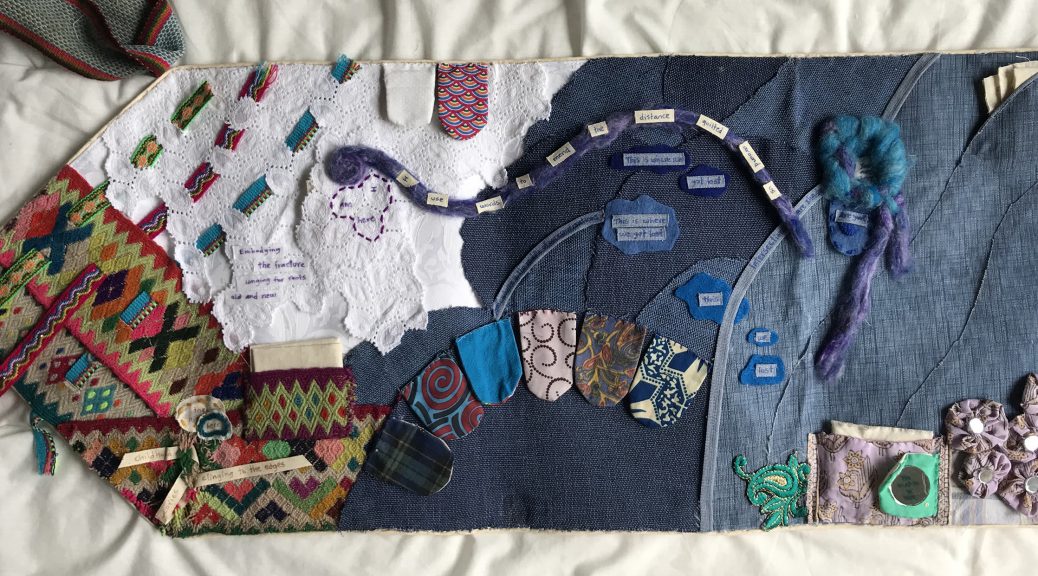 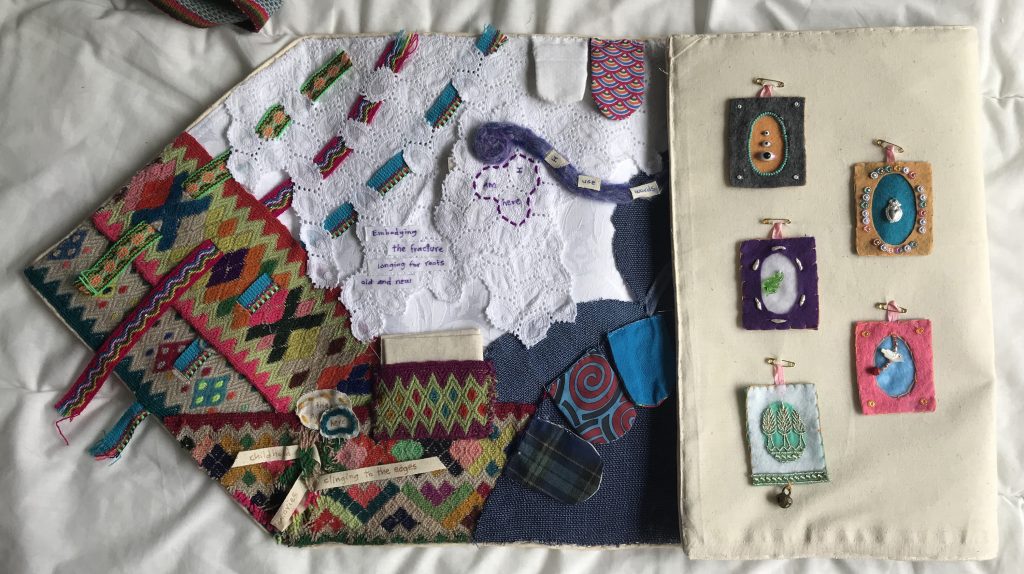 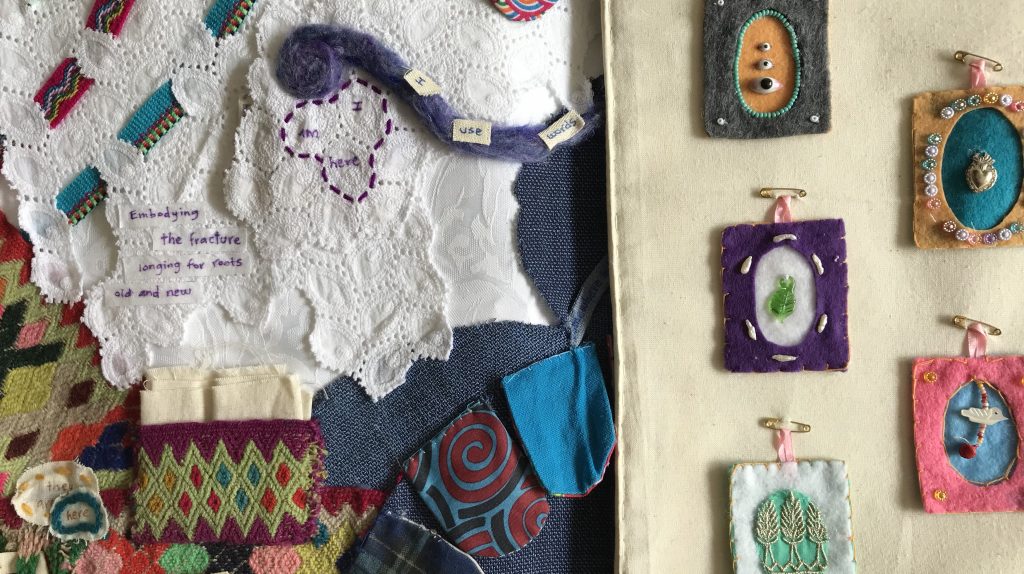 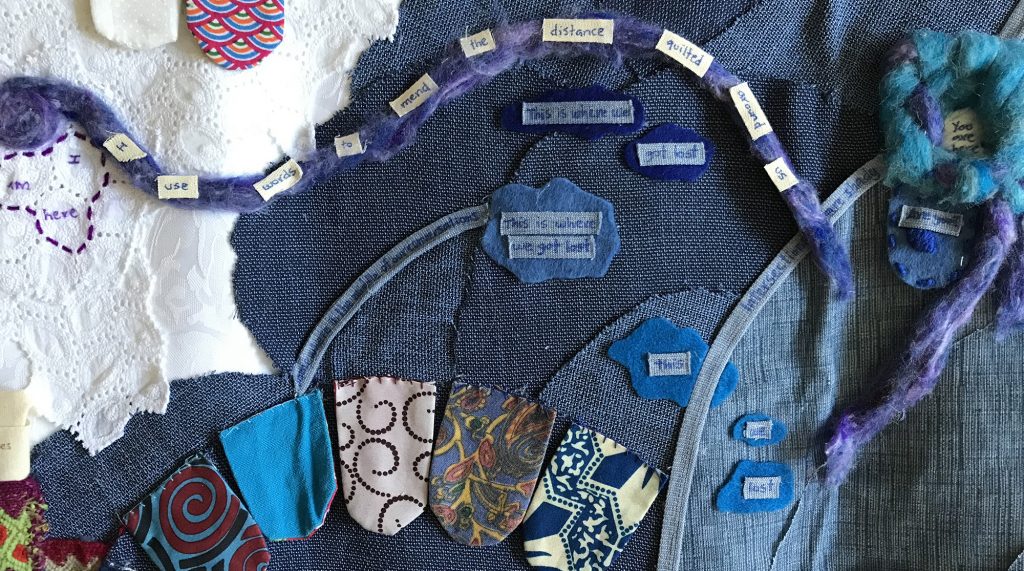 aWAY was created as a response to the physical and symbolic distance of being an immigrant– away from my country of origin, Peru, my roots and my family, but also lost in a path of miscommunication, silence and hidden truths, especially upon realizing my sister was a victim of domestic abuse. The book was materialized in an attempt to find a way to deal with it all, while being away. Feeling misplaced, I started by retracing our tracks in the hopes that I would also find a way to bring us back together.

As I mapped this voyage, I discovered many veiled feelings and emotions– camouflaged for decades– begging to be revealed. Words, images, small knick-knacks and personal artifacts I had been keeping for years suddenly became relevant, in an exercise of personal archaeology. Shapes, colours and textures guided me in a path of resignification and transformation. The creative process became my own pilgrimage, a place and space of healing. The mending and weaving of fabrics felt like an organic response to the materials and artifacts I had at hand: while I tied and untied bits and pieces of my family’s history, I was also trying to mend the broken bonds between us. In my desire to find a guiding light and a sense of direction, I included amulets to protect us in the journey ahead. I was inspired by the sacred images known as detentes in much of Catholic Latin America, tokens meant to stop negative influences and promote miracles, signaling good omens. But the book also takes shape from elements that remain closer to my heart and my spiritual beliefs: my inclination towards Buddhism, and my sister’s Hinduist practice.

aWAY’s aesthetics combines these influences and the indelible mark of my own cultural heritage. Its foldable form resembles that of Tibetan prayer book bags, meant to carry sacred texts, while its transportable nature echoes that of the Cajón de San Marcos, a portable altar brought by the Spanish conquistadores in the 1500s and that evolved into what is now called the retablo Peruano, one of Peru’s most renowned crafts. The Andean ribbons pay homage to my country’s colorful weaving tradition, while the use of mirrors, Indian fabrics and embroidery are a tribute to this land’s textile history and craft, and a reflection of my sister’s and my own love of their culture.

On the surface, aWAY creates a false sense of place through the use of map conventions: the unmistakable “I am here” and colour patterns establish an awareness of location. However, the combination of overlapping textures, shapes and materials reinforce the idea of being lost, while the flaps and secret compartments confirm the existence of a hidden reality, kept invisible but ready to be revealed. The complex, multilayered and often contradictory nature of grief, loss, love, nostalgia and hope are translated into a highly haptic experience, divided into three parts. The invocations appear in the form of the delicate detentes as the book unfolds, before encountering the map of the journey in its full extension. On the back, the incantations reveal small actions and affirmations that may serve as an oracle, a prayer, a mantra, or anything/everything in between.

And while aWAY is my personal journey, it is rooted in universal feelings and experiences, affording the reader the possibility to embark on their own path of discovery. Behind the book’s aesthetic concerns and symbolic gestures lies the seed of another, broader interest that has become a constant of my artistic practice: to engage the audience in an immersive, playful experience that involves all of their senses. Provoking and empowering them into finding their own route, rhythm and pacing. By lifting flaps and uncovering secret messages, the reader becomes an active participant, zooming in and out of the story, getting closer or taking distance as needed. By appealing to their curiosity, they can start to look deeper. There is no established reading order, just as complex situations have no apparent order either. There is no particular way in or out. They too have to figure out their own way.