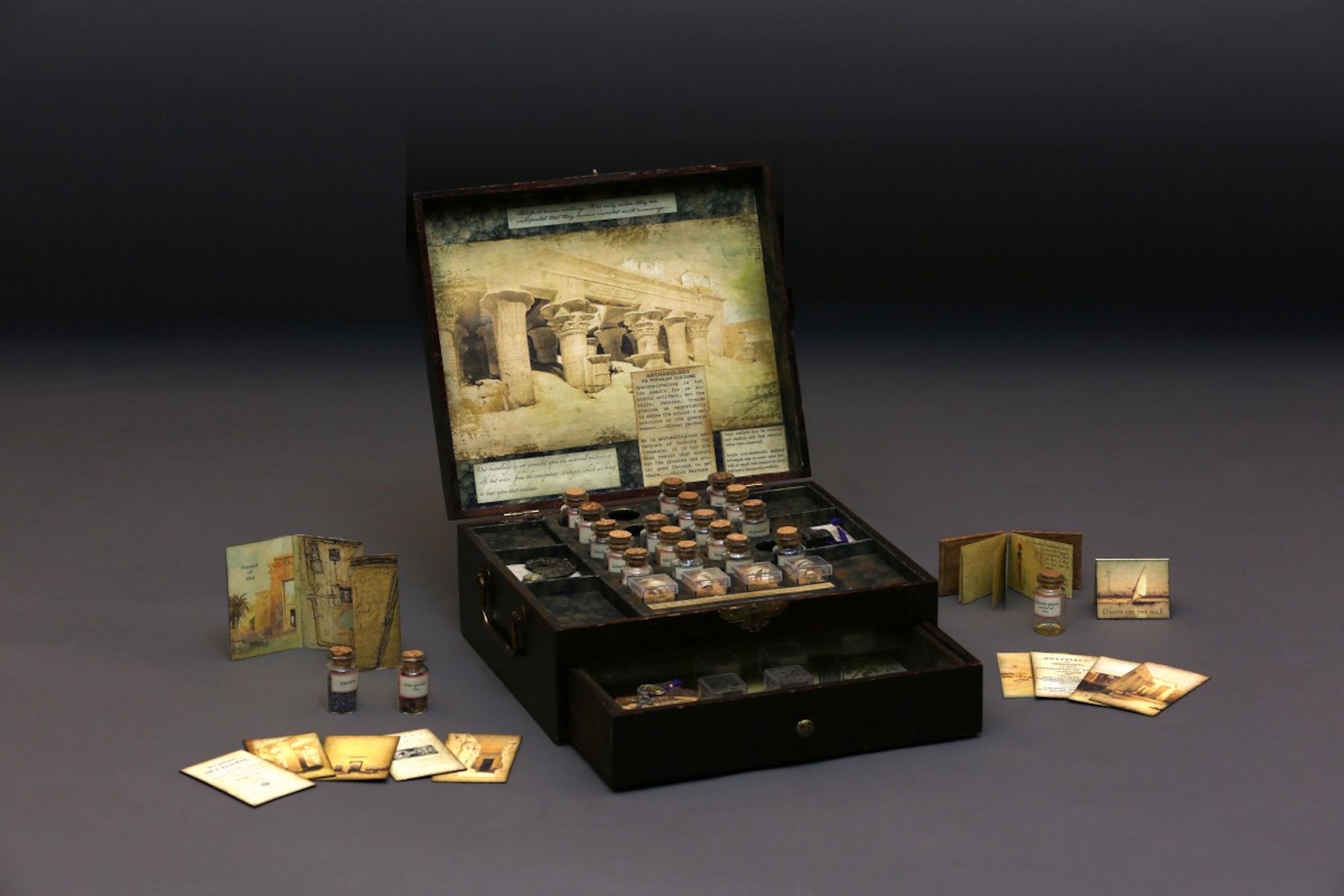 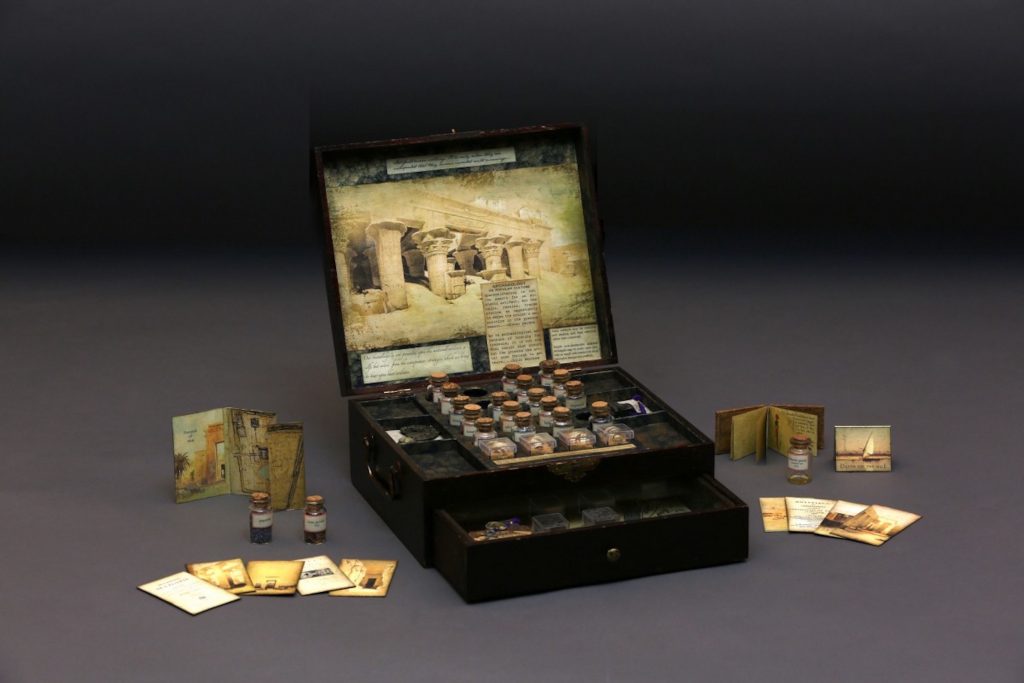 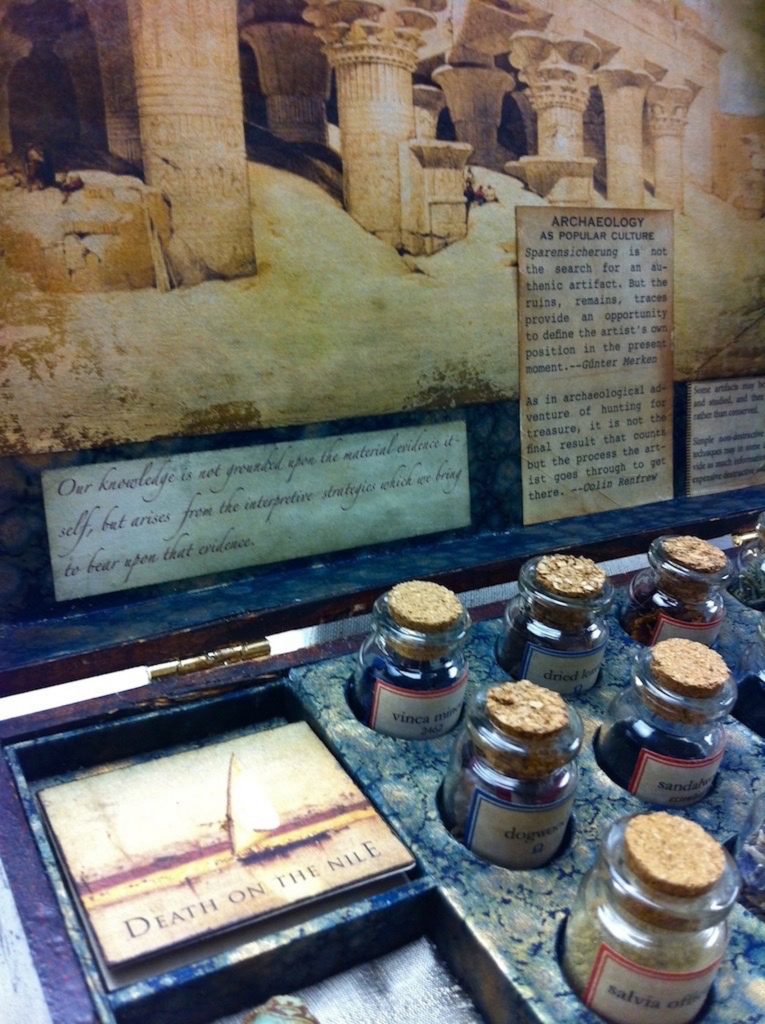 Closeup of lid and tray with newspaper clippings and “handwritten” note. 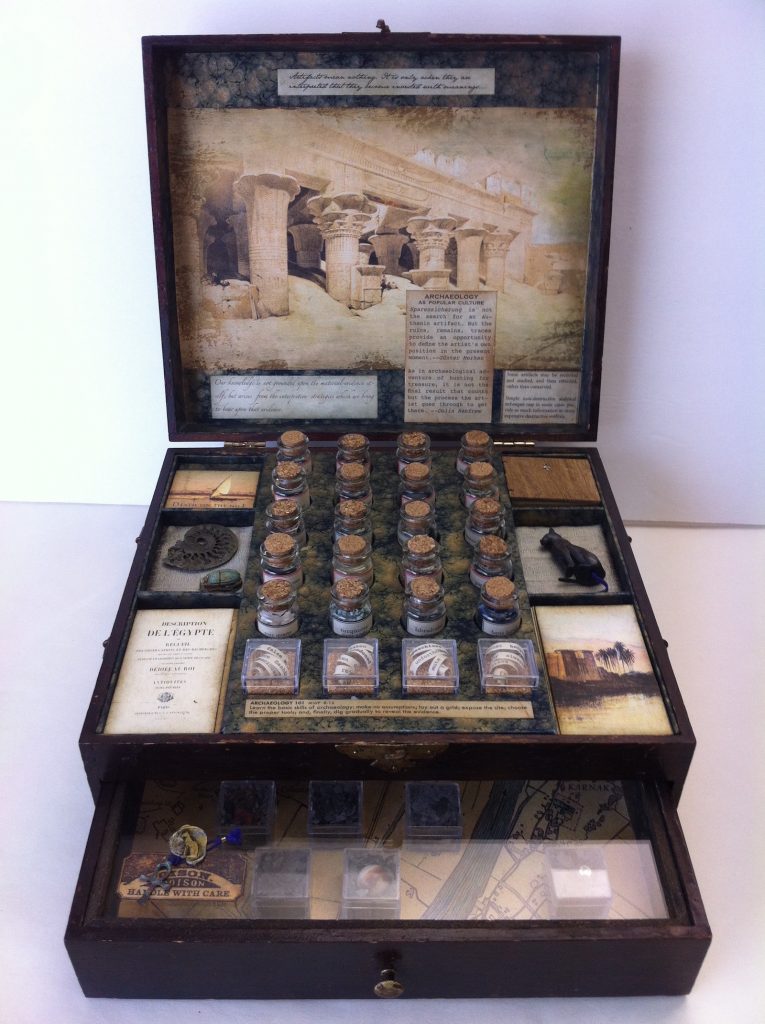 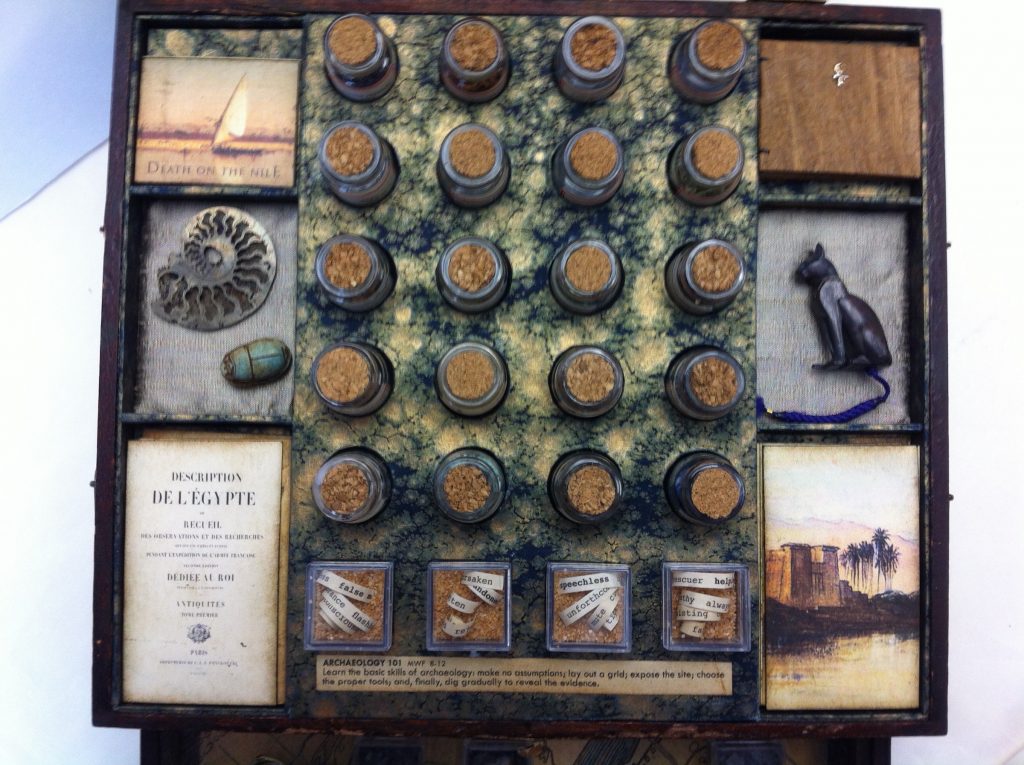 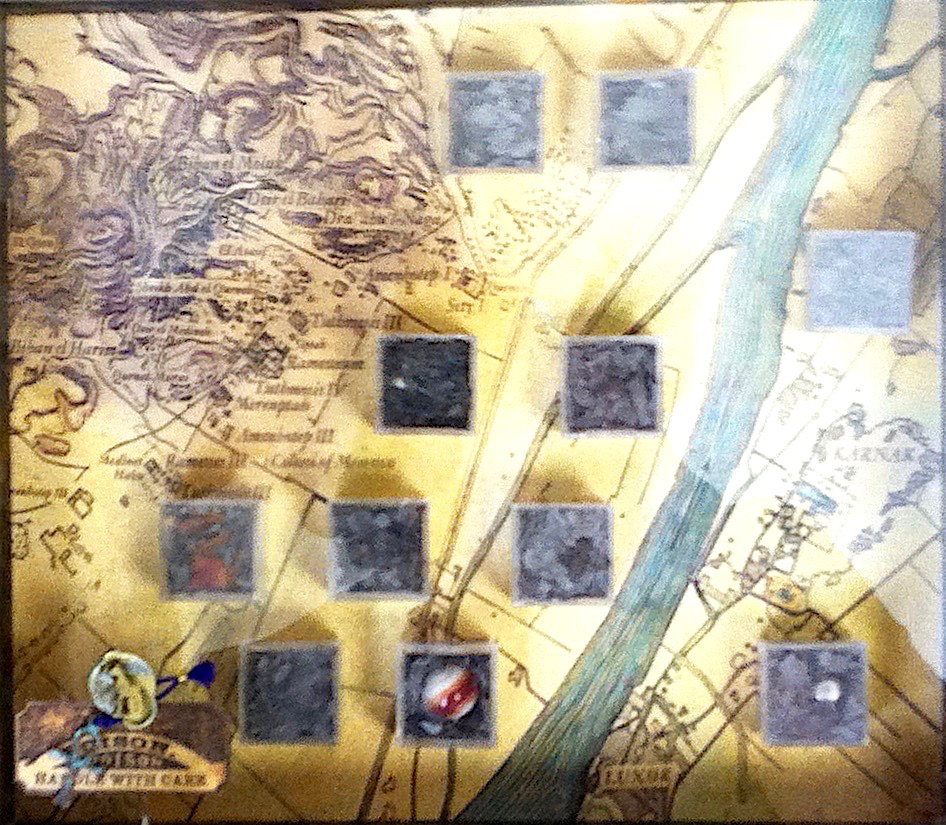 Sekhmet’s Casket is at once a reverent homage to 19th-century art and early 20th-century archeology; and an examination of an artist’s methodology.

The book is dominated by the romantic watercolors of David Roberts, who documented early archeological excavations in the Middle East. These glorious watercolors are magical and I used as many as I could. I also included title pages from some of the more significant books documenting early travel in Egypt. As a former rare book curator, I fell in love with these illustrations and books, especially the monumental Description de l’Egypt, the exquisitely detailed record of Napoleon’s invasion.

There is a little-known tradition among magic practitioners of making a box dedicated to the Egyptian goddess Sekhmet, in which to enclose memories that can be offered up to the goddess and burned away in her fires. This is the conceit I chose, making the box appear to be a traveling case of an early 20th-century archeologist.

Sekhmet is one of several changing aspects of the Egyptian goddess Mut, wife of Amun and mother of all the gods. Mut’s aspects changed over 1000s of years, as she became first Sekhmet the fierce lion-headed protector of Egypt. Bastet, a later manifestation of Mut, was first considered ferocious too, but with the domestication of cats (circa 1500 B.C). her attributes shifted, revealing a more nurturing and approachable deity. Mut in all her aspects always holds the symbolic ankh, key to the Nile and the breath of life. Thus, the ankh mounted on the miniature papyrus book is placed on the right side of the box, the conscious and rational side of the individual. The unconscious and symbolic aspects appropriately are placed to the left side of the box. Likewise, the top section of the box represents consciousness or semiconsciousness of the artist, while the drawer more appropriately represents the unconscious. Enclosed in the top section of the box is a map of the sacred precinct of Mut at Karnak. And in the drawer below, an expanded map of Karnak, in which the Precinct of Mut is a part. Burned immolations buried in the sand around and near the precinct are meant to be unopened and protected by Mut.

Since I have always loved classic British mysteries of the 1930s, I wanted to include the quote from Agatha Christie’s Death on the Nile that I thought startlingly appropriate:

Once I went professionally to an archaeological expedition–and I learnt something there. In the course of an excavation, when something comes up out of the ground, everything is cleared away very carefully all around it. You take away the loose earth, and you scrape here and there with a knife until finally your object is there, all alone, ready to be drawn and photographed with no extraneous matter confusing it. That is what I have been seeking to do–clear away the extraneous matter so that we can see the truth–the naked shining truth. ~ Hercule Poirot

Each of the corked bottles contains personal memories—scents or mementoes or stones—that have multiple meanings. But it is through the informational cards and the “newspaper clippings” that the real investigation emerges. I wanted to elicit a silent discussion with the viewer about what exactly is an artifact and how we as artists approach art. I think this is the most important part of the book. Artifacts in themselves mean nothing. It is only when they are interpreted that they become invested with meaning.

Thus, our knowledge of the world and of ourselves is not grounded upon the material evidence itself. It arises from the interpretive strategies that we bring to bear upon the material evidence. It is process, not research results or finished artist’s book, that provides the deepest insight for the artist. Throughout, I sought to make this book open-ended, so that the reader would be not only engaged, but could extrapolate whatever personal experiences that might be elicited.