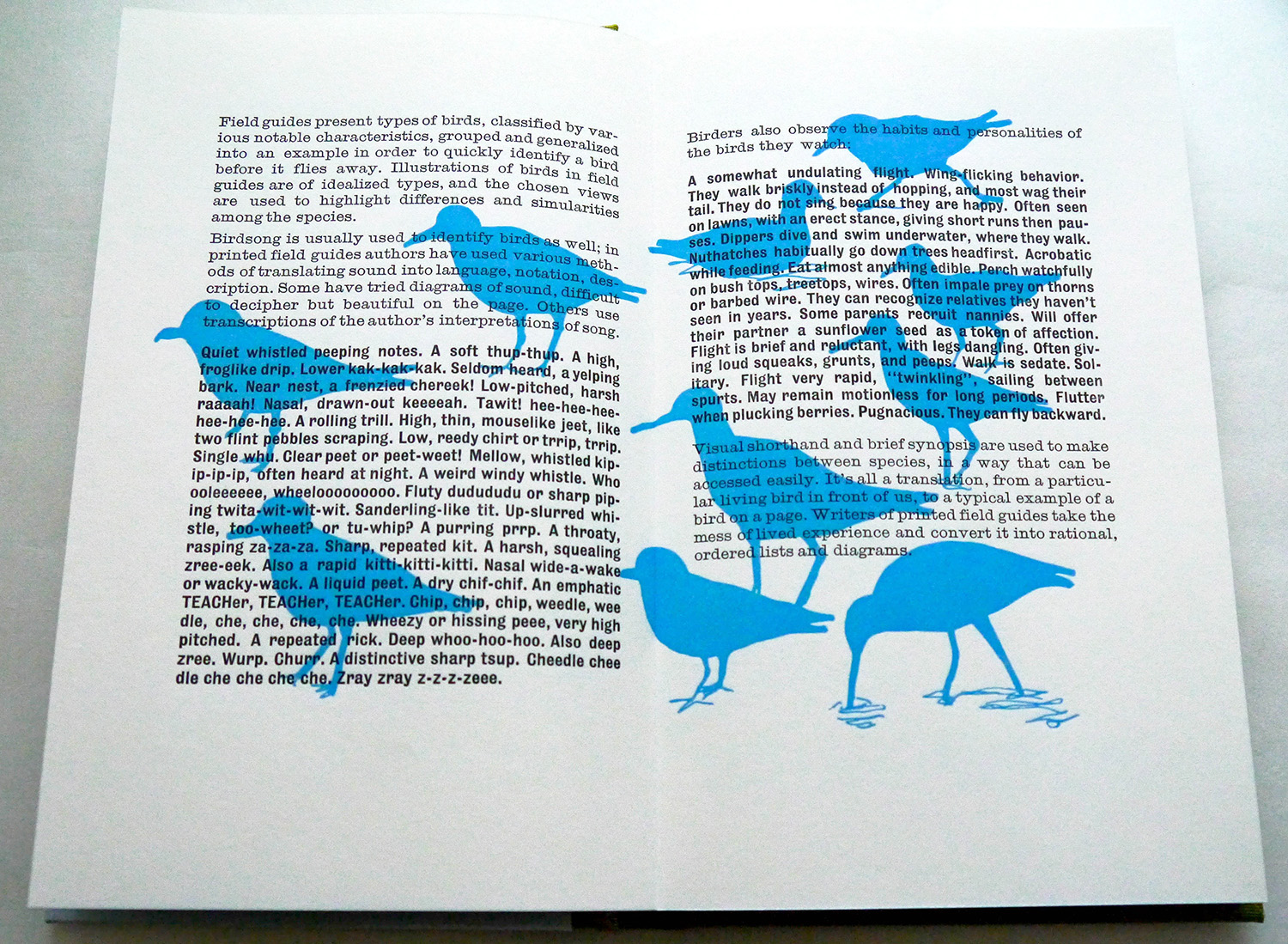 A Field Guide to Extinct Birds, cover view. The book is a drum-leaf case bound book of 30 extinct birds with accompanying text. The cover is letterpress printed on Zerkyll Ingres; the spine and back cover are covered in Japanese silk. The cover image is printed from a plate made from one of a series of drawings I made based on typical introductory diagrams in vintage field guides. This image shows a selection of typical head shapes of various species, originally used to teach birders how to visually recognize the various types.

Interior spread: The Dodo. This spread shows everyone’s favorite extinction celebrity, The Dodo. Each bird in the book is printed from a reductive woodcut, in three to seven different color runs, depending on the bird. The drum-leaf binding was chosen so I could include a full image of each bird across each spread.

Interior spread: Wake Island Rail
The text that accompanies each bird discusses where the bird lived, how the bird disappeared, what we know, or often don’t know about it. The entire book is handset in metal type; the body text is set in Consort Light with titles in Caslon Italic and Grotesque No. 9.

Interior Spread: Birdsong and behavior
The book also includes information about the current role of the field guide, and other speculative information about birds books, extinction, and the history of birding. This spread talks about the kinds of printed language specific to printed guides: silhouettes to help beginners to recognize different species; transcriptions of sound to written language to describe birdsong; generalizations about the behavior of different species. I am interested in what is lost in the transition from paper reference book to multimedia application, and what kinds of visual and verbal language were specifically invented for the printed format.

Interior Spread: Laughing Owl
Many birds included in the book are only known through drawings made by amateur naturalists; their appearance, translated into a woodcut, is based on another artist’s interpretation of a bird they often knew little about. Evidence of where they lived, how they lived, and why they no longer exist is often scant, and based on incomplete or obviously fantastic contemporary accounts. This spread documents the supposed love of New Zealand’s Laughing Owl for the accordion.

A Field Guide to Extinct Birds is a hand bound, letterpress printed collection of extinct birds from around the world. It is a consideration of the history of field guides, and the unique qualities that print brought to the field guide, and to bird books in general. It is also a celebration of the rich history of the bird book, a lament for many species we have lost, an examination of mistakes we have made, and a warning for the future. We live in a time of mass extinctions; over the last half a billion years there have been five major extinction events, time periods where the diversity of life suddenly and dramatically has decreased. We are living through the sixth major mass extinction. It is not guaranteed that humans will survive.

We are also living in a time of technological transformation which seemingly affects all areas of life. Including, as it happens, the publishing of field guides. Field guides are a distinctly utilitarian subspecies of bird book, which are currently transitioning from printed language to digital media. I began this project with these two ideas in mind. I was interested in the relationship and the differences between obsolescence and extinction, in how we remember that which we lose, and what that process looks like. As the utilitarian book loses its place in the field, it opens up the opportunity for artistic speculation. Much of the book is concerned with what we don’t know, or what we guess to be the truth; the printed word carries with it a sense of authority that is undercut by the uncertainty of knowing what happened to many of these birds.

In the course of researching extinction and the history of ornithology, I was led down many different paths: the history of exploration and the voyages of Captain James Cook. The development and the ethics of natural history collections. The publishing practices of Alexander Wilson and John James Audubon. The practice of island biogeography. Feathers and the hat trade, women bird enthusiasts and the professional ornithological community, rarity and scarcity, invasive species and isolated populations, the causes of extinctions: the list grew and grew. In order to keep my publishing project somewhat reasonably scaled, I decided to document the research portion through a website: www.fieldguidetoextinctbirds.com. There I could follow these various threads, and then condense the essential elements into a text to set by hand in metal type, and images to carve into wood. The project as a whole became an experiment in interdisciplinary research, expressed through digital information and metal type. The printed book is a container for the distilled essence of what I learned.