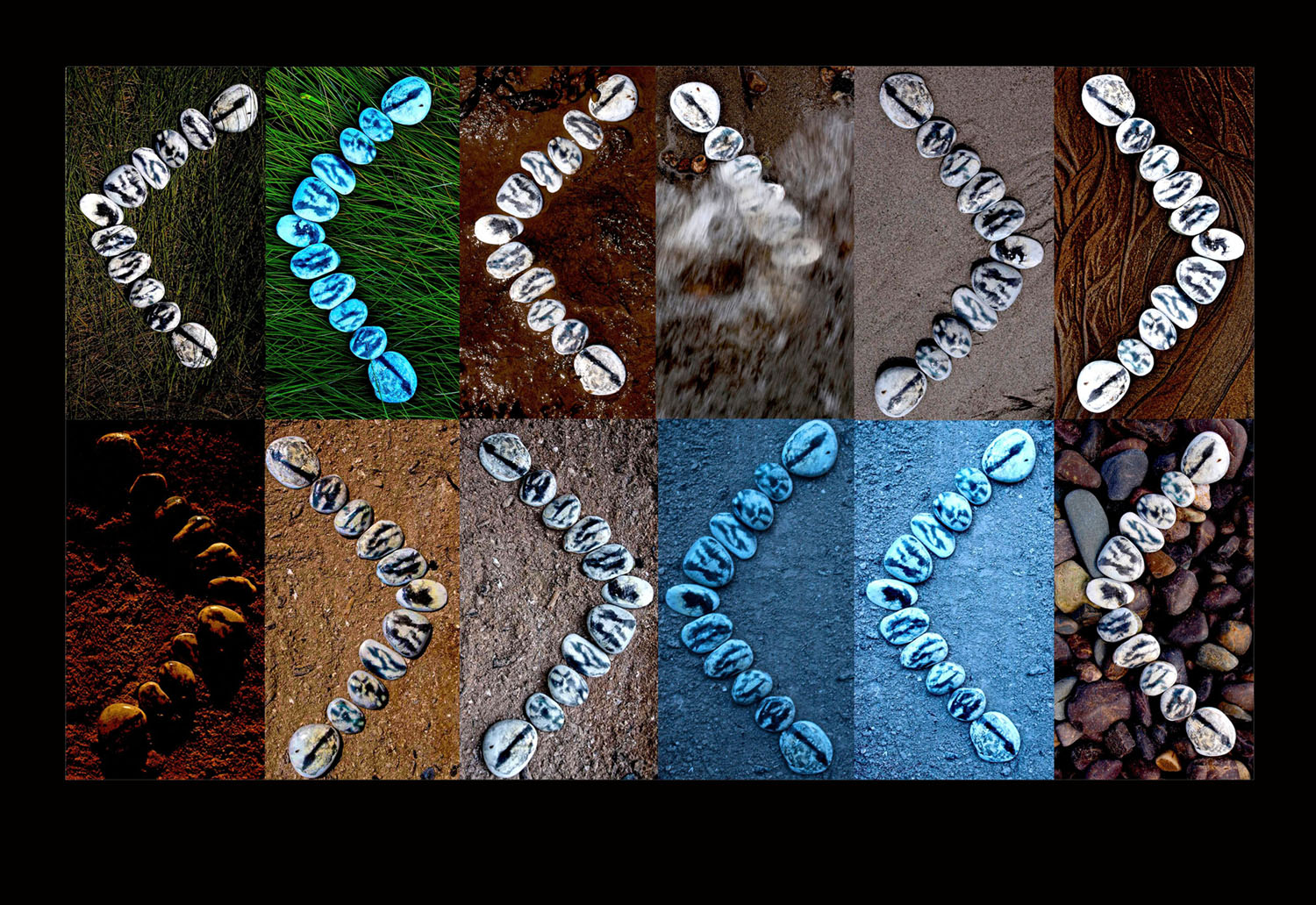 This image shows the artist’s book with its blue-grey, cardboard cover partially removed. The title is blind-stamped on tan paper, glued to the front.

The book with its cover removed. Each segment of text is tucked into an acid-free mylar slot. The 29 image cards sit in a half-inch well in the center of the book; they’re easily removed by lifting the black ribbon.

This image shows the book with the first text segment removed. Each segment was printed on acid-free vellum; the first, titled one (only) consists of two pieces of 11 x 17 vellum spliced together with vellum tape, as it’s a bit longer than the others. After they were printed, I hand-folded each sheet of vellum to fit into the mylar slots, and angled the edges to suggest the look of a frame. I conceived the essay in four moveable parts, so it can be read in any order (though clockwise is best).

In this photo several image cards have been removed. The highlighted image in the center is called “World Clock at Twilight with Seaweed.” The shadows printed on the pebbles (taken at 9:30 am, 1:30 pm, 3:30 pm and 4:30 pm) evoke the same moment in four different time zones, recalling the way my thoughts traveled as I hiked the Canyon one windy day in January, 2011. I later shot the printed pebbles at twilight on seagrass, which I then superimposed atop seaweed on a Maine beach, suggesting the layers of the Canyon’s strata, particularly the eon in which Arizona was covered by a warm, shallow sea.

This photo is a detail of just one of the 26 image cards. The work is called “AfterImage Evolution.” The backgrounds suggest different eons of the Canyon’s development (from grasslands to seaboard to volcanic ash), shot at different times of day. The boomerang design of the pebbles evokes not only Native American motifs, but an “after image” that I woke one day at the Canyon to find plastered on my field of vision. It looked just like the shapes depicted, but it wasn’t the after image of anything I’d seen. My best guess is that it resulted from sleep deprivation due to altitude sickness. The “AfterImage” became a motif in my petrograph installations.

“Petrograph” is a term I made up, referring to silver gelatin images printed on stone. My name — Petro — means rock in Greek. So I consider my work with petrographs to be a stroke of luck, or of fate.

Nomadic tribesmen in Siberia memorably called view cameras, “three-legged devices that draw a man’s shadow to stone.” Petrographs do the same thing. By casting and briefly fixing our shadows to the bedrock, they juxtapose the “snapshot” span of mortal memories with the vastness of geological time. And that puts humans’ experience on earth back into perspective. We are not the planet’s masters. We’re just one of many species passing through deep time.

After harvesting rocks from rivers, seabeds, and quarries, I coat them in photographic emulsion, print them, and return them to their original locations to let time, weather, and other environmental factors reclaim the rocks. Petrographs place the hours, days, and years of our lives in geological perspective, reminding us of the relativity of perception.

AfterShadows grew out of my time as an Artist in Residence at the Grand Canyon in 2011. I was struck by the Canyon’s immense shadows, cast by its eroded rock formations. I took photos of the shadows and printed them on tiny white beach pebbles from the Bay of Fundy, with each shadow corresponding to the time of day it was cast. I then arranged the pebbles to tell chronological narratives of walks I took in the Canyon, or of places around the globe in different time zones at the same moment. In reference to the varied eons of the Canyon’s history, I digitally photographed the pebbles against different backdrops such as the tideline on a beach, mudflats, meadow grasses, or ash, and also at morning, noon and night.

There are 26 original photographs printed as 4 x 6 postcards in the central well of the book, in addition to a title page, a signed and numbered colophon, and a page with a QR code to be scanned by anyone with a smartphone. The code leads to an 18-part weekly blog on my website, which ran from fall 2011 to winter 2012, and chronicled the idea of AfterShadows from its inception at the Grand Canyon.
After I printed the images I wrote a four-part essay called “Erosion” (also published online in the literary journal Lumina in spring, 2015), which tells tales around the story of how they came to be. Because the images came first, and only later were conceptually framed by the text, I chose to literally recreate that experience for the reader/viewer of the book, which accounts for its design. The essay is ideally ready clockwise from the top, but may be approached in any order at all. Its four, accordion-pleated sheets of printed vellum slip into clear envelopes of mylar arranged around the images.

To honor the fact that the Grand Canyon is a public monument, accessible to all, I chose to keep the cost as low as possible so that the book would be accessible as well, and not prohibitively expensive. Amy Borezo, of Shelter Bookworks in Orange, MA, built the box to my design using simple materials, and we kept the size small at 7.5” x 9.25”. I think of it as the “paperback” version of a “hardback” artist’s book yet to come.