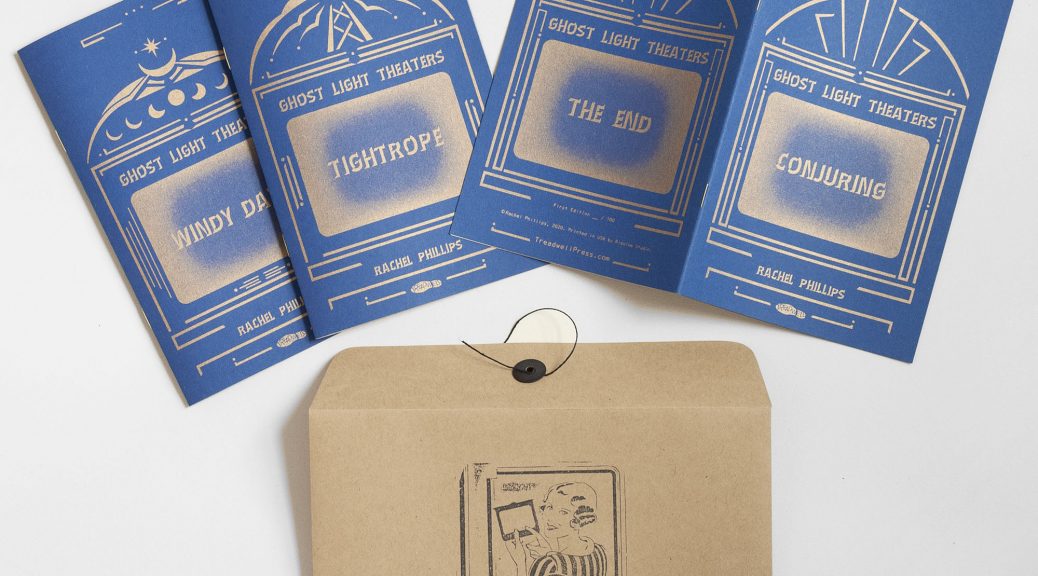 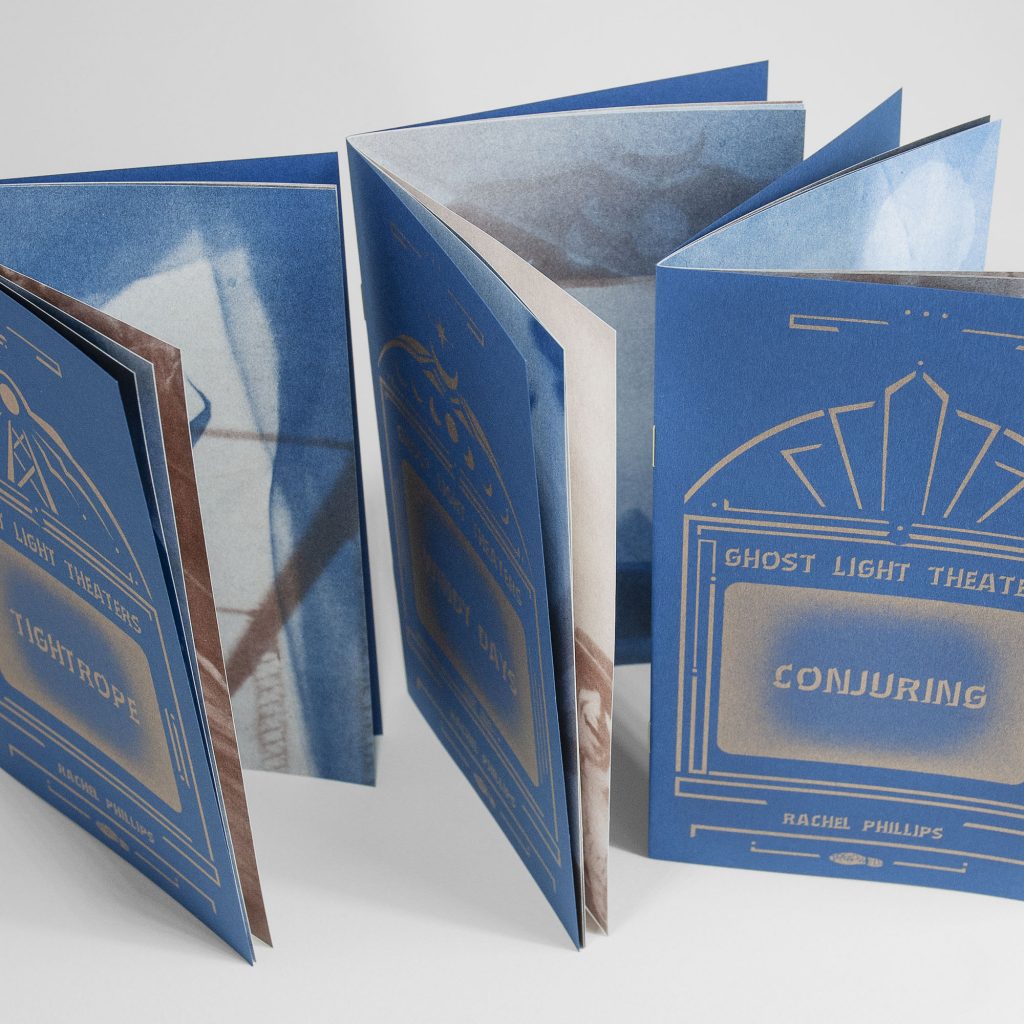 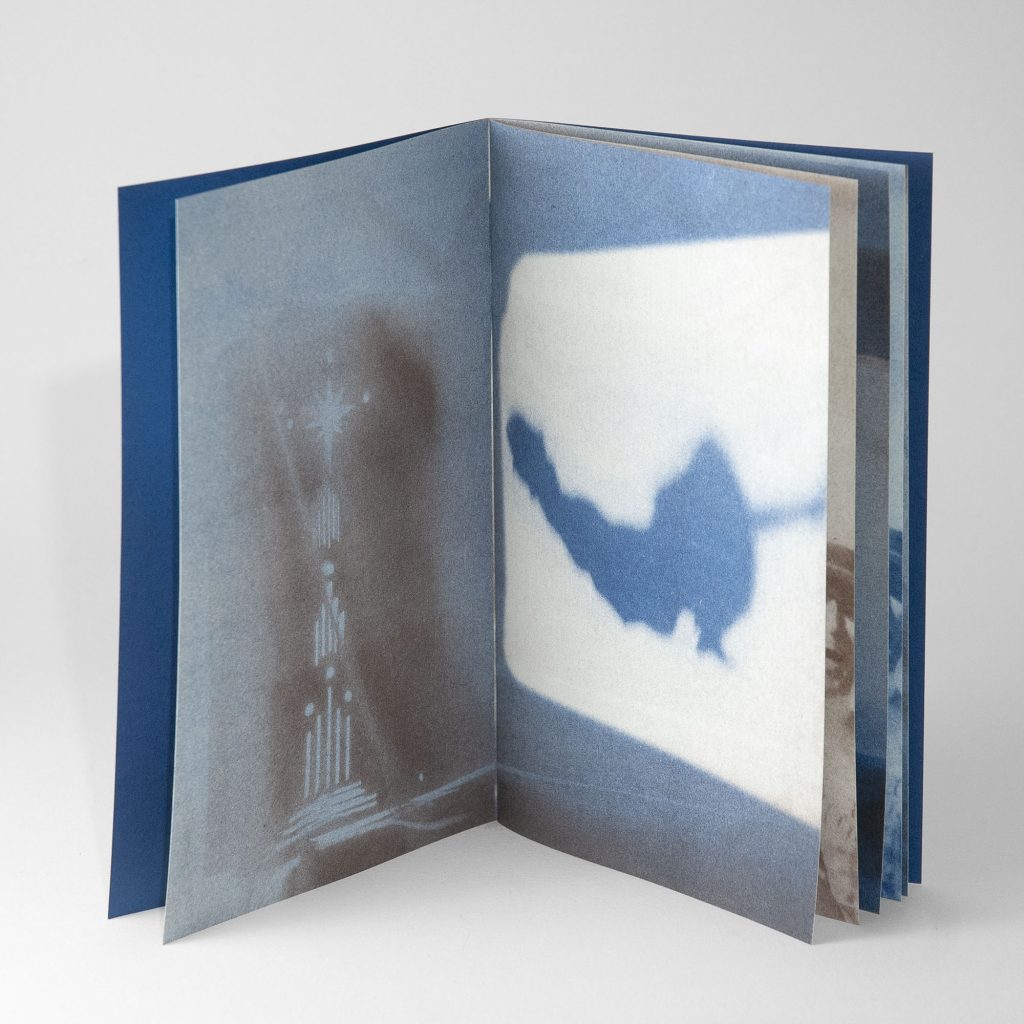 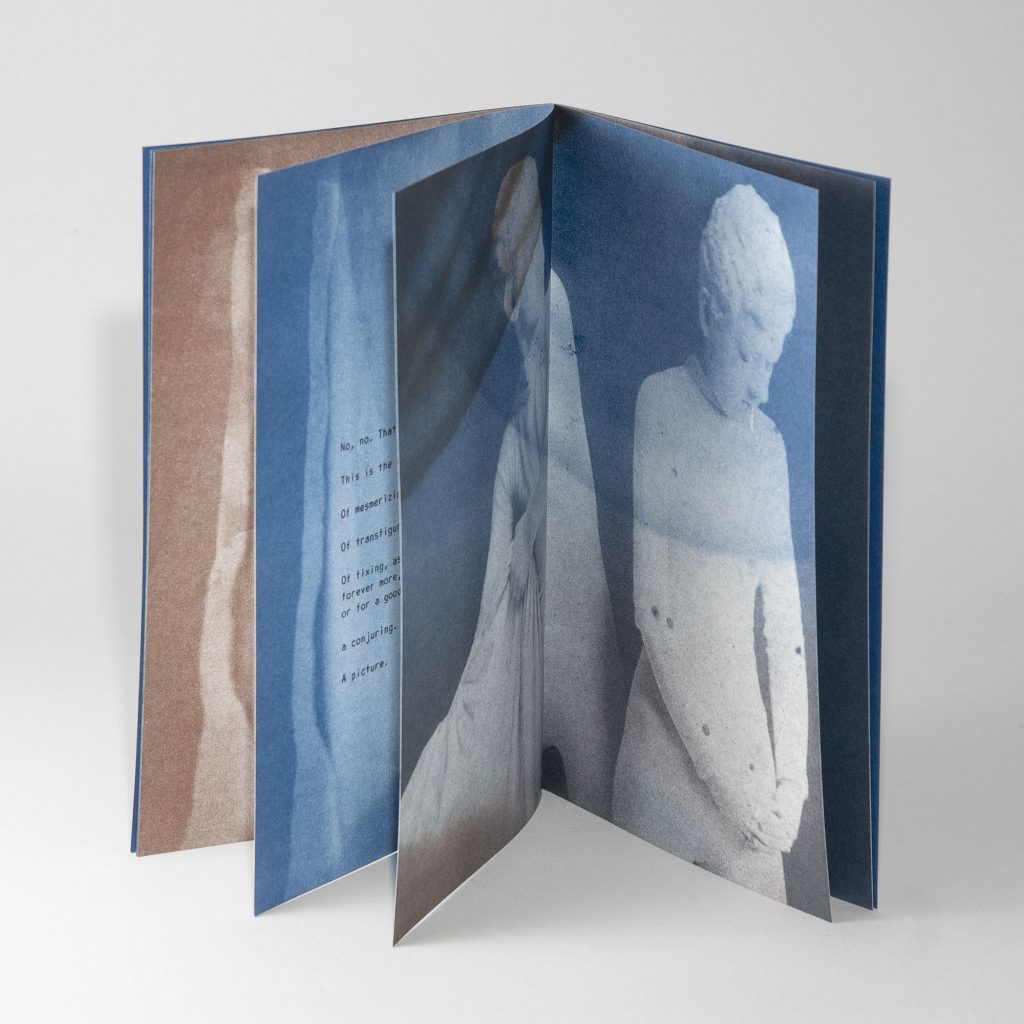 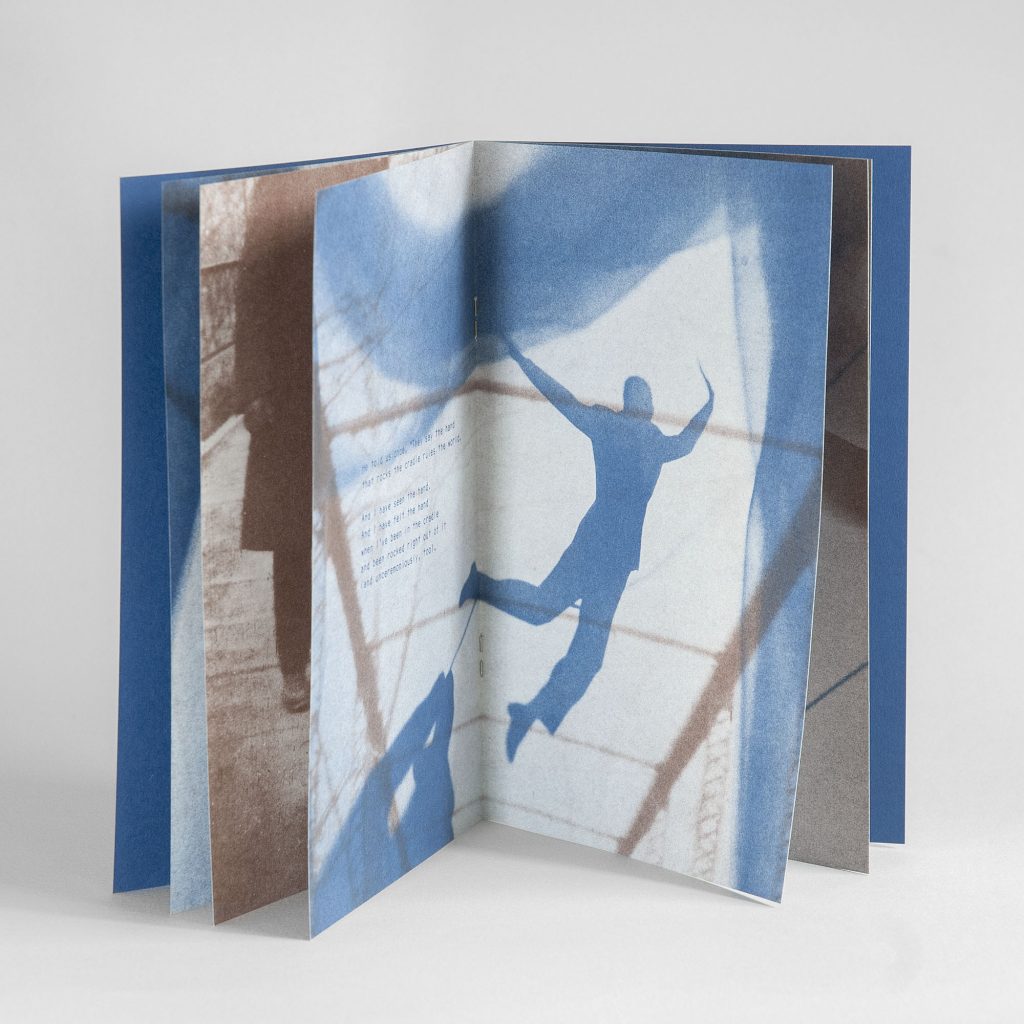 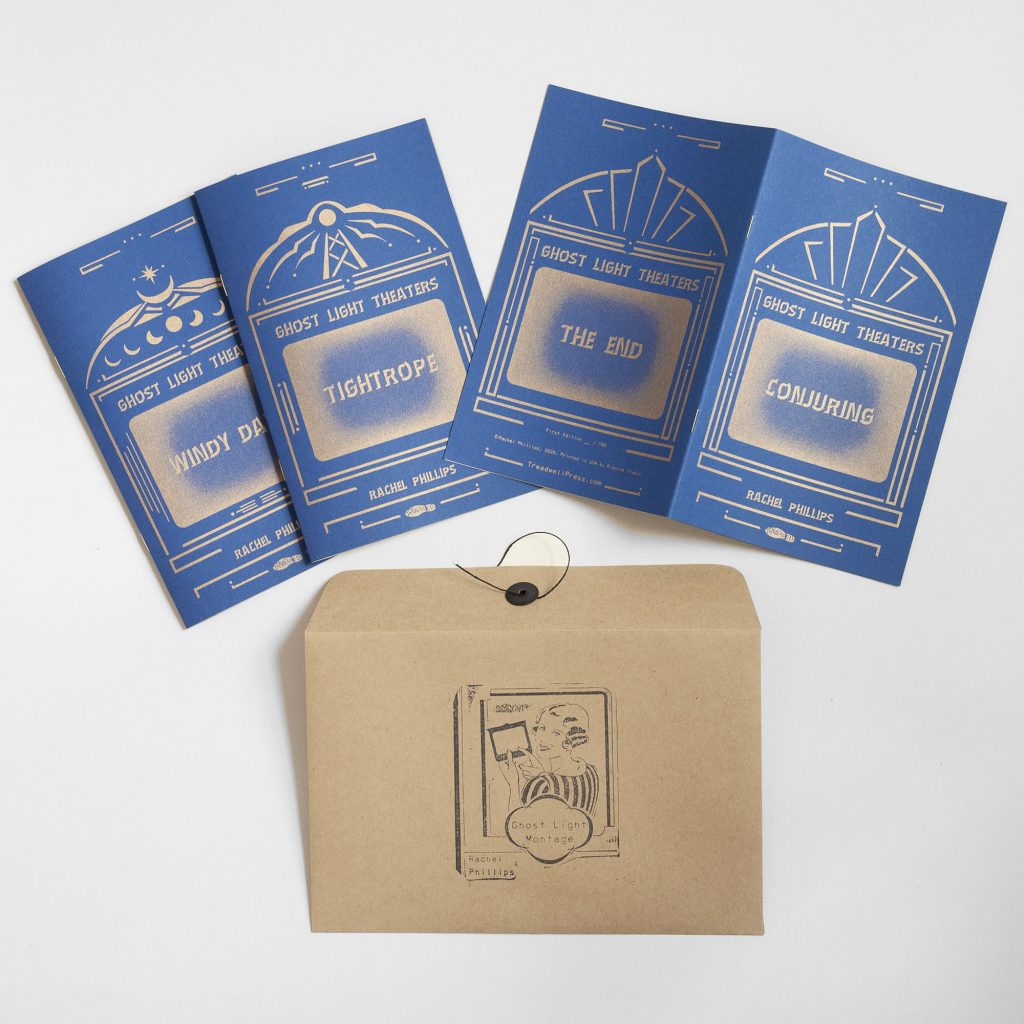 Ghost Light Theaters is a book in three parts. Each booklet in the set aims to create a narrative, cinematic experience akin to a silent film—from the front cover presenting the opening title of the “film” on a theater screen to the back cover printed with the words “The End.” Broadly, the books triangulate between photography, film and theater—three mysterious and evocative dark spaces where, paradoxically, stories are captured and retold through light.

The title of the work comes from the theatrical term ghost light. A ghost light is a single bulb left illuminated near center stage when a theater is unoccupied and would otherwise be completely dark. Superstition holds that a ghost light provides opportunity for the resident ghosts of the theater to perform onstage when everyone else has left for the night. What are the plays enacted onstage while everyone sleeps? Similarly, what are the unseen lives of pictures before they are developed? Ghost Light Theaters explores the agency—by turns serious, playful and even absurd—that stories might have to tell themselves beyond our directorial intent in making them.

Ghost Light Theaters blends numerous elements. Each booklet is built around a single vernacular photograph (reproduced on the last page) that appears repeatedly in various forms across the pages—like an image on a contact sheet, frames in a film, or even scenes in a play. In this way, the books use the temporal experience of turning the pages to explore the historical and conceptual bridges between still and moving images, between suspending time and moving through time. Other imagery includes figures in silhouette which were carefully cut out and photographed as shadows—ghosts. Art Deco architectural motifs, paying tribute to the golden age of cinema and movie palaces, appear as well in photographs made from theater models I designed and fabricated. Finally, each book utilizes a short original prose poem to suggest character and story.