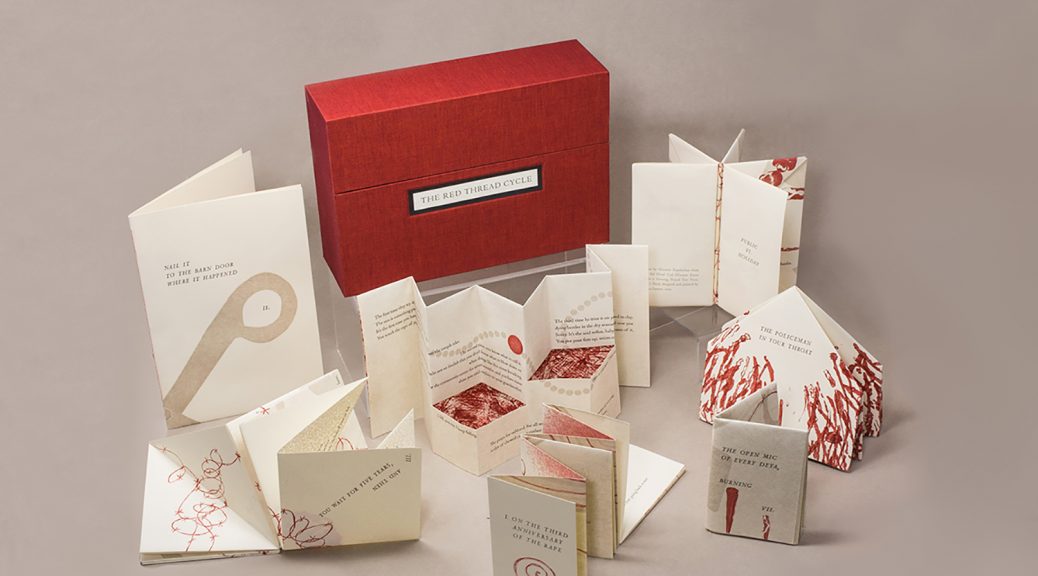 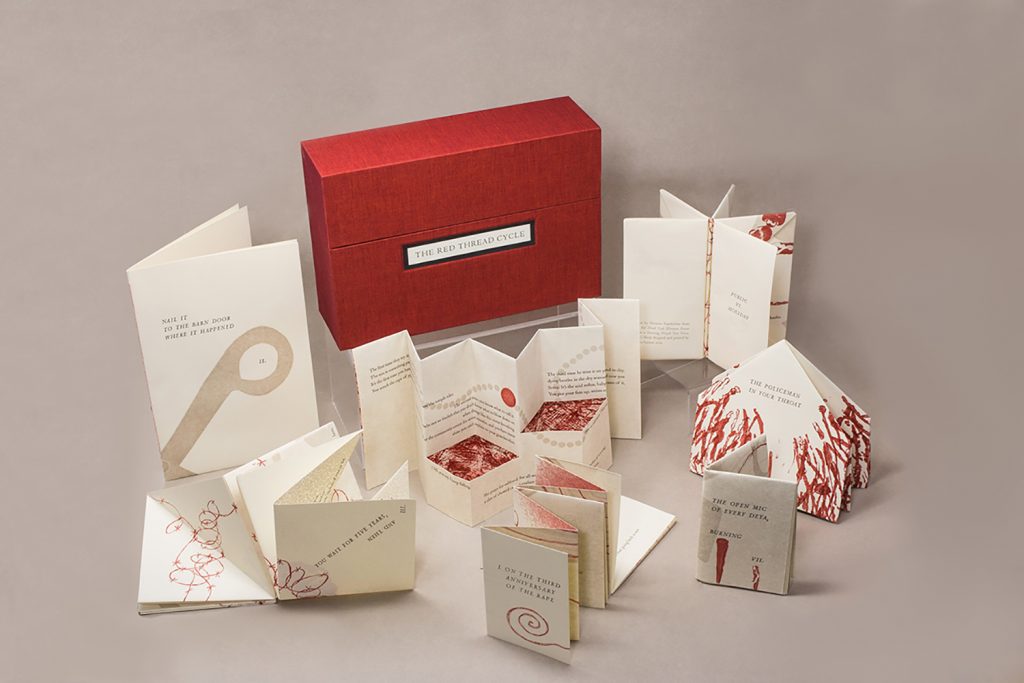 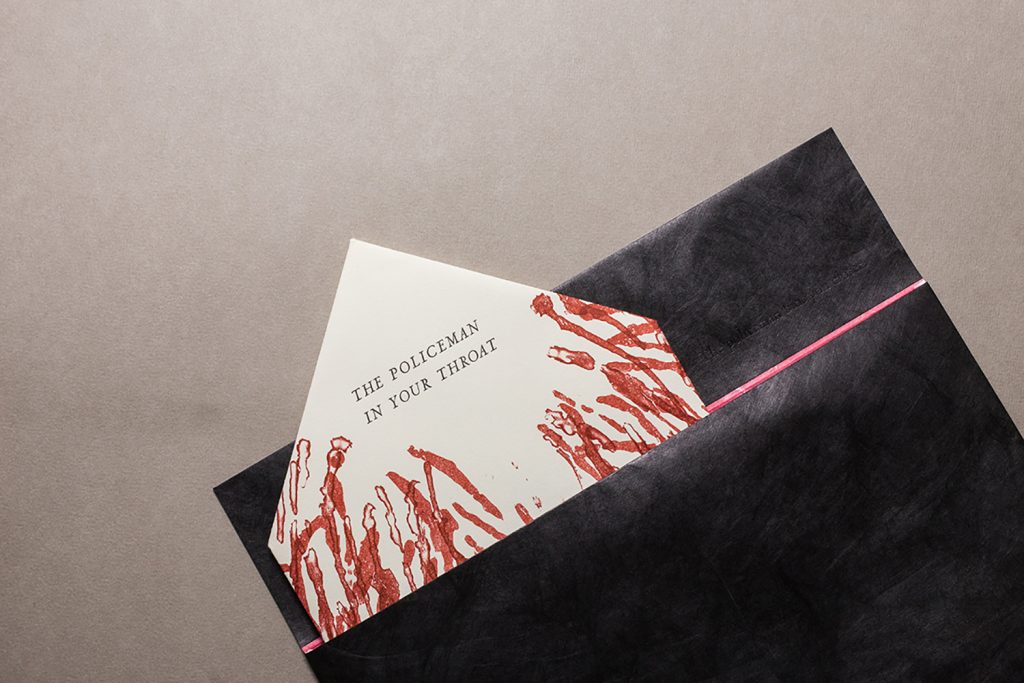 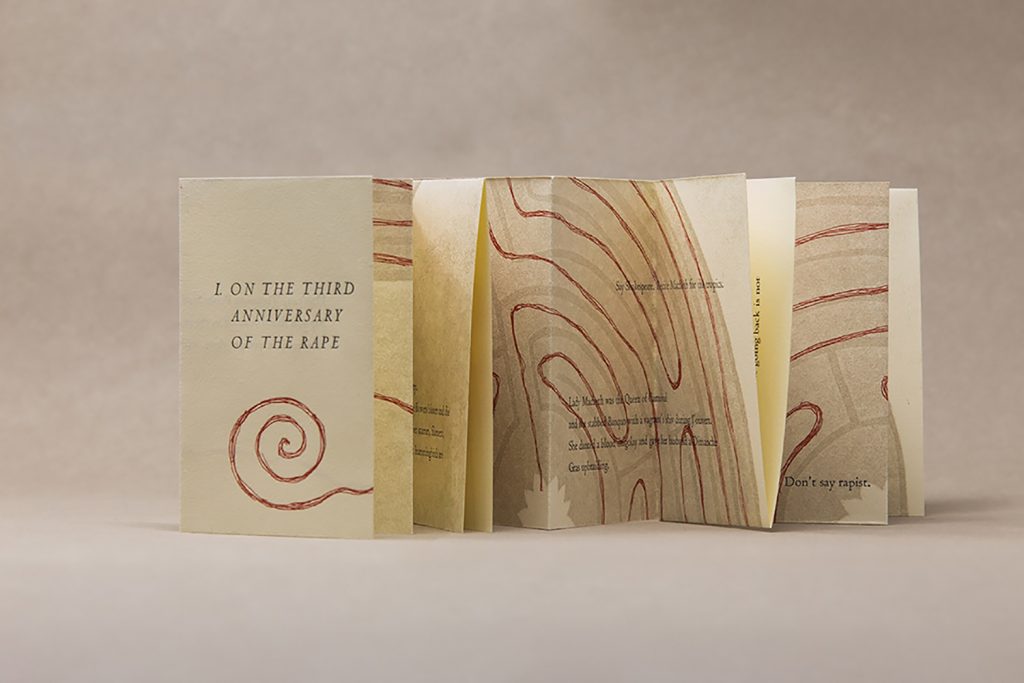 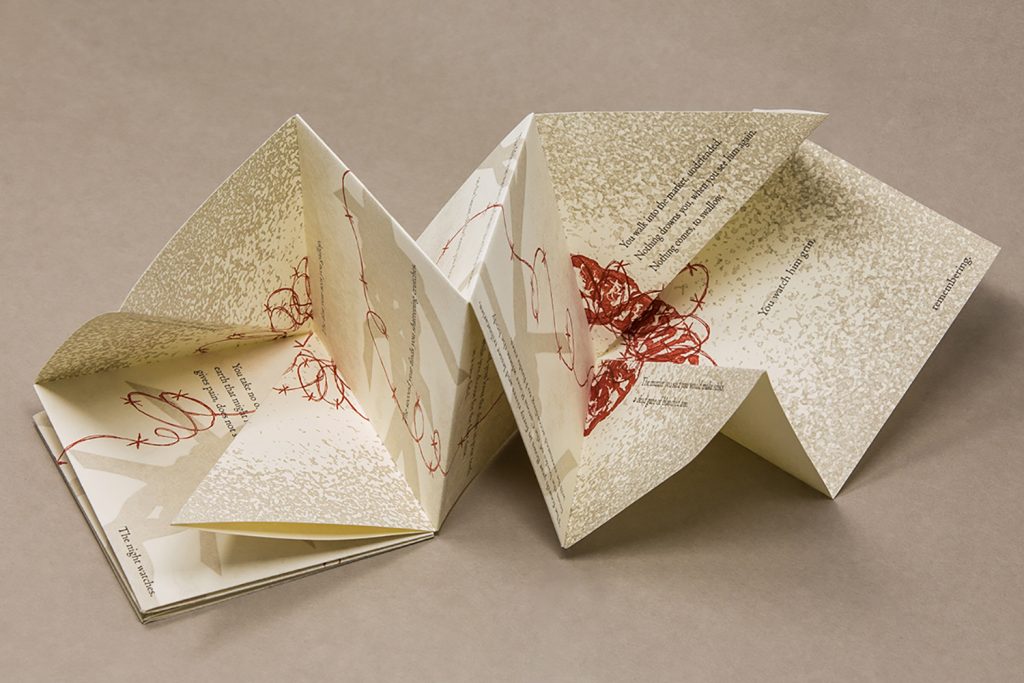 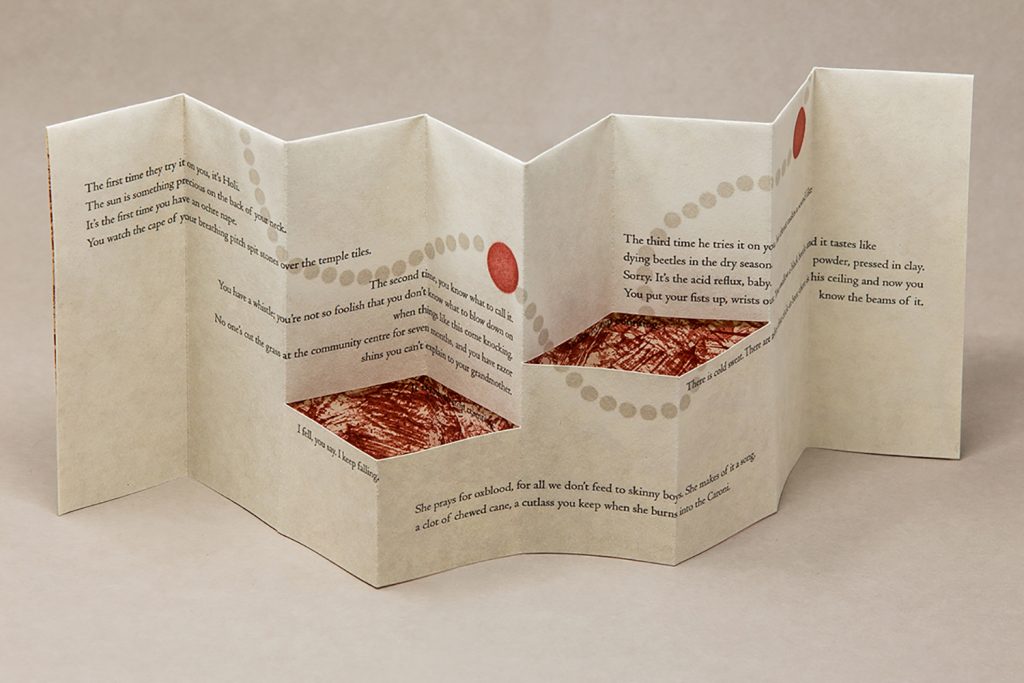 The Red Thread Cycle (2019) provides gut-wrenching witness to the realities of sexual assault in the Caribbean region. The starting point for this work is a series of seven poems by Trinidadian writer Shivanee Ramlochan that appear in her first book of poetry, Everyone Knows I Am a Haunting (Peepal Tree Press, 2017). I felt a powerful connection with what she calls the “spine” of this collection that catalogues seven experiences of sexual assault and their aftermath, The Red Thread Cycle. Even though the series is rooted in the cultural space of Trinidad, the poems nevertheless remind their reader of the violence that disproportionately affects our region of the world. They are hard poems to digest, but we must be open to what the pain of these poems teaches us about trauma and survival in the Caribbean. We have to look.

That realization, or command, or mantra—we have to look—became my guide for engaging meaningfully with the poems through an artist’s book that demands from its readers this same careful but sustained engagement with such trauma and survival. Each poem deserves its own consideration of form, pacing, and reading, so I used a different folding structure for each one, allowing the seven different voices in the poems to share their own individual encounters within the overall experience of sexual trauma. These books reinterpret their original linear poetic forms, each structure inhabiting the individual voice of the poem to refract and reflect its narrative, allowing the reader to access its core emotional complexity as they engage with each piece. For example, Book I, On the Third Anniversary of the Rape, uses an “ox-plow” structure to locate the reader within the labyrinthine environment of the poem, and Book VI, Public Holiday, uses a blizzard book to conceal and reveal text to explore alternative narratives about a sexual encounter.

Though they have different structures, these books are linked by medium (letterpress-printing), typeface (Centaur), materials (Rives Lightweight), color palette (red, black, and warm grey), propor- tions, and most importantly, repetitive imagery. These images, made through pressure printing and experimental platemaking techniques with often unpredictable outcomes, create a necessary raw aes- thetic to accompany the prose, which is layered and repeated throughout the books to take on multiple meanings in their fragmented silhouettes and abstract forms.

Presented as a rape kit, each book is stored in a black Tyvek envelope with its corresponding number letterpress-printed on the outside flap, and the first line of the poem on the inside of the flap, as if they are catalogued pieces of evidence. The reader encounters a red stain on the inside when they lift the flap to remove the book. Housed in a handmade filing box, the set also includes an envelope con- taining an audio recording of Shivanee reading all seven poems to provide readers with an immersive experience of listening as well as engaging, a total confrontation of the senses that readers must find the willingness to endure for all of the rewards that such witness can hold.