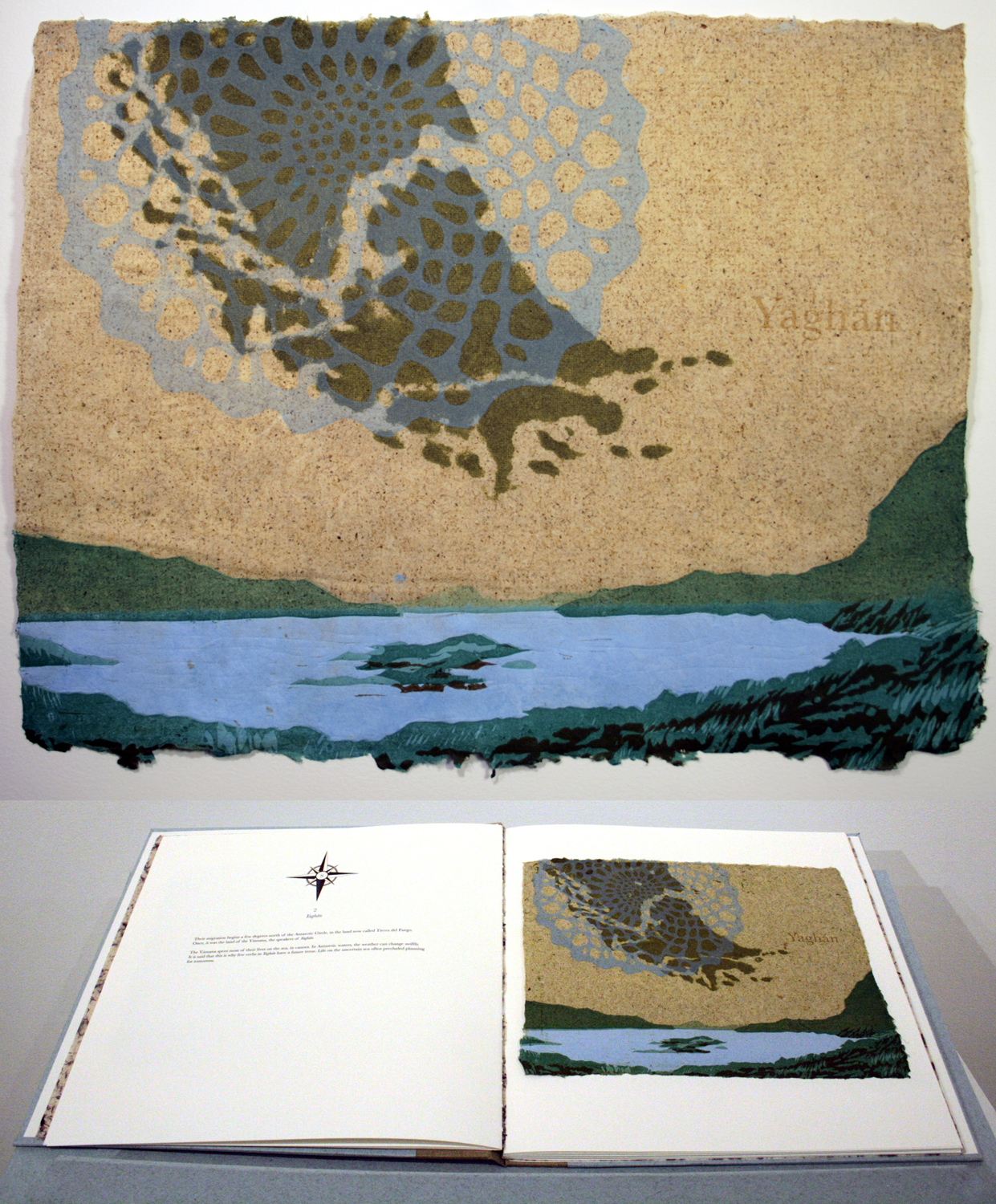 This image shows the cover of the book.

This image shows both the structure of the book with the tipped in handmade papers, as well as a detail of the tipped-in handmade paper. This spread introduces the geography of Tierra del Fuego, the non-breeding grounds of the Red Knot, and Yaghán, the indigenous language of the Yamana people of the islands.

This image shows structure and a handmade paper detail. It introduces Sima, the Yahghán word that literally means water, while suggests the deeper meaning of water as part of the relationship between the sea-faring Yamana and the natural world.

This image shows structure and a handmade paper detail. It introduces Unikkaaqtuat, an Inuktitut word that is translated into English as “old stories.” These stories are not only the basics for Inuit metaphysics, but also communicate how to survive in the Arctic landscape, and some of their meaning is lost in languages other than Inuktitut.

This image shows structure and a handmade paper detail. It introduces Sápa, a Yamana word that means “blood” or “bloodline.” In the past two hundred years, many Yamana bloodlines have been lost due to European diseases. During the same time period, a new species has been introduced to the islands of Tierra del Fuego: beavers. Beavers, by cutting down the native trees, building dams, and wrecking havoc on the native ecosystems, have become a symbol to Fuegan dwellers of the escalating transformation of the archipelago.

I explore how intersecting narratives can reveal insights and parallels into one another. In Future Tense, the confluence of endangered species and endangered languages becomes a rumination on the overall loss of diversity and affects of Westernization throughout life on this planet. The structure of this book was inspired by 17th and 18th Century Spanish books on the navigation of the “Mares del Sur” or “South Seas” – the oceans of the southern hemisphere.

The book begins with the endangered Red Knot (Calidris canutus rufa). This species has a remarkable migration, spanning from Tierra Del Fuego to the reaches of Northern Canada. As of 2011, the species numbered roughly 5000 (down from an estimate of millions), despite efforts to protect it and its habitat. This migration is central to the narrative, and as it travels back and forth between the northern and southern hemispheres, two endangered, indigenous languages are introduced: Yaghán, in Tierra Del Fuego, and Inuktitut in Northern Canada. As readers follow the migration, actual words from each language are presented, and the essence and significance of their meaning is conveyed through text and image. As the narrative progresses, the birds’ migration and the languages interweave into a complex reflection on a rapidly changing world.

As a material signifier for colonization, the tipped-in handmade papers within this book are made from invasive plants I harvested from where I now live in California. Species harvested include: French broom (Genista monspessulana); Andean pampas grass (Cortaderia jubata); iceplant (Carpobrotus chilensis); and Artichoke thistle (Cynara cardunculus). These species were selected because they are botanic colonizers, plants that take over a landscape, create monocultures and drive out native diversity.

An enormous amount of research went into this book. My main sources were Hugh Brody’s The Other Side of Eden, Martin Gusinde’s Folk Literature of the Yámana Indians and Luis Borrero, Colin McEwan and Alfredo Prieto’s Patagonia: Natural History, Prehistory, and Ethnography of the Uttermost End of the Earth. However, these Western anthropologists, ethnographers, and linguists hold their own biases and misunderstandings. I have tried to remain true to their best interpretations—but mistakes do happen—and any errors in the text are mine.

Many thanks go to the Puffin Foundation, for generously providing funding for this book. This book is dedicated to Cristina Calderón, the last fluent speaker of Yaghán, and whose portrait is featured in the eighth section of this book.